Brăila
For the village in Chişinău municipality, Moldova, see Băcioi.

listen); Greek: Μπράιλα; Turkish: İbrail) is a city in Muntenia, eastern Romania, a port on the Danube and the capital of Brăila County, in the close vicinity of Galaţi.

According to the 2002 Romanian census there were 216,292 people living within the city of Brăila,[2] making it the 10th most populous city in Romania.

Brăila in an early 1900s postcard.

An overview of Brăila in late 19th century or early 20th century.

A settlement at this location on the left bank of the Danube, in Wallachia, was mentioned with the name Drinago in a Spanish Libro de conoscimiento ("Book of knowledge", circa 1350) and in several Catalan portolan charts (Angelino de Dalorto, 1325/1330 and Angelino Dulcert, 1339). This may have been an erroneous transcription of Brillago. In Greek documents of roughly that time, the city is referred to as Proilabum or Proilava, a Greek language adaptation of its Slavic name, Brailov. In German language sources, it is mentioned as Uebereyl. The origin and meaning of the name is unknown.

As a kaza, the town and its surrounding area was controlled by Ottoman Turks from 1538–1540 until 1829 (it was restored to Wallachia through the Akkerman Convention); the Ottomans called it Ibrail or Ibraila.

Brăila was attacked, plundered, and set fire to by the forces of Moldavian Prince Stephen the Great on February 2, 1470, during the retaliation campaign against Wallachian Prince Radu the Fair, who had allied himself with the Ottomans. It was briefly ruled by Michael the Brave, prince of Wallachia (1595–1596).

During the 19th century, the port became one of the three most important ports on the Danube in Wallachia, the other two being Turnu and Giurgiu. The city's greatest period of prosperity was at the end of the 19th century and in the early 20th century, when it was an important port for most of the merchandise coming in and going out of Romania.

After the 1989 Revolution, Brăila entered a period of economic decline.

According to the last census, from 2002, there were 216,292 people living within the city of Brăila.[6] The ethnic makeup is as follows:

Accessible to small and medium-sized oceangoing ships, Brăila has large grain-handling and warehousing facilities. It is also an important industrial center, with metalworking, textile, food-processing, and other factories. 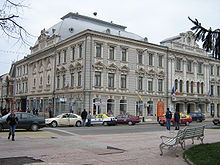 Streets radiating from near the port towards Brăila's center are crossed at symmetrical intervals by concentric streets following the geometric design of the old Ottoman fortifications.

The old center of the city has many 19th century buildings, some of them fully restored. The most important monuments are the Greek Church, erected at 1865 by the Greek community, the Sfinţii Arhangheli Church, former jāmi during the Ottoman rule (until 1831), the 19th century Sfântul Nicolae Church, also from the 19th century, the Maria Filotti theatre, the Palace of Culture and its Art Museum, the History Museum, and the old Water Tower. The latter houses a restaurant and a rotation system (360° in one hour).

Another important site is the Public Garden, a park situated above the bank of the Danube with a view over the river and the Măcin Mountains. Early in 2006 the municipality received European Union funds to renovate the old center of the city, aiming to transform Brăila into a major tourist attraction of Muntenia.

The Church of the Holy Archangels is the oldest in the city. Begun in 1667, the former mosque was transformed into an Orthodox Church in 1808.

Brăila features one of the oldest electrical tram lines in Romania, inaugurated at the end of the 19th century and still in use. Brăila's bus system is operated by the town hall in cooperation with Braicar Company, with four primary bus configurations available servicing most of the city.

The city has several local newspapers, including Obiectiv-Vocea Brăilei, Monitorul de Brăila, Ziarul de Brăila and Arcaşu'. It also has three television stations: Mega TV, and the local stations of Antena 1 and Pro TV, and in 2009 ArenaTV established a regional production office.

Brăila is twinned with: