Border
"Borders" redirects here. For the defunct company and its chain of bookstores and subsidiaries, see Borders Group. For other uses of the term border (including people named Border or Borders), see Border (disambiguation). 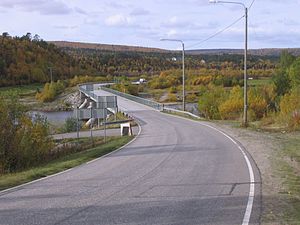 The bridge over the Inari River in Karigasniemi, on the border of Finland with Norway.

Borders define geographic boundaries of political entities or legal jurisdictions, such as governments, sovereign states, federated states and other subnational entities. Some borders—such as a state's internal administrative borders, or inter-state borders within the Schengen Area—are open and completely unguarded. Other borders are partially or fully controlled, and may be crossed legally only at designated border checkpoints. Some, mostly contentious, borders may even foster the setting up of buffer zones. 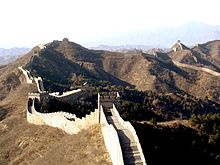 The purpose of the Great Wall of China was to stop the 'barbarians' from crossing the northern border of China.

In the past, many borders were not clearly defined lines, but were neutral zones called marchlands. This has been reflected in recent times with the neutral zones that were set up along part of Saudi Arabia's borders with Kuwait and Iraq (however, these zones no longer exist)[citation needed]. In modern times the concept of a marchland has been replaced by that of the clearly defined and demarcated border. For the purposes of border control, airports and seaports are also classed as borders. Most countries have some form of border control to restrict or limit the movement of people, animals, plants, and goods into or out of the country. Under international law, each country is generally permitted to define the conditions that have to be met by a person to legally cross its borders by its own laws, and to prevent persons from crossing its border when this happens in violation of those laws.

Some legal orders require presentation of passports and visas, or other identity documents to cross borders. To stay or work within a country's borders aliens (foreign persons) may need special immigration documents or permits that authorise them to do so. Having such documents (i.e., visa and passport) however does not automatically guarantee that the alien will be allowed to cross to the other side of the border.

Moving goods across a border often requires the payment of excise tax, often collected by customs officials. Animals (and occasionally humans) moving across borders may need to go into quarantine to prevent the spread of exotic or infectious diseases. Most countries prohibit carrying illegal drugs or endangered animals across their borders. Moving goods, animals or people illegally across a border, without declaring them, seeking permission, or deliberately evading official inspection constitutes smuggling.

In regions where smuggling, migration, and infiltration are a problem, many countries fortify borders with separation barriers and institute formal border control procedures. Some borders are only signposted. This is common in countries within the European Schengen Area and on rural sections of the Canada – United States border. Borders may even be completely unmarked, a common occurrence with remote or forested borders.

A photograph of the France-Italy border at night. The southwestern end of the Alps separates the two countries.

Some geographical features that often constitute natural borders are:

A maritime border is a division enclosing an area in the ocean where a nation has exclusive rights over the mineral and biological resources,[1] encompassing maritime features, limits and zones.[2] Maritime borders represent the jurisdictional borders of a maritime nation[3] and are recognized by the United Nations Convention on the Law of the Sea.

Maritime borders exist in the context of territorial waters, contiguous zones, and exclusive economic zones; however, the terminology does not encompass lake or river boundaries, which are considered within the context of land boundaries.

Some maritime borders have remained indeterminate despite efforts to clarify them. This is explained by an array of factors, some of which illustrate regional problems.[4]

The presence of borders often fosters certain economic features or anomalies. Wherever two jurisdictions come into contact, special economic opportunities arise for border trade. Smuggling provides a classic case; contrariwise, a border region may flourish on the provision of excise or of import–export services — legal or quasi-legal, corrupt or corruption-free. Different regulations on either side of a border may encourage services to position themselves at or near that border: thus the provision of pornography, of prostitution, of alcohol and/or of narcotics may cluster around borders, city limits, county lines, ports and airports. In a more planned and official context, Special Economic Zones (SEZs) often tend to cluster near borders or ports.

Even if the goods are not perceived to be undesirable, states will still seek to document and regulate the cross-border trade in order to collect tariffs and benefit from foreign currency exchange revenues.[5] Thus, there is the concept unofficial trade in goods otherwise legal; for example, the cross-border trade in livestock by pastoralists in the Horn of Africa. Ethiopia sells an estimated $250 to $300 million of livestock to Somalia, Kenya and Djibouti every year unofficially, over 100 times the official estimate.[5]

Human economic traffic across borders (apart from kidnapping), may involve mass commuting between workplaces and residential settlements. The removal of internal barriers to commerce, as in France after the French Revolution or in Europe since the 1940s, de-emphasises border-based economic activity and fosters free trade. Euroregions are similar official structures built around commuting across borders. 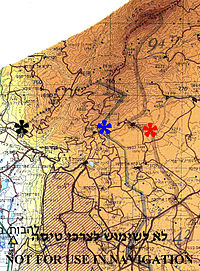 Political borders have a variety of meanings for those whom they affect. Many borders in the world have checkpoints where border control agents inspect those crossing the boundary.

In much of Europe, such controls were abolished by the Schengen Agreement and subsequent European Union legislation. Since the Treaty of Amsterdam, the competence to pass laws on crossing internal and external borders within the European Union and the associated Schengen States (Iceland, Norway, Switzerland, and Liechtenstein) lies exclusively within the jurisdiction of the European Union, except where states have used a specific right to opt-out (United Kingdom and Ireland, which maintain a common travel area amongst themselves). For details, see Schengen Area.

The United States has notably increased measures taken in border control on the Canada–United States border and the United States–Mexico border during its War on Terrorism (See Shantz 2010). One American writer has said that the 3,600 km (2,200 mi) US-Mexico border is probably "the world's longest boundary between a First World and Third World country."[6]

Historic borders such as the Great Wall of China, the Maginot Line, and Hadrian's Wall have played a great many roles and been marked in different ways. While the stone walls, the Great Wall of China and the Roman Hadrian's Wall in Britain had military functions, the entirety of the Roman borders were very porous, which encouraged Roman economic activity with neighbors.[7] On the other hand, a border like the Maginot Line was entirely military and was meant to prevent any access in what was to be World War II to France by its neighbor, Germany. Germany ended up going around the Maginot Line through Belgium just as it had done in World War I.

Macro-regional integration initiatives, such as the European Union and NAFTA, have spurred the establishment of cross-border regions. These are initiatives driven by local or regional authorities, aimed at dealing with local border-transcending problems such as transport and environmental degradation.[8] Many cross-border regions are also active in encouraging intercultural communication and dialogue as well as cross-border economic development strategies.
In Europe, the European Union provides financial support to cross-border regions via its Interreg programme. The Council of Europe has issued the Outline Convention on Transfrontier Co-operation, providing a legal framework for cross-border co-operation even though it is in practice rarely used by Euroregions.

There has been a renaissance in the study of borders during the past two decades, partially from creation of a counter narrative to notions of a borderless world that have been advanced as part of globalization theory.[9] Examples of recent initiatives are the Border Regions in Transition network of scholars,[10] the International Boundaries Research Unit at the University of Durham,[11] the Association of Borderlands Studies based in North America,[12] and the founding of smaller border research centres at Nijmegen[13] and Queen's University Belfast.[14]

The following pictures show in how many different ways international and regional borders can be closed off, monitored, at least marked as such, or simply unremarkable.