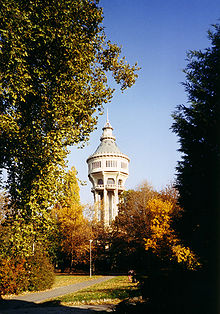 The Water Tower, a famous landmark on Margaret Island.

Margaret Island (Hungarian: Margit-sziget[1][2]) is a 2.5 km (1.6 mi) long island, 500 metres (550 yards) wide, (0.965 km² (225 acres) in area) in the middle of the Danube in central Budapest, Hungary. It belongs administratively to the 13th district. The island is mostly covered by landscape parks, and is a popular recreational area. Its medieval ruins are reminders of its importance in the Middle Ages as a religious centre. The island spans the area between the Margaret Bridge (south) and the Árpád Bridge (north).

The island was called Nyulak szigete (English: Island of the Rabbits) in the Middle Ages, and it received its current name after Saint Margaret (1242–1270), the daughter of Béla IV of Hungary who lived in the Dominican convent on the island. Other names of the island were Nagyboldogasszony-sziget, Úr-sziget, Budai-sziget, Dunai-sziget, Nádor-sziget, Palatinus-sziget during different periods of its history. (The names mean Island of Our Lady, Island of Nobles, Buda Island, Danube Island, Palatine Island.)

The island was dominated by nunneries, churches and cloisters until the 16th century. During the Ottoman wars the monks and nuns fled and the buildings were destroyed. In the 18th century it was chosen to be the resort of palatines. It was declared a public garden in 1908. 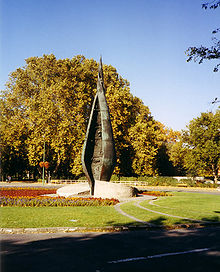 Since the 1980s, entry by cars has been limited; only a single bus line and taxis, alongside the service traffic of local stores and restaurants are allowed to enter. On the northern end of the island a car park houses the cars of hotel guests.

There is a rubber-coated jogging track going around the island (5350 meters, marked by every 500 meters).

The Music Fountain and the Water Tower are protected UNESCO sites.

The island houses various sports establishments, like the Palatinus water park (the largest open-air swimming complex in Budapest), the Alfréd Hajós sports pool (where the European LC Championships 1958, 2006 and 2010 took place), a tennis stadium and an athletics centre.

Two hotels provide accommodation: the fin de siècle Grand Hotel Margitsziget, and the modern Thermal Hotel Margitsziget with thermal spa and various medical services. There is also an open-air theatre accommodating an audience of 3500, and several clubs and restaurants. For exploration and pastime, four-person cycle cars or small electric cars can be rented for use on the area of the island.