People of Chinese descent, including mixed Chinese and other ethnic origin, make up about four percent of the Canadian population, or about 1.3 million people. Most of them are concentrated within the provinces of British Columbia and Ontario. The five metropolitan areas with the largest Chinese Canadian populations are the Greater Toronto Area (537,060), Metro Vancouver (402,000), Greater Montreal (83,000), Calgary Region (75,410), and the Edmonton Capital Region (53,670). 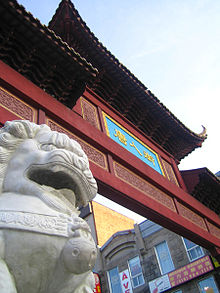 The gate to Montreal's Chinatown

The first record of Chinese in what is known as Canada today can be dated back to 1788. The renegade British Captain James Meares hired a group of roughly 70 Chinese carpenters from Macau and employed them to build a ship the North West America, at Nootka Sound, Vancouver Island, British Columbia, then an increasingly important European outpost on the Pacific coast. When the shipbuilding was done, Meares relocated the Chinese to San Blas, Mexico,

The first substantial wave of Chinese immigrants into the British colonies of Vancouver Island and British Columbia began in 1858 with the onset of the Fraser Canyon Gold Rush and a mass migration from the California gold fields. Most of these Chinese were "sojourners" in a sense, in that most of them planned on returning to their homeland after working in British North America for a period of time. Many came to British Columbia as common labourers and most were paid only in vouchers and mats of rice[2] so they were captives of the Chinese-owned firms that imported them. Gold rushes elsewhere in the British Columbia Interior also attracted a significant number of miners, many of them defectors from the railway camps, many of whom engaged in ranching and farming as well as mercantile pursuits. Chinese ranchers and farmers controlled large amounts of land in the BC Interior, and were the dominant ownership of the region's gold mines after the initial gold rushes waned. Chinese freight companies were also notable in all the gold rushes, as well as merchants of all kinds.

Many workers from Fujian and Guangdong Provinces arrived to help build the Canadian Pacific Railway in the 19th century as did Chinese veterans of the gold rushes. These workers accepted the terms offered by the Chinese labour contractors who were engaged by the railway construction company to hire them - low pay, long hours, lower wages than non-Chinese workers and dangerous working conditions, in order to support their families that stayed in China. Their willingness to endure hardship for low wages enraged fellow non-Chinese workers who thought they were unnecessarily complicating the labour market situations. From the passage of the Chinese Immigration Act in 1885, the Canadian government began to charge a substantial Head Tax for each Chinese person trying to immigrate to Canada. The Chinese were the only ethnic group that had to pay such a tax.

In 1923, the federal Liberal government of William Lyon Mackenzie King banned Chinese immigration with the passage of the Chinese Immigration Act of 1923, although numerous exemptions for businessmen, clergy, students and others did not end immigration entirely.[3] With this act, the Chinese received similar legal treatment to blacks before them who Canada also had specifically excluded from immigration on the basis of race. (This was formalised in 1911 by Prime Minister Sir Wilfrid Laurier who in Sub-section (c) of Section 38 of the Immigration Act called blacks "unsuitable" for Canada.) During the next 25 years, more and more laws against the Chinese were passed. Most jobs were closed to Chinese men and women,[citation needed]. Many Chinese opened their own restaurant and laundry businesses. In British Columbia, Saskatchewan and Ontario, Chinese employers were not allowed to hire white females, so most Chinese businesses became Chinese-only.[4]

Some of those Chinese Canadian workers settled in Canada after the railway was constructed. Most could not bring the rest of their families, including immediate relatives, due to government restrictions and enormous processing fees. They established Chinatowns and societies in undesirable sections of the cities, such as Dupont Street (now East Pender) in Vancouver, which had been the focus of the early city's red-light district until Chinese merchants took over the area from the 1890s onwards.

During the Great Depression, life was even tougher for the Chinese than it was for other Canadians.[citation needed] In Alberta, for example, Chinese-Canadians received relief payments of less than half the amount paid to other Canadians. And because The Chinese Exclusion Act prohibited any additional immigration from China, the Chinese men who had arrived earlier had to face these hardships alone, without the companionship of their wives and children.

Census data from 1931 shows that there were 1,240 men to every 100 women in Chinese-Canadian communities. To protest The Chinese Exclusion Act, Chinese-Canadians closed their businesses and boycotted Dominion Day celebrations every July 1, which became known as “Humiliation Day” by the Chinese-Canadians.[5] 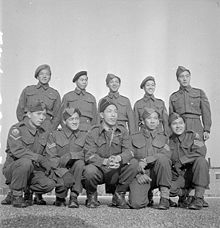 Canada was slow to lift the restrictions against the Chinese-Canadians and grant them full rights as Canadian citizens. Because Canada signed the United Nations' Charter of Human Rights at the conclusion of the Second World War, the Canadian government had to repeal the Chinese Exclusion Act, which contravened the UN Charter. The same year, 1947, Chinese-Canadians were finally granted the right to vote in federal elections. But it took another 20 years, until the points system was adopted for selecting immigrants, that the Chinese began to be admitted under the same criteria as any other applicants.

After many years of organized calls for an official Canadian government public apology and redress to the historic Head tax, the minority Conservative government of Stephen Harper announced as part of their pre-election campaign, an official apology. On June 22, 2006, Prime Minister Stephen Harper delivered a message of redress in the House of Commons, calling it a "grave injustice".

Some educated Chinese arrived in Canada during the war as refugees. Since the mid-20th century, most new Chinese Canadians come from university-educated families, one of whose most essential values is still quality education. These newcomers are a major part of the "Brain gain" the inverse of the infamous "Brain drain", i.e., Canadians leaving to the United States of America, of which Chinese have also been a part.

Chinese Indonesians and Chinese Malaysians first arrived in Canada in 1960s during anti-Chinese riots in their respective home countries. From 1970s – 1999, many more Indonesians and Malaysians of Chinese origin settled in Canada. Many Chinese from Vietnam, Laos and Kampuchea came to Canada as refugees in the aftermath of the Vietnam War.

Many Chinese from Latin America also came in large numbers, especially those from Nicaragua who fled from the dictatorial Somoza rule and following the 1972 earthquake. Chinese-Peruvians fled Peru for political reasons. They mostly settled in Canada's large cities.

From the late 1980s, an influx of Taiwanese people immigrated to Canada forming a group of Taiwanese Canadians. The settled in areas such as Vancouver, British Columbia and to the adjacent cities of Burnaby, Richmond and Coquitlam.

There was a significant influx of wealthy Chinese from Hong Kong in the early and mid-1990s before the handover of Hong Kong to the People's Republic of China (PRC). Canada was a preferred location, in part because investment visas were significantly easier to obtain than visas to the United States. Vancouver, Richmond and Toronto were the major destinations of these Chinese. During those years, immigrants from Hong Kong alone made up to 46% of all Chinese immigrants to Canada.[citation needed] After 1997, a significant portion of Chinese immigrants chose to move back to Hong Kong, some of a more permanent nature, after the dust of the handover was settled and fears of a "Communist takeover" turned out to be unnecessary.

In the 21st century, Chinese immigration from Hong Kong has dropped sharply and the largest source of Chinese immigration is from the mainland China.[6] A smaller number have arrived from Taiwan and very small numbers from Fiji, French Polynesia, and New Zealand.

The Chinese Canadian Population according to Statistics Canada in the 2006 census in the 10 Canadian Provinces and 3 territories:[8]

However, only about 790,500 people reported speaking a Chinese language at home on a regular basis, 81,900 fewer than those who reported having a Chinese mother tongue. This suggests some language loss has occurred, mainly among the Canadian-born who learned Chinese as a child, but who may not speak it regularly or do not use it as their main language at home. [7]

Compared with the general Canadian population, Chinese-Canadians tend to be better educated and earn more than Canadians as a whole.

For instance, in 2001, 40% of second-generation and 31% (overall for first and second generation) Chinese Canadians received a bachelor's degree compared with just 18% of the Canadian national average. Among second-generation Canadians between the ages of 20 and 29, 34% of Canadians of Chinese descent worked in high-skilled occupations (white collar professions those requiring a university degree).[22]

By 2002, the 2002 Ethnic Diversity Survey conducted by the University of Alberta, cited that 59.4% of Chinese Canadians completed a bachelor's degree.[23]

By 2006, StatCan reported that second-generation Chinese Canadians in the age 25-34 cohort had an university educational attainment rate of 62.4%.[24]

Today, English language education continues to play a major role in Chinese Canadian families, and the result has been an influx into many professions, including seeing a significant percentage of Chinese Canadians within engineering, the sciences, research, medicine, pharmacy, law and academia. The emphasis on education is a long-standing feature of Chinese life as a result of the Confucian tradition of learning and scholarship. The Chinese language is still considered a significant part of education, especially with the growing economic prominence of China. As a result, Chinese Canadians are better educated than the general Canadian population.[26]

The majority of Canadian-born Chinese during the 1970s and 1980s were descended from immigrants of Hong Kong and Southern China, and more recently from mainland Chinese immigrants.