The Chinese in Israel comprise a few separate groups. There are small groups of Jews from China who have made aliyah, as well as foreign students studying in Israeli universities, businessmen, merchants, and guest workers in construction.

Chinese who have made aliyah 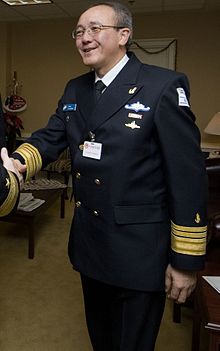 One early immigrant to Israel of Chinese background was the mother of Eli Marom; she was born to a Chinese man and a Russian émigré woman, and came to Israel in 1955, where she married Marom's father. Marom himself would go on to become Israel's first high-ranking military officer of Chinese descent when in 2007 he was appointed Aluf of the Israeli Navy.[1] Another early migrant was Sara Imas, a former Chinese citizen with a German Jewish father and Jiangsu mother, who was born and raised in China and lived through the Cultural Revolution. She came to Israel in 1991, but later returned to Shanghai as the representative of a diamond company after gaining Israeli citizenship and living in Israel for 12 years. [2]

In 2005, private organisation Shavei Israel began assisting Kaifeng's Jewish descendants to make aliyah, first bringing them to Israel and then preparing them to undertake Orthodox conversion to Judaism, in order to legally qualify to remain under the Law of Return. The first of the roughly 3,000 Jewish descendants in the city to arrive was Shlomo Jin.[3] Jin arrived in Israel in 2005 with his wife Dina and daughter Shalva. Most of Kaifeng's Jewish descendants are of patrilineal rather than matrilineal Jewish descent. As a result, Israeli religious courts have required them to undergo Orthodox conversions in order to be recognised as Jews.[4] Jin himself, who came on a tourist visa and overstayed, was almost deported before his right to remain was recognised. By 2011, Shavei Israel had taken 14 people from China through the process of immigration and conversion. Founder Michael Freund states that his organisation would like to bring more, but that complex Israeli bureaucratic and religious procedures form a barrier to this goal.[3]

In 2001, the number of Chinese workers in Israel has been estimated to be 23,000, of whom less than half are employed. Many are remaining in the country and working in violation of the terms of their visas.[5]

In 2001, there is evidence of Chinese workers paying as much as US$19,000 just for the opportunity to get a visa to Israel and work there. This is usually paid by illegal loans to which family members are guarantors. It has been estimated that about 70 percent of those payments go to Israeli manpower companies. Workers are promised wages as high as US$1500, but sometimes find their actual wages are as low as only US$200. The manpower companies also often retain the passports of workers, allegedly for safekeeping purposes, and force the workers to pay a fine to get their passports back.[6]

Chinese workers are in the worst situation of all the nationalities working in Israel since most of them are unable to speak Hebrew or English, have no community in the country to help them - as most of the other nationalities have - and are totally at the mercy of their employers. If something is wrong with their visa, if they have been brought to do a job that they are untrained for, or if they try to leave an employer who ignores their rights, they are immediately liable to be deported.

In many cases, Chinese workers are deported because of the misdeeds of their employer. An Israeli State Comptroller's report from 1998 highlighted the situation whereby if an employer did not pay the requisite fees, his workers would be arrested as a sanction. If the employer was caught moving the workers to a different place than specified by their visas, the workers would be arrested and deported.[7]

In 2001, then-labor and social affairs minister Shlomo Benizri said: "I just don't understand why a restaurant needs a slant-eye to serve me my meal." He was heavily rebuked for the comment[8]

Employers have also been known in isolated circumstances to impose humiliating restrictions on Chinese workers in their employment contracts. In 2003, a report by The Guardian stated that Chinese workers at an unspecified company had been required to agree not to have sex with or marry Israeli women, including prostitutes, as a condition of getting a job. Israeli lawyers, however, claim that these contracts violate Israeli law, and would under no circumstances be enforceable.[9]