Chinatown (Chinese: 多倫多華埠) is an ethnic enclave in Downtown Toronto, Ontario, Canada, with a high concentration of ethnic Chinese residents and businesses extending along Dundas Street West and Spadina Avenue. First developed in the late 19th century, it is now one of the largest Chinatowns in North America and one of several major Chinese-Canadian communities in the Greater Toronto Area. There are approximately six Chinatowns in Greater Toronto, including in the municipalities of Markham and Mississauga.[citation needed]

Toronto's Chinatown first appeared during the 1870s with the migration of American Chinese from California due to racial conflict and from the Eastern United States due to the depression at the time.[1] The earliest record of Toronto's Chinese community is traced to Sam Ching, who owned a hand laundry business on Adelaide Street in 1878.[2] Ching was the first Chinese person listed in the city's directory.[3]

Toronto's downtown Chinatown has two phases in its history since inception:

The first Chinatown of Toronto existed from the 1870s to 1961 along York Street and Elizabeth Street between Queen and Dundas street within Toronto's Ward district. Most of the space is now occupied by the new Toronto City Hall and its civil square, with only one third of this original Chinatown left south of Dundas.

Even with the strict limitations placed on Chinese immigration with the Chinese Immigration Act of 1885, the first Toronto Chinatown took shape into the early 1900s as hundreds of Chinese men settled close to Union Station after helping to build the Canadian Pacific Railway across Canada. The men originally found lodgings close to the railway station due to its convenience.[4]

By 1910, the Chinese population in Toronto numbered over a thousand. As in the rest of Canada and the US, due to entry resistance into other areas of employment the Chinese of Toronto had to resort to the labor of food service and washing laundry.[1] In this time, hundreds of Chinese-owned businesses had developed, consisting mainly of restaurants, grocery stores and hand laundries. The Chinese laundries competed with the other Torontonian laundries leading to publically called boycotts and demands for the city government to cancel or withhold business licenses from Chinese operators.[1] By the 1930s, Chinatown was a firmly established and well-defined community that extended along Bay Street between Dundas Street and Queen Street. Like the rest of the country, Chinatown suffered a severe downturn in the Great Depression, with the closing of more than 116 hand laundries and hundreds of other businesses.[5] The community began to recover after World War II as Canada's general economic fortunes improved. The Chinese population greatly increased between 1947 and 1960 to around as the wives and descendants of the Chinese men already in Canada immigrated to the city after the country's Chinese exclusion act began to be lifted in 1967.[1] In the following decades, students and skilled workers arrived from Hong Kong, Guangdong and Chinese communities in Southeast Asia and the West Indies further increased the Chinese population leading to the creating of communities towards cities in the east of Toronto.

When plans emerged in the late 1950s to construct the new Toronto City Hall at the intersection of Queen and Bay Streets, it became clear that most of Chinatown would be displaced by the project. As Chinese businesses began to relocate, some stores were taken over by other developers, and most stores that occupied the project site were cleared through expropriation. More than two-thirds of Elizabeth Street from Queen to Dundas Streets were destroyed. Construction on City Hall and Nathan Phillips Square began in 1961.

Due in part to the high land value in the area of Chinatown, city planners in 1967 proposed that the rest of the first Chinatown be demolished and the population moved for the development of office buildings north of City Hall. This endangered many more businesses, and even with the support of most Torontonians to save this part of Chinatown, the city was adamant to clear the buildings arguing that preserving Chinatown would turn it into a ghetto.[1] At this time, community leaders including Jean Lumb established the "Save Chinatown Committee", with Lumb acting as coordinator and face of the campaign. She later received the Order of Canada in 1976 for her role in helping to save Chinatown. In 1970 and again in 1975, the Toronto officials proposed to demolish the Dundas Street portions of Chinatown for the expansion of the street to six lanes, however due to community protests the proposals were quashed.[1] 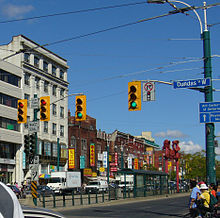 "Old" Chinatown at the intersection of Spadina and Dundas

The present day old Chinatown along Spadina was formerly a Jewish district. With the influx of Chinese immigration during the 1960s due to the lifting of Canada's racial exclusion policies, Chinese businesses expanded in this area.[1]

Following the demolition of first Chinatown, the existing first Chinatown community migrated westward to the neighborhood around Spadina Chinatown's current location centered bounded by Spadina Avenue, Dundas Street, College Street and University Avenue. A handful of Chinese businesses still remain around Bay and Dundas. Chinatown approximately covers a long, narrow stretch of area centred around Spadina Avenue from Oxford Street in the north to Phoebe Street in the south, with its epicentre at the intersection of Spadina Avenue and Dundas Street West. 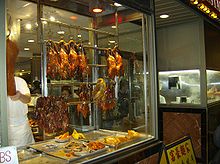 Toronto's Chinatown is one of the largest in North America. It is centred on the intersection of Dundas Street West and Spadina Avenue, and extends outward from this point along both streets. With the population changes of recent decades, it has come to reflect a diverse set of East Asian cultures through its shops and restaurants, including Chinese, Vietnamese, and Thai. The major Chinese malls in the area are Dragon City and Chinatown Centre.

Since the 1990s, Chinatown has been struggling to redefine itself in the face of an ageing Chinese population and the declining number of tourists visiting the enclave. As the ageing population shrank, revenues of businesses in the neighbourhood also decreased. While the majority of the grocery stores and shops remain, most of the once-famed restaurants on Dundas Street West, especially the barbecue shops located below grade, have closed since 2000.

Competition from commercial developments in suburban Chinese communities also drew wealth and professional immigrants away from downtown. Unlike those newer developments in the suburbs, Chinatown's economy relies heavily on tourism and Chinese seniors. As many younger, higher-income immigrants settled elsewhere in the city, those left in the district are typically from older generations who depend on downtown's dense concentration of services and accessibility to public transportation. Ethnic Chinese from Vietnam are now the faces of Toronto's old Chinatown and turning some parts into Little Saigon. Latin American immigrants are also moving into Toronto's old Chinatown.

In the 2000s, downtown neighbourhoods became more attractive to urban professionals and young people who work in the Financial District, leading to the gentrification of surrounding areas and potentially changing the face of old Chinatown.

Historically, Toronto's Chinatown has been represented by immigrants and families from southern China and Hong Kong. Since the transfer of Hong Kong's sovereignty to the People's Republic of China in 1997, immigrants from mainland China have greatly exceeded those from Hong Kong. However, at present Cantonese remains the primary language used by businesses and restaurants in Chinatown. The Chinese immigrant population now consists of distinct subgroups: while some Vietnamese Chinese, who generally arrived as impoverished refugees, continue to reside in old Chinatown, others now live in suburban Mississauga; the wealthy Hong Kong Chinese now tend to settle in Markham and Richmond Hill. Among new immigrants, those who settle in the historic Chinatown tend to be Mainland Chinese.

To the east of Spadina Avenue, numerous university students attending the University of Toronto, the Ontario College of Art and Design, and Ryerson University live in many of the small houses built as workers' housing. The area to the west has seen a surge in Latin American immigrants. The diversity brings a more multicultural flavour to the district, but may gradually reduce or eliminate its identity as Chinatown. 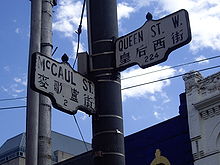 A number of streets in Chinatown are bilingual, a feature first introduced in the 1970s. The translations are mainly phonetic and use Chinese characters defined through Cantonese pronunciations.[citation needed] 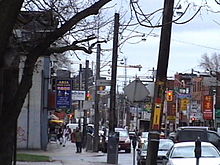 As property values increased in downtown Chinatown, many Chinese Canadians migrated to Toronto's east end in Riverdale. A second, somewhat smaller, Chinese community was formed, centred on Gerrard Street East between Broadview Avenue and Carlaw Avenue 43°40′00″N 79°20′50″W﻿ / ﻿43.6666144°N 79.3472958°W﻿ / 43.6666144; -79.3472958. Chinese-Vietnamese and mainland Chinese immigrants dominate this district. East Chinatown[citation needed] is somewhat smaller than Toronto's main Chinatown, but is growing. At the northernmost corner of East Chinatown (northwest corner, Broadview Avenue and Gerrard Street) is the Riverdale branch of the Toronto Public Library. This branch is bilingual in Chinese and English. East Chinatown can be accessed by the 504 King, the 505 Dundas, or the 506 Carlton Toronto Transit Commission (TTC) streetcars. Construction on the Toronto Chinese Archway began in the western end of East Chinatown on November 24, 2008 and it opened to the public on September 12, 2009.

The 1999 Chow Yun-fat film The Corruptor was set in the New York City Chinatown, with scenes filmed in the Chinatowns of New York and Toronto.

The television series Kung Fu: The Legend Continues was filmed in Chinatown at Spadina Avenue and Dundas Street West for many episodes of its 1993–97 run. Filmed in Toronto, it portrays the Chinatown of an unidentified major U.S. city.

Toronto's Chinatown is featured prominently in the 2008 collection of short stories The Chinese Knot and Other Stories by Lien Chao.

Toronto band Do Make Say Think have a song titled "Chinatown" on their 2002 album & Yet & Yet.