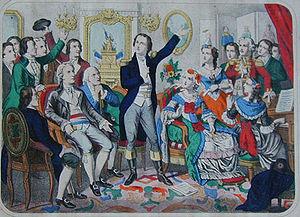 Rouget de Lisle, the composer of the French national anthem La Marseillaise, sings it for the first time. The anthem is the second-earliest to be adopted by a state, in 1795.

Most nations have anthems, defined as "a song, as of praise, devotion, or patriotism";[1] most anthems are either marches or hymns in style. A hymn can become a national anthem by a provision in the state's constitution, by a law enacted by its legislature, or simply by tradition.[2] A royal anthem is a patriotic song similar to a national anthem, but it specifically praises or prays for a monarch or royal dynasty. Such anthems are usually performed at public appearances by the monarch or during other events of royal importance. Some states use the royal anthem as the national anthem, such as the anthem of Jordan.[3]

There are multiple claimants to the position of oldest national anthem.[4] Among the national anthems, the first to be composed was the Dutch national anthem the Wilhelmus, which was written between 1568 and 1572.[5] The Japanese anthem, Kimi ga Yo, employs the oldest lyrics of any national anthem, taking its words from a Heian period (794–1185) poem, yet it was not set to music until 1880.[6] The first anthem to be officially adopted as such was the Spanish anthem Marcha Real, in 1770; its origins remain unclear, being suggested to have sixteenth century Venetian origins, or even to have been composed by king Frederick the Great himself; it is also one of the few national anthems that has never had official lyrics.[7] Anthems became increasingly popular among European states in the 18th century.[8] For example, the British national anthem God Save the Queen was first performed under the title God Save the King in 1745.[9] The French anthem La Marseillaise was written half a century later in 1792, and adopted in 1795.[10]

National anthems are usually written in the most common language of the state, whether de facto or official. For example, India's anthem Jana Gana Mana is written in a Sanskritized version of Bengali, which are both official languages of India.[11] States with multiple national languages may offer several versions of their anthem. For instance, Switzerland's national anthem has different lyrics for each of the country's four official languages: French, German, Italian, and Romansh.[12] The New Zealand national anthem is traditionally sung with the first verse in Māori (Aotearoa) and the second in English (God Defend New Zealand). The tune is the same but the lyrics have different meanings. South Africa's national anthem is unique in that five of the eleven official languages are used in the same anthem, in which each language comprises a stanza.[13]

Only United Nations member states are included in this table.[14] Anthems of sovereign states which are not UN members are listed in a separate table below. An English translation of the title is provided in brackets where appropriate.

Anthems of other states

This table includes anthems of de facto sovereign states which are not members of the United Nations. Many of them have received little or no recognition from the international community; some are widely considered to be part of one of the countries listed above.

Instrumental performance of the Russian national anthem at the 2010 Moscow Victory Day Parade in Moscow's Red Square, resplendent with a 21 gun salute