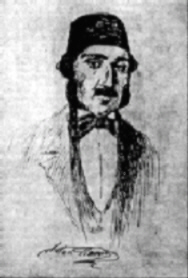 Anton Pann (born Antonie Pantoleon-Petroveanu, and also mentioned as "Anton Pantoleon" or "Petrovici"; 1790s&mdash;, ), was an Ottoman-born n composer, musicologist, and Romanian-language poet, also noted for his activities as a printer, translator, and schoolteacher. Pann was an influential folklorist and collector of s, as well as a and textbook author.

After he began primary education at the communal school in Sliven, the Petrovs fled the region during the Russo-Turkish War of 1806-1812 and settled in , , where Anton was first employed by a Russian Orthodox choir. His two brothers were killed in the skirmishes around , as volunteers on the Imperial Russian side. Moving with his mother to in 1810-1812, Pann would spend most of his life in the city.

Anton Pann carried on with his choral activities in Wallachia, was employed as a sexton by the Romanian Orthodox Olari and Sfinţilor Churches, before being tutored by and allowed to attend the religious music school founded by (1816). Perfecting his craft, he came to the attention of Metropolitan , who appointed him on a commission charged with translating liturgical works from Slavonic to Romanian. The memoirist later recounted that Pann attended the , but this remains disputed. In 1820, he first got married to a woman named Zamfira Azgurean, in what was to be the first of his unhappy romantic liaisons.

In 1821, when 's rebellious forces occupied the city, Pann fled to the n city of Kronstadt (part of the ), and was employed as a cantor by the Saint Nicolas Church in the ethnic Romanian neighborhood of Şchei. This temporary refuge over the mirrored that of other cultural and religious figures of the day, his fellow musician among them.

He also spent time in (1827), where he was a teacher at the Orthodox and, in parallel, lectured on religious music to the nuns of the . A scandal erupted after Pann used his position at the latter institution to seduce Anica, the mother superior's 16-year-old niece. Unsuccessfully offering her legal guardians to marry Anica in church, he eloped with her back to Şchei. While there, he became friends with the writer , whom he had probably met earlier, and who, according to Pann's own testimony, gave him lessons in meter. According to some sources, he also took a trip to . The literary critic attributes to Barac and , whose work constituted an adaption of various "" themes, the merit of having inspired Pann to pursue a literary career.

Returning to in 1828, he was officially expelled from his teaching position, and, in 1828, he returned to work as a cantor for the Bucharest school on Podul Mogoşoaiei. Over the following decade, Pann authored a large panel of musical and literary works, including "Noul Doxastar", which, adapted and partly recreated from Dionisie Fotino's version, assembled all officially-endorsed pieces of , and which he prefaced. According to his own testimony, this had required a major financial effort, one which almost caused his bankruptcy.

In 1837, he separated from Anica, with whom he had fathered a son (Gheorghiţă) and a daughter (Tinca). Anton Pann married a third and final time in 1840, to Catinca (the more common name of Ecaterina). All three of his wives survived his death; his son by Zamfira, Lazăr, was to become an Orthodox priest.

From 1842 to 1851, with support gained from Metropolitan , Pann was employed as a music teacher by the main seminary in Bucharest (in parallel, he continued to sing at the Albă Church). During those years, he began associating with famous "" of his day, and regularly attended the lively social gatherings held in the gardens and orchards of . A passionate collector of classical-Ottoman and , which formed the staple of the "lăutari" repertory ever since the Phanariote period, Pann later printed some of the earliest "" s.

In 1843, Pann established a inside the , which published works by several authors of his day, as well as a long series of s. He later confessed that this enterprise had drained his economies, and that he had relied on support from various benefactors. Upon Neofit's request, he also began the translation of various religious texts. Pann's comprehensive and innovative textbook for music, "Bazul teoretic şi practic al muzicii bisericeşti", was officially endorsed by the Metropolitan and taught at the seminary after 1845 and became a template for similar works; in addition, his printing shop sold cheap copies of popular novels, such as the "", the "Book of 1001 Nights", the "Book of Til Owl-Mirror", and the "Story of Genevieve of Brabant". In March 1847, Anton Pann authored an account of the major fire in the capital ("see "). During the latter disaster, his printing shop was heavily damaged, and he was only able to salvage the presses. He resumed his activities only in 1849, when he moved the business to a house owned by Catinca Pann on Taurului Street.

In 1848, he published a of words and expressions in Romanian, Russian and Ottoman Turkish. Later in the same year, Pann sided with the liberal revolutionaries in their action against Prince , was a supporter of the new Wallachian Provisional Government, participating in popular rallies in and ("see "). The following year, after falling severely ill, he wrote down the first version of his testament in verse ("Adiata"), in which he asked to be buried in (where he hoped that his wife Catinca would become a nun). After a series of other satirical works, Pann produced a collection of writings centered on the figure of Nastratin Hogea and owing inspiration to Balkan folklore at large (first published in 1853).

In autumn 1854, Pann fell ill with and the during a visit to Râmnicu Vâlcea, dying soon after at his Bucharest residence; he was buried in the of Bucharest, although, in his second will of August, he had asked for his final resting place to be the hermitage of Rozioara (this failure to comply was attributed to the difficulties in transportation). Catinca Pann remarried soon after this. During the early 1900s, Lucaci Church became home to a monument in Pann's honor, donated by the General Association of Church Singers &mdash; an institution presided over by .

Pann's literary creation was noted for its reliance on a vast , which he claimed to have codified, thus drawing comparisons to his predecessors , , and . The Romanian literary critic drew a direct comparison between Pann and his contemporary, the Wallachian Jewish peddler , who, without producing any written works, was made famous by a series of bitter puns in which he referred to himself in the third person (such as "For a few years now, Cilibi Moise has been begging Poverty to leave his house, at the very least for as long as it takes him to get dressed").

Together with and , Pann was among the first major interpreters of Romanian folklore in 19th century literature. Appealing primarily to a semi-educated audience, his creations have been celebrated for their familiar tone and use of plain Romanian, during a period when literary language was beginning to rely on formalism and a large number of s. The writer himself made frequent excuses to the more educated of his readers for any flaws they were to find in his texts, specifying that he lacked in formal training. In the final decades of his life, several of his printed works, especially "Memorialul focului mare" and the "" lyrics collection "Spitalul amorului", came to be appreciated by a younger generation of s. The n poet noted, in an 1872 letter quoted by : "Anton Pann has not yet been appreciated to his full value, and moreover, in Wallachia his merits are even being held in contempt by most modern men of letters". [ro icon , [http://ro.wikisource.org/wiki/Spiritul_critic_%C3%AEn_cultura_rom%C3%A2neasc%C4%83:Veacul_al_XIX-lea._Factorii_culturii_rom%C3%A2ne%C5%9Fti_din_acest_veac "Spiritul critic în cultura românească: Veacul al XIX-lea. Factorii culturii româneşti din acest veac"] (wikisource)]

Almost all of Pann's work drew on recent or ancient sources, which he reinterpreted to suit the tastes of his public. In the 1880s, the scholar revealed that one of Pann's major works, "Înţeleptul Archir şi nepotul său Anadam" ("The Wise Archir and His Nephew Anadam"), made ingenious use of an old and much-circulated biography of . In researching various s which Pann had used to expand on his proverbs, Gaster noted that they echoed obscure medieval material (including the "", 's "Le sottilissime astutie di Bertoldo", and even n Turkic folklore). One of his main pieces, the fable of the mouse who pictures himself king of all animals, originated with the "". indicated that, in writing his book on morals ("Hristoitia"), Pann integrated text from ' "".

As an original element, Anton Pann used the diverse sources of his work to compliment his own view of the world; according to Vianu, the latter's main traits were Pann's religious tolerance and fervor, as well as his ine outlook on social matters. Călinescu defined "Povestea vorbei" as "a false collection of folklore, given that Pann does not abide by peasant authenticity, but embellishes popular language with the cultured one, often obtaining an amazing chromatic effect". While commenting on Pann's focus on social developments of his time as "the completely mechanical ease with which current issues are put into verse", Călinescu noted that "Hristoitia" contained "advices which presume a state of supreme animality". In drawing the latter conclusion, he cited a in which Pann asked people not to touch their genitalia in public.

"O şezătoare la ţară", believed to be one of Pann's most accomplished works, is written as an epic in verse, and constitutes a satire of life in mid-19th century Wallachia. Reflecting the perspective of simple folk, the poem is marked by sarcastic remarks on social contrasts, , , as well as tensions between estate lessors and workers (with the former stereotypically depicted as Greeks). Its final part, a denouement, went unpublished. "O şezătoare la ţară" was also noted for the lengthy and meticulously detailed conclusions to each story, which evidenced a style borrowed from traditional storytelling. Vianu argued that the poem stands as a Romanian equivalent to "", "", or "". The text itself later became a source for aphorisms: the colloquial expression "ba e tunsă, ba e rasă" ("it is either trimmed or razed"), which Pann originally made in reference to an irrelevant debate over the state of an orchard, has survived as a tongue-in-cheek view of arbitrary conclusions.

Pann's influential taste for "manele" and their sentimental lyrics, as exemplified in his "Spitalul amorului" and other printed brochures, has been the target of criticism ever since the early 20th century. Tudor Vianu stressed that these works showed the influence of "the trivial popular music of his day", while Călinescu dismissed them as "lamented vulgarity and eroticism".

Pann is generally believed to have authored the music to "", 's . His associate is known to have arranged the melody to the lyrics of ,

, one of Romania's most influential poets, made a reference to Pann in his poem "Epigonii" (1870), which, in its opening verses, traces the development of early literature and the impact of . Cited alongside , , , , , , and others, Pann is referred to as the son of , the witty hero of folk literature, and complimented with the words "as clever as a proverb". [ro icon , [http://ro.wikisource.org/wiki/Epigonii "Epigonii"] (wikisource)] During the , the works of Anton Pann were reflected and complimented in the modernist poetic art of .

In 1945, authored a three-act play named "Anton Pann", centered on the poet's Şchei period. A museum of the life and activity of Anton Pann exist in , and, since 1990, a public theater in the same city bears his name.