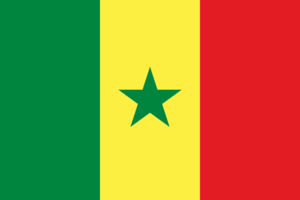 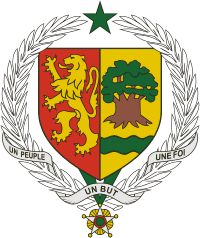 Senegal ( _fr. le Sénégal), officially the Republic of Senegal, is a country south of the in western Africa. Senegal is bounded by the to the west, to the north, to the east, and and to the south. lies almost entirely within Senegal, surrounded on the north, east and south; from its western coast, Gambia's territory follows the more than 300 kilometres (186 miles) inland. is the of Senegal, located on the Cape Verde Peninsula on the country's Atlantic coast.

Archaeological findings throughout the area indicate that Senegal was inhabited in prehistoric times.

Eastern Senegal was once part of the . It was founded by the in the middle valley of the . , the dominant religion in Senegal, first came to the region in the 11th century. In the 13th and 14th centuries, the area came under the influence of the empires to the east; the of Senegal also was founded during this time.

Various an powers&mdash;, the , and &mdash;competed for trade in the area from the 15th century onward, until in 1677, ended up in possession of what had become an important departure point&mdash;the infamous island of next to modern Dakar. Millions of West African people were shipped from here. It was only in the 1850s that the French began to expand their foothold onto the Senegalese mainland, at the expense of native kingdoms such as , , , and Jolof.

In January 1959 Senegal and the merged to form the , which became fully independent on 20 June 1960, as a result of the independence and the transfer of power agreement signed with France on 4 April 1960. Due to internal political difficulties, the Federation broke up on August 20. Senegal and Sudan (renamed the Republic of ) proclaimed independence. was elected Senegal's first president in September 1960.

Later after the breakup of the Mali Federation, President Senghor and Prime Minister governed together under a parliamentary system. In December 1962 their political rivalry led to an attempted coup by Prime Minister Dia. Although this was put down without bloodshed, Dia was arrested and imprisoned, and Senegal adopted a new constitution that consolidated the president's power. In 1980 President Senghor decided to retire from politics, and he handed power over in 1981 to his handpicked successor, .

Senegal joined with to form the nominal confederation of Senegambia on 1 February 1982. However, the union was dissolved in 1989. Despite peace talks, a southern separatist group in the region has clashed sporadically with government forces since 1982. Senegal has a long history of participating in international peacekeeping. [ [https://www.cia.gov/library/publications/the-world-factbook/geos/sg.html] CIA World factbook.]

Abdou Diouf was president between 1981 and 2000. He encouraged broader political participation, reduced government involvement in the economy, and widened Senegal's diplomatic engagements, particularly with other developing nations. Domestic politics on occasion spilled over into street violence, border tensions, and a violent separatist movement in the southern region of the . Nevertheless, Senegal's commitment to democracy and human rights strengthened. Diouf served four terms as president.

In the presidential election of 2000, opposition leader defeated Diouf in an election deemed free and fair by international observers. Senegal experienced its second peaceful transition of power, and its first from one political party to another. On 30 December 2004 President announced that he would sign a peace treaty with the separatist group in the region. This, however, has yet to be implemented. There was a round of talks in 2005, but the results did not yet yield a resolution.

Senegal is a republic with a powerful presidency; the president is elected every seven years, amended in 2001 to every five years, by universal adult . The current president is , re-elected in March 2007. Senegal has more than 80 political parties. The parliament consists of the National Assembly, which has 120 seats, and the Senate, which has 100 seats and was reinstituted in 2007. [The World Factbook, United States Central Intelligence Agency, accessed Sept. 17, 2008. https://www.cia.gov/library/publications/the-world-factbook/geos/sg.html] An independent judiciary also exists in Senegal. The nation's highest courts that deal with business issues are the constitutional council and the court of justice, members of which are named by the president.

Currently Senegal has a democratic political culture, being one of the more successful democratic transitions in Africa. Local administrators are appointed by, and responsible to, the president. The , religious leaders of the various Senegalese Muslim brotherhoods, also exercise a strong political influence in the country, most notably the leader of the brotherhood, .

Senegal is located on the west of the African continent. The Senegalese landscape consists mainly of the rolling sandy plains of the western which rise to foothills in the southeast. Here is also found Senegal's highest point, an otherwise unnamed feature near at 584 m (1926 ft). The northern border is formed by the , other rivers include the Gambia and s. The capital Dakar lies on the peninsula, the westernmost point of continental Africa.

The local is tropical with well-defined dry and humid seasons that result from northeast winter winds and southwest summer winds. Dakar's annual of about 600 mm (24 in) occurs between June and October when maximum temperatures average 27 °C (81 °F); December to February minimum temperatures are about 17 °C (63°F). Interior temperatures can be substantially higher than along the coast, and rainfall increases substantially farther south, exceeding 1.5 m (59.1 in) annually in some areas. The far interior of the country, in the region of Tambacounda, particularly on the border or Mali, temperatures can reach as high as 54 °C (130 °F).

The islands lie some km to mi|560 off the Senegalese , but ("Cape Green") is a maritime placemark, set at the foot of "Les Mammelles" , a convert|105|m|ft|0|sing=on cliff resting at one end of the peninsula onto which is settled Senegal's capital Dakar, and convert|1|km|yd|-2 south of the "Pointe des Almadies", the western-most point in Africa.

Regional capitals have the same name as their respective regions:

In January 1994 Senegal undertook a bold and ambitious economic reform program with the support of the international donor community. This reform began with a 50 percent devaluation of Senegal's currency, the CFA franc, which was linked at a fixed rate to the former and now to the . Government price controls and subsidies have been steadily dismantled. After seeing its economy retract by 2.1 percent in 1993, Senegal made an important turnaround, thanks to the reform program, with real growth in GDP averaging 5 percent annually during the years 1995–2001. Annual was reduced to less than 1 percent, but rose again to an estimated 3.3 percent in 2001. Investment increased steadily from 13.8 percent of GDP in 1993 to 16.5 percent in 1997.

As a member of the (WAEMU), Senegal is working toward greater regional integration with a unified external . Senegal also realized full connectivity in 1996, creating a mini-boom in -based services. Private activity now accounts for 82 percent of GDP. On the negative side, Senegal faces deep-seated urban problems of chronic , socioeconomic disparity, , and .

In recent years non-governmental organizations have played a significant role in economic and social development in Senegal. Fatou Sarr (in Development, Volume 49, Number 2, June 2006 , pp. 108-115; Palgrave Macmillan) cites as issues, a lack of a stable financial base for some NGOs and vulnerability to manipulation by authorities and donor agencies as ongoing NGO issues in Senegal. Some NGOs, such as USA-based TOSTAN focus their programs on sanitation, education and women's health issues. Others, such as AASED D'Assistance aux Enfant, focus on children. See the external link below: Africa Phonebooks-Senegal NGOs for a list of active NGOs in Senegal.

Senegal has a population of over 11 million, about 70 percent of whom live in rural areas. Density in these areas varies from about PD km2 to mi2|77|precision=0|spell=UK in the west-central region to PD km2 to mi2|2|precision=0|spell=UK in the arid eastern section. According to the "World Refugee Survey 2008", published by the U.S. Committee for Refugees and Immigrants, Senegal has a population of and asylum seekers numbering approximately 23,800 in 2007. The majority of this population (20,200) is from . Refugees live in , , and small settlements along the valley.

Senegal has a wide variety of ethnic groups and, as in most West African countries, several languages are widely spoken. The Wolof are the largest single ethnic group in Senegal at 43 percent; the and (also known as Halpulaar, Fulbe or Fula) (24 percent) are the second biggest group, followed by others that include the (15 percent), (10 percent), Jola (4 percent), Mandinka (3 percent), or , , and many smaller communities (9 percent). (See also the ethnic group.) About 50,000 ans (1 percent) (mostly French) as well as smaller numbers of and Lebanese reside in Senegal, mainly in the cities. Also located primarily in urban settings are the minority Vietnamese communities. From the time of earliest contact between Europeans and Africans along the coast of Senegal, particularly after the establishment of coastal trading posts during the fifteenth century, communities of mixed African and European (mostly French and Portuguese) origin have thrived. ans living in urban areas and in the region represent another recognized community of mixed African and European background. French is the official language, used regularly by a minority of Senegalese educated in a system styled upon the colonial-era schools of French origin (Koranic schools are even more popular, but Arabic is not widely spoken outside of this context of recitation). Most people also speak their own ethnic language while, especially in Dakar, is the . Pulaar is spoken by the Peuls and Toucouleur. is a prominent minority language in , regional capital of the , where some residents speak , primarily spoken in . Cape Verdeans speak their native creole, , and standard Portuguese.

Islamic communities are generally organized around one of several Islamic orders or brotherhoods, headed by a "" ("xaliifa" in Wolof, from Arabic "khalīfa"), who is usually a direct descendant of the group’s founder. The two largest and most prominent Sufi orders in Senegal are the , whose largest sub-groups are based in the cities of and , and the Murīdiyya (Murid), based in the city of Touba. The , a widespread ethnic group found along the Sahel from Chad to Senegal, representing 20 percent of the Senegalese population, were the first to be converted to Islam. The Halpulaar, composed of various groups, named "Peuls" and "s" in Senegal. Many of the "Toucouleurs", or sedentary Halpulaar of the Senegal River Valley in the north, converted to Islam around a millennium ago and later contributed to Islam's propagation throughout Senegal. Most communities south of the Senegal River Valley, however, were not thoroughly Islamized until the nineteenth and early twentieth centuries. During the mid-19th century, Islam became a banner of resistance against the traditional aristocracies and French colonialism, and Tijānī leaders and established short-lived but influential Islamic states but were both killed in battle and their territories then annexed by the French.

The spread of formal Quranic school (called "daara" in Wolof) during the colonial period increased largely through the effort of the Tijaniyya. In Murid communities, which place more emphasis on the work ethic than on literary Quranic studies, the term "daara" often applies to work groups devoted to working for a religious leader. Other Islamic groups include the much older Qādiriyya order and the Senegalese Laayeen order, which is prominent among the coastal Lebu. Today, most Senegalese children study at "daara"s for several years, memorizing as much of the Qur'an as they can. Some of them continue their religious studies at informal Arabic schools ("majlis") or at the growing number of private Arabic schools and publicly funded Franco-Arabic schools.

Small Roman Catholic communities are mainly found in coastal , Jola, Mankanya and populations, and in eastern Senegal among the and . The Protestant churches are mainly attended by immigrants but during the second half of the twentieth century Protestant churches led by Senegales leaders from different ethnical groups have evolved. In Dakar Catholic and Protestant rites are practiced by , the Lebanese, Capeverdian, European, and American immigrant population, and among certain Africans of other countries as well as by the Senegalese themselves. Although Islam is Senegal's majority religion, Senegal's first president, , was a Catholic Serer.

Senegal's al heritage is better known than that of most African countries, due to the popularity of , which is a form of Wolof percussive music; it has been popularized by . drumming is especially popular.