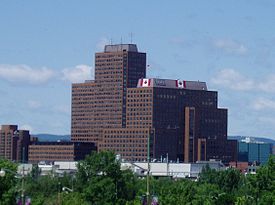 Terrasses de la Chaudière, home of the head office of the Department of Canadian Heritage

The current Minister of Canadian Heritage is the Honourable James Moore.

The department's headquarters are in the Jules Léger Building (South) (Édifice Jules Léger (Sud)) in Terrasses de la Chaudière, Gatineau, Quebec,[1] across the Ottawa River from the Canadian capital of Ottawa.