This is a list of the countries categorised by system of government. 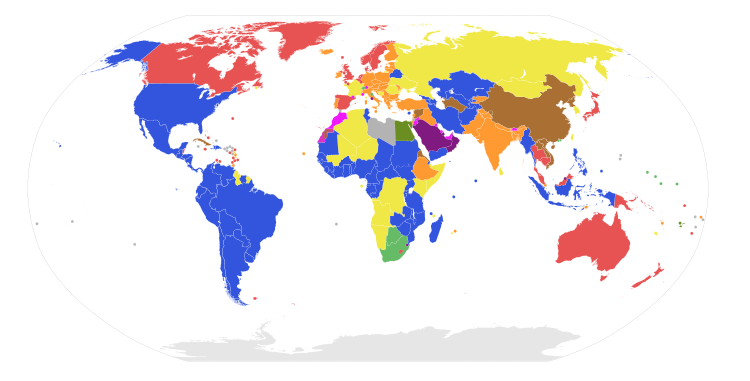 Note that this chart aims to represent de jure systems of government, not the de facto degree of democracy. Several states constitutionally deemed to be multiparty republics may also be broadly described as authoritarian states.

These are systems in which a president is the active head of the executive branch of government and is elected and remains in office independently of the legislature. The following list includes democratic and non-democratic states:

In full presidential systems, the president is both head of state and head of government. There is generally no prime minister, although if one exists he or she serves purely at the pleasure of the president.

Presidential systems without a prime minister

Presidential systems with a prime minister

The directorial system is the collective version of the presidential system. In a directorial republic a council jointly exercises both presidential and governmental powers. The council is appointed by the parliament (and democratically elected at local level), but it is not subject to political confidence during its term which has a fixed duration.

A parliamentary republic is a system in which a prime minister is the active head of the executive branch of government and also leader of the legislature. The president's degree of executive power may range from being reasonably significant (e.g. Pakistan) to little or none at all (e.g. Ireland). Where the president holds little executive power, his or her function is primarily that of a symbolic figurehead.

A combined head of state and government is elected by the legislature, however they are not subject to parliamentary confidence during their term (although their cabinet is).

These are systems in which the head of state is a constitutional monarch; the existence of their office and their ability to exercise their authority is established and restrained or held back by constitutional law.

Systems in which a prime minister is the active head of the executive branch of government. In some cases the prime minister is also leader of the legislature, in other cases the executive branch is clearly separated from legislature although the entire cabinet or individual ministers must step down in the case of a vote of no confidence.[8][9][dubious – discuss] The head of state is a constitutional monarch who only exercises his or her powers with the consent of the government, the people or their representatives.

The prime minister is the nation's active executive but the monarch still has considerable political powers that can be used at their own discretion.

Specifically, monarchies in which the monarch's exercise of power is unconstrained by any substantive constitutional law.

States based on a state religion where the head of state is selected by some form of religious hierarchy.

States in which political power is by law concentrated within a single political party whose operations are largely fused with the government hierarchy (as opposed to states where the law establishes a multi-party system but this fusion is not achieved anyway through electoral fraud or simple inertia). However, some do have elected governments.

The nation's military control the organs of government and all high-ranking political executives are also members of the military hierarchy.

States which have a system of government which is in transition or turmoil and are classified with the current direction of change.

States in which the central government has delegated some of its powers to regional authorities.

The exact political character of the European Union is widely debated, some arguing that it is sui generis (unique), but others arguing that it has features of a federation or a confederation. It has elements of intergovernmentalism, with the European Council acting as its collective "president", and also elements of supranationalism, with the European Commission acting as its executive and bureaucracy.[14] But it is not easily placed in any of the above categories.