Operation Strikeback was a major naval exercise of the North Atlantic Treaty Organization (NATO) that took place over a ten-day period in September 1957.

As part of a series of exercises to simulate an all-out Soviet attack on NATO, Operation Strikeback was tasked with two objectives. Its initial objective was the deployment of NATO's naval forces (designated the "Blue Fleet") against other NATO forces attempting to simulate an "enemy" navy that featured a large number of submarines (designated the "Orange Fleet"). Its other objective was to have the Blue Fleet execute carrier-based air strikes against "enemy" formations and emplacements along NATO's northern flank in Norway.

Operation Strikeback and the other concurrent NATO exercises held during the fall of 1957 would be the most ambitious military undertaking for the alliance to date, involving more than 250,000 men, 300 ships, and 1,500 aircraft operating from Norway to Turkey.[2][3]

Faced with the overwhelming numerical superiority of Soviet Union and Warsaw Pact military forces, NATO embraced the concept of the nuclear umbrella to protect Western Europe from a Soviet ground invasion.[4][5][6][7] This strategy was initially articulated in January 1954 by U.S. Army General and then-Supreme Allied Commander Europe Alfred Gruenther:

We have... an air-ground shield which, although still not strong enough, would force an enemy to concentrate prior to attack. In doing so, the concentrating force would be extremely vulnerable to losses from atomic weapon attacks... We can now use atomic weapons against an aggressor, delivered not only by long-range aircraft, but also by the use of shorter range planes, and by 280 mm. artillery... This air-ground team constitutes a very effective shield, and it would fight very well in case of attack.[6]

This strategic concept reflected the American strategy of massive retaliation of the Eisenhower administration as set forth by Secretary of State John Foster Dulles:

We need allies and collective security. Our purpose is to make these relations more effective, less costly. This can be done by placing more reliance on deterrent power and less dependence on local defensive power... Local defense will always be important. But there is no local defense which alone will contain the mighty landpower of the Communist world. Local defenses must be reinforced by the further deterrent of massive retaliatory power. A potential aggressor must know that he cannot always prescribe battle conditions that suit him.[8]

With the establishment of NATO’s Allied Command Atlantic (ACLANT) on 30 January 1952, the Supreme Allied Commander Atlantic (SACLANT) joined the previously-created Supreme Allied Commander Europe (SACEUR) as one of the alliance’s two principal military field commanders.[9] Also, a Channel Command was established on 21 February 1952 to control the English Channel and North Sea area and deny it to the enemy, protect the sea lanes of communication, and Support operations conducted by SACEUR and SACLANT.[10][11] The following key NATO military commands were involved in a series of alliance-wide exercises, including Operation Strikeback, during the Fall of 1957.[12][13]

As part of the response to a theoretical Soviet attack against NATO on all fronts, Operation Strikeback would test the capabilities of Allied naval forces (Blue Fleet) by tasking them to destroy the enemy navy (Orange Fleet) and its huge submarine fleet, protect transatlantic shipping, and undertake sustained carrier-based air strikes against the enemy positions.[14]

Beginning on 3 September 1957, American and Canadian naval forces got underway to join British, French, Dutch, and Norwegian naval forces in eastern Atlantic and northern European waters under the overall command of Vice Admiral Robert B. Pirie, United States Navy, the Commander of the U.S. Second Fleet, acting as NATO's Commander Striking Fleet Atlantic (COMSTRIKFLTLANT).[15] While en route, the U.S.-Canadian naval forces executed Operation Seaspray, a bilateral naval exercise to protect Blue Fleet’s vitally-important underway replenishment group (URG) from enemy submarine attacks.[16] The nuclear submarine Nautilus and the conventional submarine Trigger completed operations in the Arctic and joined 34 other U.S. and allied submarines temporarily assigned to the Orange Fleet.[17] USS Mount McKinley was based in Portsmouth Naval Base as the command communications base for the Orange forces controlling Comsuborangelant/Comphiborangelant for the duration of the Exercise.

Operating above the Arctic Circle in the Norwegian Sea, the Blue Fleet, which included the new U.S. supercarriers Saratoga and Forrestal, launched carried-based air strikes against enemy positions in Norway. Time magazine provided the following contemporary coverage of Operation Strikeback:

From somewhere southeast of Greenland came the crackle of an urgent radio message: "Being fired on by Orange surface raider. Inchcliffe Castle."[20] With that alert from a famed but fictitious merchant vessel, simulated hell broke loose in the North Atlantic. Out to punish the "aggressors," a six-nation Blue fleet totaling nearly 160 fighting ships began steaming toward Norway. In the Iceland-Faeroes gap, 36 Orange submarines, including the atom-powered Nautilus, lay in wait. The U.S. destroyer Charles R. Ware was "sunk"; a "torpedo" slowed down the carrier U.S.S. Intrepid, and H.M.S. Ark Royal had a hot time beating off the assaults of Britain-based Valiant jet bombers. But by early afternoon, Blue carrier planes got through to make dummy atom attacks on Norway's ports, bridges and airfields. Into the midst of this earnest make-believe strayed a Russian trawler - a real one. The Russian, being overtaken, had the right of way and held it, passing diagonally through the entire NATO fleet as the big ships refueled and moved beyond her.[21] 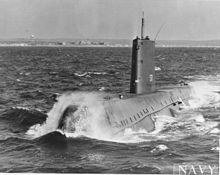 I am not in a position to criticize political decisions, but I say this as a professional man with over 40 years' experience — I cannot carry out my task as given to me at the moment without more forces. In recent years the submarine has, without any doubt at all, gone a very long way ahead of the devices with which we are presently equipped to sound and destroy it.[24]

Particularly significant was the performance of nuclear-powered submarines with the U.S. Navy's first two such vessels, the USS Nautilus (SSN-571) and USS Seawolf (SSN-575), participating in Operation Strikeback. According to naval analyst-historian Norman Friedman, Nautilus "presented a greater threat than all 21 snorkel submarines combined" during Operation Strikeback, making 16 successful attacks against various naval formations while maintaining effective on-station tactical and high-speed pursuit capabilities. Nautilus cruised 3,384 nautical miles (6,267 km) with an average speed of 14.4 knots (26.7 km/h).[25] In addition to the Nautilus, the Seawolf departed New London on 3 September for Operation Strikeback. Before she surfaced off Newport, Rhode Isand, on 25 September, Seawolf had remained submerged for 16 days, cruising a total of 6,331 miles (10,189 km). Recognizing the need to meet this Anti-submarine warfare (ASW) challenge, the following actions were taken:

Operation Strikeback was the final deployment for the battleships Iowa and Wisconsin until their re-activation in the 1980s by the Reagan Administration. Finally, on the technical level, Operation Strikeback saw the first use of single sideband (SSB) voice communications for tactical operations by the United States Navy,[31] and HMS Bulwark was the first Royal Navy carrier to use a magnetic loop communication system.[32]

The following is a partial listing of naval forces known to have participated in Operation Strikeback.[33]

The following units of the United States Marine Corps participated in Operation Strikeback in September 1957 are listed below.[43]

Carrier-based air strike operations in the Norwegian Sea pioneered by Operation Stikeback became the cornerstone of the forward defense of NATO's northern flank as set forth in the U.S. Navy's Forward Maritime Strategy, as published in 1984, championed by Secretary of the Navy John Lehman and Chief of Naval Operations Admiral James D. Watkins, USN, during the Reagan Administration, and as executed by such a major NATO naval exercises as Ocean Safari '85 and Northern Wedding '86.[44][45][46][47]

In a 2008 article, retired General Bernard E. Trainor, USMC, noted the success of this maritime strategy that helped to end the Cold War:

By going on the immediate offensive in the high north and putting the Soviets on the defensive in their home waters, the Maritime Strategy not only served to defend Scandinavia, but also served to mitigate the SLOC problem. The likelihood of timely reinforcement of NATO from the United States was now more than a pious hope.

With the emergence of an offensive strategy in the 1980s, a change in mindset was energized by concurrent dramatic advances in American technology, especially in C4ISR and weapon systems, that were rapidly offsetting Soviet numerical and material superiority in Europe. No lesser light than the USSR Chief of the General Staff, Marshal Nikolai Ogarkov warned that American superiority was shifting the "correlation of forces" in NATO's favor. He called the phenomenon a "military technological revolution." By the end of the decade the military threat from the Soviet Union was consigned to the dust bin of history and with it, the Cold War.[48][49]

The U.S. Navy's Forward Maritime Strategy provided the strategic rationale for the 600-ship Navy program, and it would be superseded in 2007 by A Cooperative Strategy for 21st Century Seapower.[50][51]