804 Naval Air Squadron (804 NAS) was a Naval Air Squadron of the Royal Navy, formed in November 1939 from part of 769 NAS Sea Gladiators which had been detached to RNAS Hatston. The squadron was merged into 800 NAS in June 1944 and subsequently reformed in September.[1]

The last picture of Glorious before her final battle, escorted by HMS Diana

During World War II, she was equipped with various aircraft types in differing roles. When formed at Hatston, 804 used Gloster Sea Gladiators in defence of the naval base at Scapa Flow, but was transferred in April 1940 to HMS Glorious to provide air cover for the ferrying of 269 Squadron RAF's Gladiators to Norway after the German invasion. This was a brief assignment and in early May the squadron was transferred to HMS Furious at Campbeltown, thus missing Glorious' sinking. Between May and September 1940 804 squadron returned to Hatston, and was subsequently recognised as one of the two FAA squadrons that operated with RAF Fighter Command in the Battle of Britain.[1]

In October 1940 804 Squadron was re-equipped with Martlet I fighters, and first operated the new fighters out of RNAS Skaebrae in the Orkney Islands in October 1940. On 25 December 1940, two of the squadron's Martlets shot down a Junkers Ju 88 off Scapa Flow, thus scoring the first aerial victory in Europe by an American-made aircraft in history and the first by any variant of the Grumman F4F Wildcat.[2] Further re-equipping occurred in February 1941 at RNAS Yeovilton with Fulmar IIs and Sea Hurricanes.[1]

In April 1941 the squadron was assigned to operate from catapult-armed ships (CAM ships and fighter catapult ships) until this role was taken over by the RAF's Merchant Ship Fighter Unit in May 1942. During this assignment, the squadron had aircraft on HMS Sea Hurricane from HMS Maplin, piloted by Robert Everett, shot down an Fw 200 Condor, the first such victory for a catapult launched aircraft.[3]

In July 1942, the squadron escorted Gibraltar convoys on board HMS Argus and later, in October, now equipped with the Sea Hurricane IIc, joined HMS Dasher for the North African landings. The squadron was re-equipped yet again in August 1943 Hellcat Is and in October joined No 7 Naval Fighter Wing. Two months later they embarked on HMS Emperor and accompanied a US-bound convoy.[1] 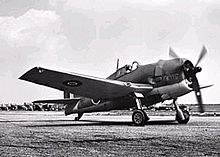 The squadron participated in the successful attack on 3 April 1944 on the German battleship Tirpitz (Operation Tungsten) in Altafjord, northern Norway. Fleet Air Arm Barracuda dive-bombers from HMS Furious and HMS Victorious were covered by the 7th Naval Fighter Wing, including 804 NAS.[1]

The squadron reformed in September 1944 at Wingfield airfield, South Africa with 24 Hellcat IIs and in January 1945, they embarked on HMS Ameer to provide cover during the landings on Ramree Island, and subsequently missions over Sumatra and Malaya. In April 1945 the squadron embarked on HMS Empress and also HMS Shah for attacks on the Andaman Islands and the coast of Burma, returning to HMS Ameer in June for attacks on Sumatran airfields and Phuket Island, only returning to the United Kingdom after VJ Day in November 1945.[1]

She was recommissioned at RNAS Lossiemouth on 1 March 1960. The squadron was equipped with 6 Supermarine Scimitar F MK1 aircraft under the command of Lieutenant Commander T. Binney RN. The 800 Series of Naval Air Squadrons were allocated to carrier and land based operational squadrons of the Fleet Air Arm. After a four month work up period the Squadron embarked in HMS Hermes. Other than for two periods ashore at Lossiemouth, the squadron operated from Hermes until the unit disbanded in September 1961. The squadron took part in both the Farnborough Airshow and the Paris Air Show in 1961, operating from the deck of Hermes rather than a shore base and flying directly to and from the shows.