Joint Force Command Brunssum (JFC-B) is the NATO military command based in Brunssum, Netherlands. JFC-B reports to Supreme Headquarters Allied Powers Europe (SHAPE) based at Casteau, Belgium. It is one of three operational level commands in the NATO command structure, the others being Joint Force Command Naples, Italy and Joint Command Lisbon, Portugal.[1] JFC-B also serves as the NATO higher headquarters for the International Security Assistance Force in Afghanistan.[2]

The NATO command at Brunssum has been renamed twice due to reorganization within NATO. Originally it was known as Headquarters, Allied Forces Central Europe (AFCENT) when it was activated in 1953 in Fontainebleau, France.

AFCENT remained in France under French command until 1967, when France removed itself from the military command structure. The headquarters was moved to Brunssum in 1967 and activated under German command. In 2001 a British General was appointed as commander, setting up the rotation between Germany and the UK that is currently in use.

In 2000, the deactivation of Headquarters, Allied Forces Northern Europe (AFNORTH) in Kolsås, Norway led to the redesignation of AFCENT as Regional Headquarters, Allied Forces Northern Europe (RHQ AFNORTH). The headquarters operated as RHQ AFNORTH until 2004, when it was renamed Allied Joint Force Command Brunssum (JFC-B) to add flexibility to the military command structure by removing regional restrictions. 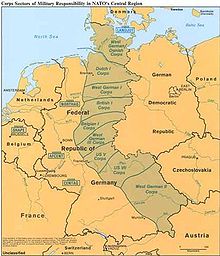 Corps sectors of military responsibility in NATO's central region in the 1980s.

Hendrik Camp also boasts an all ranks club called Club 13, a small tax-free department store called the B&S Store, a film theatre, and a gymnasium. Additional services are provided by the AAFES on US Army Garrison Schinnen.

Static War Headquarters Castlegate is a NATO command and communications bunker located approximately 2 km north-east of the town of Linnich, Germany.[8] SWHQ Castlegate is operated in caretaker status by a German military contingent.[9]

During the Cold War, AFCENT was the higher headquarters for the Northern Army Group (NORTHAG), the Central Army Group (CENTAG) (with III Corps, V Corps, VII Corps and II Corps from north to south) and Allied Air Forces Central Europe (AAFCE). The commanders of these units, called Principal Subordinate Commanders (PSC), had only limited peacetime authority. For example, the British Army of the Rhine (BAOR) was assigned to NORTHAG, but the PSC has little or no say in areas such as training, doctrine, logistics, and rules of engagement (ROE).

The U.S. III Corps was allocated as the AFCENT reserve. On activation, it would have deployed to Europe from bases in the United States. A forward element, 3rd Brigade, US 2nd Armored Division, was located at Garlstedt, Germany.[10] US III Corps also maintained a forward headquarters at Tapijn Kazerne, Maastricht, Netherlands.[11]

Because of the NATO relationship with France, they install permanently a liaison-officer, who communicate on high level with the several commanders in charge. Different then by the commanders of AFCENT, always a General from the UK or Germany,the liaison-officer is always a high-ranking officer with the grade of Major or Colonel, and is mostly in a rotation of 4 years between the SAS-countries, The Netherlands and Belgium. By example, between 1978 and 1986, Air Force Major Paul De Wever, a Belgian high-ranking Officer, was in this function installed.