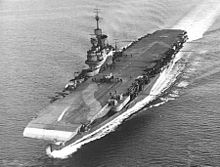 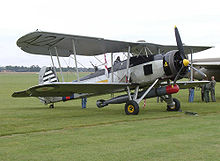 A still flying example of a Fairey Swordfish

The squadron initially formed at RNAS Worthy Down on 9 October 1939, from the remnants of 811 and 822 squadrons that had survived the sinking of their carrier HMS Courageous in September 1939,[3] with Fairey Swordfish aircraft. The squadron disbanded in November 1939, but reformed the same month however.[3] In May 1940 the squadron provided support to the Dunkirk evacuation.[3] In June 1940 the squadron embarked on HMS Illustrious and sailed for the Mediterranean in August, attacking and minelaying Benghazi, Rhodes and Tobruk.[3] The squadron gained early fame with its involvement in the Battle of Taranto in 1940. The battle consisted of a raid on the Italian Battlefleet in harbour at Taranto which redefined the use of air power from the sea. During the battle only one squadron aircraft was lost (unfortunately with the Squadrons Commanding Officer),[3] compared to the crippling of half the Italian Fleet. In March 1941, the squadron was once again involved in a major battle of the Second World War at the Battle of Cape Matapan; a battle that ensured the Italian Fleet did not leave harbour until the end of the war. The squadron re-equipped in August 1941 with a mixture of Swordfish and Fairey Albacore aircraft, operating from shore bases in support of the North African campaign.[3] In July 1943, 815 Squadron was assigned to No. 201 (Naval Co-operation) Group with a detachment of Swordfish assigned to AHQ Malta. Both units participated in Operation Husky on 10 July 1943, before 815 Squadron was disbanded.

The squadron reformed in October 1943 at RNAS Lee-on-Solent (HMS Daedalus) to operate Fairey Barracuda torpedo bombers, operating from Indomitable with the Eastern Fleet, flying airstrikes over Sumatra in August–September 1944.[4] It disbanded once again in November 1944 before reforming in December 1944 at RNAS Machrihanish (HMS Landrail), flying Barracudas for anti-submarine operations, the following month being spent doing DLT (deck landing training) on HMS Campania.[3] The squadron then was transferred to the Far East aboard HMS Smiter, but saw no action before VJ-Day, and returned to the UK in September 1945 aboard HMS Fencer.[3] 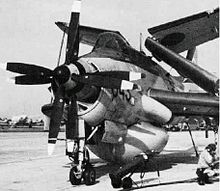 A Grumman Avenger AS.5, albeit one of 744 Naval Air Squadron

The squadron disbanded some time after the war and reformed in 1947 from 744 Squadron, flying Grumman Avengers, who were replaced in their turn with Fairey Gannets the last fixed-wing aircraft of the Squadron when it disbanded at RNAS Culdrose (HMS Seahawk), July 1958.[5]

A Westland Whirlwind HAS.7 from the Empire Test Pilots' School

In September 1958 the squadron reformed and the first helicopters arrived in the form of the Westland Whirlwind HAS.7, moving to RNAS Portland (HMS Osprey) when engine troubles sterted to plague the Whirlwinds. The squadron eventually disbanded here on August 1959, by being renumbered to 737 Squadron.[5]

The squadron reformed again on 8 September 1959, still on with Whirlwinds. After a Far East tour on HMS Albion, it disbanded again in December 1960.[5]

A Westland Wessex, probably HAS.1 XM837 at the SBAC show Farnborough 1962

On the Westland Lynx 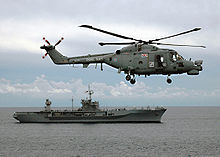 A Westland Lynx HAS.8

In January 1981, after a gap of some 15 years, the squadron re-commissioned at RNAS Yeovilton (HMS Heron) with the Lynx HAS.2 as the Headquarters Squadron for embarked Lynx Flights. It then moved to RNAS Portland (HMS Osprey) in 1982 and it saw action during the Falklands War of 1982. The flights were shared with 829 Naval Air Squadron until they were amalgamated in 1993 when they became the largest helicopter squadron in the world at the time.[6] In 1998/9 after an absence of nearly 17 years, the unit moved back to RNAS Yeovilton, with the closure of RNAS Portland.

Several of the Lynx Helicopters are stated as part of the Response Force Task Group.[7]

Currently, the squadron only flies the Westland Lynx HMA.8. A list of aircraft that have been flown by 815 Naval Air Squadron in the past include:[4][1]