1972 Nixon visit to China
For other uses, see Nixon in China (disambiguation). 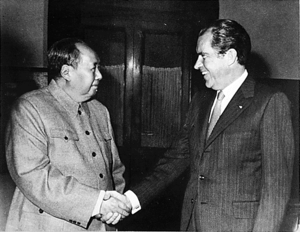 U.S. President Richard Nixon's 1972 visit to the People's Republic of China was an important step in formally normalizing relations between the United States and the People's Republic of China. It marked the first time a U.S. president had visited the PRC, who at that time considered the U.S. one of its staunchest foes. The visit has become a metaphor for an unexpected or uncharacteristic action by a politician.

Improved relations with the Soviet Union and the People’s Republic of China are often cited as the most successful diplomatic achievements of Nixon’s presidency.[1] After World War II, Americans saw relations between the United States and the Soviet Union deteriorating, Russians consolidating communist allies over much of Eastern Europe, and China teetering on the edge of communism. Many Americans felt concern communists might cause the downfall of schools or labor unions.[citation needed] One of the main reasons Richard Nixon became the 1952 Vice-president candidate on the Eisenhower ticket was his strong anti-communism stance. Despite this, in 1972 Nixon became the first U.S. president to visit mainland China while in office.[2] Ulysses S. Grant visited China on a world tour after leaving office. Herbert Hoover lived in China briefly in 1899 before becoming President and could speak fluent Mandarin. Dwight Eisenhower made a state visit to Taiwan in 1960, during the period when the United States recognized the government there as the sole government of China.

In July 1971, President Nixon's National Security Advisor Henry Kissinger secretly visited Beijing during a trip to Pakistan, and laid the groundwork for Nixon's visit to China. 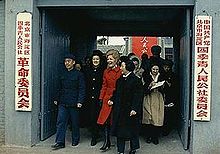 Pat Nixon in the People's Republic of China

From February 21-28, 1972, U.S. President Richard Nixon traveled to Beijing, Hangzhou and Shanghai. Almost as soon as the American president arrived in the Chinese capital he was summoned for a quick meeting with Chairman Mao. Secretary of State William P. Rogers was excluded from this meeting and the only other American present was National Security Council staffer (and later U.S. Ambassador to China) Winston Lord. To avoid embarrassing Rogers, Lord was cropped out of all the official photographs of the meeting.[3] Although Nixon was in China for a week, this would be his sole meeting with the top Chinese leader.

Unknown to Nixon and the rest of the American diplomats at the time, Chairman Mao was in poor health and had been ill only nine days prior to Nixon's arrival. Neverless, Mao felt strong enough to insist to his officals for a meeting with President Nixon upon his arrival. Upon meeting Nixon for the first time, Mao, speaking through his translator, said to Nixon: "I belive our old friend Chiang Kai-shek would not approve of this".

Nixon held many meetings with Chinese Premier Zhou Enlai during the trip, which included visits to the Great Wall, Hangzhou, and Shanghai. At the conclusion of his trip, the United States and the PRC Governments issued the Shanghai Communiqué, a statement of their foreign policy views and a document that has remained the basis of Sino-American bilateral relations. Kissinger stated that the U.S. also intended to pull all its forces out of the island of Taiwan.[4] In the communiqué, both nations pledged to work toward the full normalization of diplomatic policy.

Richard Nixon and Zhou Enlai speaking at a banquet

After Nixon's visit he spoke about what this meant for the two countries in the future:

"This was the week that changed the world, as what we have said in that Communique is not nearly as important as what we will do in the years ahead to build a bridge across 16,000 miles and 22 years of hostilities which have divided us in the past. And what we have said today is that we shall build that bridge."[4]

Richard Nixon wrote many books about his international contributions and accomplishments. Beyond Peace is the last of his post-career volumes, addressing the need for the United States to beat the competition in a world transformed by the collapse of the Communist bloc.

Max Frankel of The New York Times received the Pulitzer Prize for International Reporting for his coverage of the event.