Containment
This article is about the United States policy. For other uses, see Containment (disambiguation). 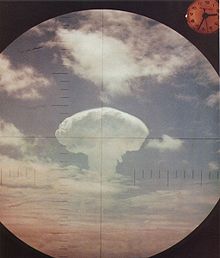 A 1962 nuclear explosion as seen through the periscope of a U.S. Navy submarine.

Containment was a United States policy using military, economic, and diplomatic strategies to stall the spread of communism, enhance America’s security and influence abroad, and prevent a "domino effect". A component of the Cold War, this policy was a response to a series of moves by the Soviet Union to enlarge communist influence in Eastern Europe, China, Korea, and Vietnam. It represented a middle-ground position between détente and rollback. The basis of the doctrine was articulated in a 1946 cable by U.S. diplomat George F. Kennan. As a description of U.S. foreign policy, the word originated in a report Kennan submitted to U.S. Defense Secretary James Forrestal in 1947, a report that was later used in a magazine article. It is a translation of the French cordon sanitaire, used to describe Western policy toward the Soviet Union in the 1920s.

The word containment is associated most strongly with the policies of U.S. President Harry Truman (1945–53), including the establishment of the North Atlantic Treaty Organization (NATO), a mutual defense pact. Although President Dwight Eisenhower (1953–61) toyed with the rival doctrine of rollback, he refused to intervene in the Hungarian Uprising of 1956. President Lyndon Johnson (1963–69) was firmly committed to containment, forcing him to fight a war he did not want in Vietnam. President Richard Nixon (1969–74), working with his top advisor Henry Kissinger, rejected containment in favor of friendly relations with the Soviet Union and China; this détente, or relaxation of tensions, involved expanded trade and cultural contacts. President Jimmy Carter (1976–81) emphasized human rights rather than anti-communism, but dropped détente and returned to containment when the Soviets invaded Afghanistan in 1979. President Ronald Reagan (1981–89), denouncing the Soviet state as an "evil empire", escalated the Cold War and promoted rollback in Nicaragua and Afghanistan. Central programs begun under containment, including NATO and nuclear deterrence, remained in effect even after the end of the Cold War in 1989 and the breakup of the Soviet Union in 1991.

Following the 1917 communist revolution in Russia, there were calls by Western leaders to isolate the Bolshevik government, which seemed intent on promoting worldwide revolution. In March 1919, French Premier Georges Clemenceau called for a cordon sanitaire, or ring of non-communist states, to isolate the Soviet Union. Translating this phrase, U.S. President Woodrow Wilson called for a "quarantine." Both phrases analogize communism to a contagious disease. Nonetheless, during World War II, the U.S. and the Soviet Union found themselves allied in opposition to the Axis powers.

Key State Department personnel grew increasingly frustrated with and suspicious of the Soviets as the war drew to a close. Averell Harriman, U.S. ambassador in Moscow, once a "confirmed optimist" regarding U.S.-Soviet relations,[1] was disillusioned by what he saw as the Soviet betrayal of the 1944 Warsaw Uprising as well as by violations of the February 1945 Yalta Agreement concerning Poland.[2] Harriman would later have significant influence in forming Truman's views on the Soviet Union.[3]

In February 1946, the U.S. State Department asked George F. Kennan, then at the U.S. Embassy in Moscow, why the Russians opposed the creation of the World Bank and the International Monetary Fund. He responded with a wide-ranging analysis of Russian policy now called the Long Telegram:

Kennan's cable was hailed in the State Department "the appreciation of the situation that had long been needed."[5] Kennan himself attributed the enthusiastic reception to timing: "Six months earlier the message would probably have been received in the State Department with raised eyebrows and lips pursed in disapproval. Six months later, it would probably have sounded redundant."[5] Clark Clifford and George Elsey produced a report elaborating on the Long Telegram and proposing concrete policy recommendations based on its analysis. This report, which recommended "restraining and confining" Soviet influence, was presented to Truman on September 24, 1946.[6]

In January 1947, Kennan submitted a report entitled "The Sources of Soviet Conduct" to Defense Secretary Forrestal. The use of the word "containment" originates from this report: "In these circumstances it is clear that the main element of any United States policy toward the Soviet Union must be that of long-term, patient but firm and vigilant containment of Russian expansive tendencies."[7] Forrestal gave permission for the report to be published in the journal Foreign Affairs under the pseudonym "X." Biographers Townsend Hoopes and Douglas Brinkley have dubbed Forrestal "godfather of containment" largely on account of his work in distributing Kennan's writing.[8]

In March 1947, President Truman, a Democrat, asked the Republican controlled Congress to appropriate $400 million in aid to the Greek and Turkish governments, then fighting Communist subversion.[9] Truman pledged to, "support free peoples who are resisting attempted subjugation by armed minorities or by outside pressures."[9] This pledge became known as the Truman Doctrine. Portraying the issue as a mighty clash between "totalitarian regimes" and "free peoples," the speech marks the onset of the Cold War and the adoption of containment as official U.S. policy. Congress appropriated the money.

Truman's motives on this occasion have been the subject of considerable scholarship and several schools of interpretation. In the orthodox explanation of Herbert Feis, a series of aggressive Soviet actions in 1945–47 in Poland, Iran, Turkey and elsewhere awakened the American public to this new danger to freedom and Truman responded.[10] In the revisionist view of William Appleman Williams, Truman's speech was an expression of longstanding American expansionism.[10] In the realpolitik view of Lynn Davis, Truman was a naive idealist who unnecessarily provoked the Soviets by couching disputes in ideological terms like democracy and freedom.[11]

According to psychological analysis by Deborah Larson, Truman felt a need to prove his decisiveness and feared that aides would make unfavorable comparisons between him and his predecessor, Franklin Roosevelt.[12] "I am here to make decisions, and whether they prove right or wrong I am going to take them," he once said.[13] The drama surrounding the announcement of the Truman Doctrine catered to president's self-image of a strong and decisive leader, but his real decision-making process was more complex and gradual. The timing of the speech was not a response to any Soviet action, but rather to the fact that the Republican Party had just gained control of Congress.[14] Truman was little involved in drafting the speech and did not himself adopt the hard-line attitude implied by the Truman Doctrine until several months later.[15]

Truman followed up his speech with a series of measures to contain Soviet influence in Europe, including the Marshall Plan, or European Recovery Program, and NATO, a military alliance between the U.S. and Western European nations created in 1949. Because containment required detailed information about Communist moves, the government relied increasingly on the Central Intelligence Agency (CIA). Established by the National Security Act of 1947, the CIA conducted espionage in foreign lands, some of it visible, more of it secret. Truman approved a classified statement of containment policy called NSC 20/4 in November 1948, the first comprehensive statement of security policy ever created by the United States. The Soviet Union first nuclear test in 1949 prompted the National Security Council to formulate a revised security doctrine. Completed in April 1950, it became known as NSC 68. It concluded that a massive military buildup was necessary to the deal with the Soviet threat. According to the report, drafted by Paul Nitze and others:

The U.S. entered the Korean War to defend South Korea from a communist invasion, that is, following containment doctrine. However, the success of the Inchon landing inspired the U.S. and the United Nations to adopt a Rollback strategy and overthrow the Communist North Korean regime, thus allowing nationwide elections under U.N. auspices.[17] General Douglas MacArthur then advanced across the 38th parallel into North Korea. The Chinese then sent in large armies and defeated the U.N. forces, pushing them below the 38th parallel. Truman blamed MacArthur's focus on victory and adopted a "limited war" policy. His focus shifted to negotiating a settlement, which was finally reached in 1953. For his part, MacArthur denounced Truman's "No-win policy."[18]

Many Republicans, including John Foster Dulles, concluded that Truman had been too timid. In 1952, Dulles called for rollback and the eventual "liberation" of eastern Europe.[19] Dulles was named secretary of state by incoming President Dwight Eisenhower, but Eisenhower's decision not to intervene during the Hungarian Uprising of 1956 made containment a bipartisan doctrine. President Eisenhower relied on clandestine CIA actions to undermine hostile governments and used economic and military foreign aid to strengthen governments supporting the American position in the Cold War.[20]

Senator Barry Goldwater, the Republican candidate for president in 1964, challenged containment and asked, "Why not victory?"[21] President Johnson, the Democratic nominee, answered that rollback risked nuclear war. Johnson explained containment doctrine by quoting the Bible: "Hitherto shalt thou come, but not further."[22] Goldwater lost to Johnson in the general election by a wide margin. Johnson adhered closely to containment during the Vietnam War. Rejecting proposals by General William Westmoreland that U.S. ground forces advance into Laos and cut communist supply lines, Johnson gathered a group of elder statesmen called The Wise Men. This group included Kennan, Acheson and other former Truman advisors. Rallies in support of the troops were discouraged for fear that a patriotic response would lead to demands for victory and rollback.[22] Military responsibility was divided among three generals so that no powerful theater commander could emerge to challenge Johnson as MacArthur had challenged Truman.[23]

Nixon, who replaced Johnson in 1969, referred to his foreign policy as détente, or a relaxation of tension. Although it continued to aim at restraining the Soviet Union, it was based on political realism, or thinking in terms of national interest, as opposed to crusades against communism or for democracy. Emphasis was placed on talks with the Soviet Union concerning nuclear weapons called the Strategic Arms Limitation Talks. Nixon reduced U.S. military presence in Vietnam to the minimum required to contain communist advances, a policy called Vietnamization. As the war continued, it grew less popular. A Democratic Congress forced Nixon, a Republican, to abandon this policy in 1973 by enacting the Case-Church Amendment. This law ended U.S. military involvement in Vietnam and led to a communist takeover of South Vietnam and Cambodia.

President Jimmy Carter (1977–81) came to office committed to a foreign policy that emphasized human rights. But in response to the Soviet invasion of Afghanistan, containment was again made a priority. The wording of the Carter Doctrine (1980) intentionally echoes that of the Truman Doctrine.

Following the communist victory in Vietnam, Democrats began to view further communist advance as inevitable while Republicans returned to rollback doctrine. Ronald Reagan, a long-time advocate of rollback, was elected U.S. president in 1980. Reagan took a more aggressive approach to dealings with the USSR, believing that détente was misguided and peaceful coexistence was tantamount to surrender. When the Soviet Union invaded Afghanistan in 1979, American policy makers worried that the Soviets were making a run for control of the Persian Gulf. Throughout the 1980s, under a policy that came to be known as the Reagan Doctrine, the United States provided technical and economic assistance to the Afghan guerrillas fighting against the Soviet army.[24] By sending military aid to anti-communist insurgents in Afghanistan, Angola, Cambodia, and Nicaragua, he confronted existing communist governments and went beyond the limits of containment doctrine. He deployed the Pershing II missile in Europe and promoted research on a Strategic Defense Initiative, which critics called "Star Wars", to shoot down missiles fired at the United States. Reagan's aim was to defeat the Soviets through an expensive arms buildup the Soviets could not match. However, Reagan continued to follow containment doctrine in several key areas. He pursued a comprehensive nuclear disarmament initiative called START I and policy toward Europe continued to emphasize a NATO-based defensive approach.

The end of the Cold War in 1989 marked the official end of U.S. containment policy, though it kept its bases in the areas around Russia, such as ones in Iceland, Germany, and Turkey.