Yolo County is a county located in the northern part of the U.S. state of California, bordered by the other counties of Sacramento, Solano, Napa, Lake, Colusa, and Sutter. The city of Woodland is its county seat, though Davis is its largest city.

As of the 2010 census, Yolo County had a population of 200,849. Excluding the conurbation of the University of California, Davis and the surrounding City of Davis, and the neighboring City of Sacramento, Yolo County remains a relatively rural agricultural region. This is evidenced by the multi-billion dollar California tomato industry, centering around Yolo County, dominating 90% of the canning and processed tomato market in the United States.

Yolo County is part of the Greater Sacramento area.

Yolo County was one of the original counties of California, created in 1850 at the time of statehood.

In the original act of 1850 the name was spelled "Yola." Yolo is a Native American name variously believed to be a corruption of a tribal name Yo-loy meaning "a place abounding in rushes" or of the name of the chief, Yodo, or of the village of Yodoi.

The county is governed by a board of five district supervisors as well as the governments of its four incorporated cities: Davis, West Sacramento, Winters, and Woodland. 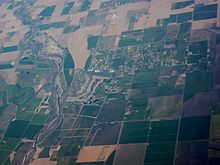 Other unincorporated areas or communities not incorporated into the above cities, include: 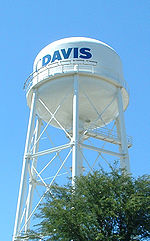 Transportation in Yolo County is based on a system of numbered County Roads. The numbering system works in the following way:

Each integer road number is one mile (1.6 km) apart, with letters designating occasional roads less than one mile (1.6 km) apart. County roads entering urban areas generally are named once they cross the city boundary. Some examples include County Road 101 in Woodland being renamed Pioneer Ave and County Road 102 in Davis being named Pole Line Road.

Yolo is a strongly Democratic county in Presidential and congressional elections. The last Republican to win a majority in the county was Dwight Eisenhower in 1952.

Yolo is part of California's 1st and 2nd congressional districts, which are held by Democrat Mike Thompson and Republican Wally Herger respectively. In the state legislature, Yolo is in the 2nd and 8th Assembly districts, which are held by Republican Jim Nielsen and Democrat Mariko Yamada, respectively, and the 5th Senate district, which is held by Democrat Lois Wolk.

There were 59,375 households out of which 33.6% had children under the age of 18 living with them, 47.6% were married couples living together, 11.1% had a female householder with no husband present, and 36.9% were non-families. 23.3% of all households were made up of individuals and 7.3% had someone living alone who was 65 years of age or older. The average household size was 2.71 and the average family size was 3.25.

The county's public schools are managed by the Yolo County Office of Education.