There are several different types of districts in California. The U.S. state of California is geographically divided into various districts for political and administrative purposes. 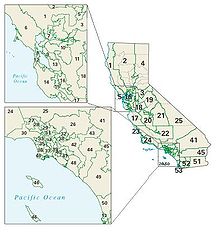 California is divided into 53 Congressional districts.

Each district elects a representative to serve in the United States House of Representatives as part of the California's congressional delegation.

California's current districts have been in place since 2003.

Prior to 1968, state senate districts were restricted such that one county could only hold at most one seat. This led to the situation of Los Angeles County, with 6 million residents as of 1968, receiving 600 times less representation than residents of Alpine County and Calaveras County, some of California's least populous counties. The Reynolds v. Sims decision by the United States Supreme Court compelled all states to draw up districts that were apportioned by population rather than geography. As such, boundaries were changed such that equal representation was provided.

California is divided into 80 Assembly districts with each Assembly person representing approximately 400,000 residents.California Assembly district maps. There has been talk, but not much action, on changing the way that election districts are chosen by taking the choices away from the California Legislature. Each Assembly member is limited to three terms by a referendum passed by California voters. In 2008, Proposition 93 unsuccessfully attempted to change term limits to a maximum of twelve years or six terms instead of three.

The California Court of Appeal for the First District is located in San Francisco. Its jurisdiction is over the following counties: Alameda, Contra Costa, Del Norte, Humboldt, Lake, Marin, Mendocino, Napa, San Francisco, San Mateo, Solano, and Sonoma. It is divided into five non-geographical divisions with four justices each.

The California Court of Appeal for the Second District has its main courthouse in Los Angeles and the secondary courthouse, hosting Division Six, in Ventura. Division Six handles appeals from San Luis Obispo, Santa Barbara, and Ventura Counties, while Divisions One through Five, Seven, and Eight handle appeals from Los Angeles County. Each division has four justices.

The California Court of Appeal for the Third District is located in Sacramento. Its jurisdiction is over the following counties: Alpine, Amador, Butte, Calaveras, Colusa, El Dorado, Glenn, Lassen, Modoc, Mono, Nevada, Placer, Plumas, Sacramento, San Joaquin, Shasta, Sierra, Siskiyou, Sutter, Tehama, Trinity, Yolo, and Yuba. It has 11 justices and is not divided into divisions.

The California Court of Appeal for the Fourth District is unique in that it is divided into three geographical divisions that are administratively separate, which even have different case number systems, and yet remain referred to as a single district.

The Division One courthouse is located in San Diego. It handles appeals from Imperial and San Diego Counties. It has 10 justices.

The Division Two courthouse is located in Riverside. It handles appeals from Inyo, Riverside, and San Bernardino Counties. It has seven justices. It is the only California appellate court that issues a tentative opinion before oral argument.

The Division Three courthouse is located in Santa Ana. It handles appeals from Orange County. It has eight justices.

The California Court of Appeal for the Fifth District is located in Fresno. Its jurisdiction covers the following counties: Fresno, Kern, Kings, Madera, Mariposa, Merced, Stanislaus, Tulare, and Tuolumne. It has nine justices.

The California Court of Appeal for the Sixth District is located in San José. Its jurisdiction covers San Benito, Santa Clara, Santa Cruz, and Monterey Counties. It has seven justices.

Board of Equalization Districts

The third Equalization District is made up of the following counties: Imperial, Orange, Riverside, San Diego, a portion of Los Angeles, and a portion of San Bernardino.