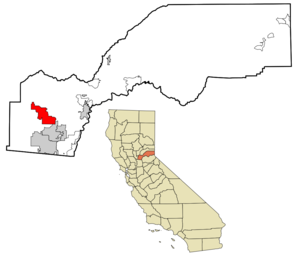 mapsize = 250x200px
map_caption = Location in Placer County and the state of

Lincoln is a city in Placer County, , . The population was estimated to be 42,126 in 2007 [ [http://www.census.gov/popest/cities/tables/SUB-EST2007-04-06.xls US Census Population Estimates for Places in California] ] . On July 17, 2007, Forbes.com listed Lincoln as the nation's fastest growing city from 2000 to 2006 with an increase of 238.6% in population [http://www.forbes.com/realestate/2007/07/16/suburbs-growth-housing-forbeslife-cx_mw_0716realestate.html] . This growth is due to Lincoln being located in the rapid suburban development north of Sacramento, in Placer County.

Lincoln is part of the Sacramento-Roseville Metropolitan Statistical Area.

The original townsite was surveyed and laid out in 1859 by along the proposed line of the . The name "Lincoln" was conferred in honor of Charles Lincoln Wilson, one of the organizers and directors of the California Central Railroad. The CCRR was planned as a rail link between the cities of Marysville and Sacramento via a connection to the Sacramento Valley Railroad in Folsom. Grading from Folsom to Marysville commenced in 1858 and was completed to Marysville by 1860. Track laying began that same year and the rails reached the site of Lincoln in early 1861. At this point, due to a lack of funds, further construction on the California Central was temporarily halted and Lincoln experienced a small-scale boom as the northern terminus of this new road. Within a few years, however, more investors were found and the line was extended to Wheatland, in , bringing an end to this early stage of Lincoln's development.

When most of its population and business moved on with the railroad, the town settled into a lull until the early 1870s, when rich deposits of the were discovered nearby. This led to the establishment of , the for which Lincoln is famous, ushering in a new era of prosperity and growth.

Lincoln remained a sleepy town until the mid-1990s, when the suburbs of Sacramento started expanding out past nearby Roseville. The city is now enjoying a new period of growth. As of , the population has been said to be 39,566², a growth of 236.8% since 2000, making Lincoln the U.S.'s fastest growing suburb. [Woolsey, Matt. "Forbes.com". " [http://realestate.msn.com/Buying/Article_forbes.aspx?cp-documentid=5219929&GT1=10341 America's fastest-growing suburbs] ". Retrieved August 7, 2007.]

In June 2004, Lincoln gained additional notoriety when it opened the first casino in the greater Metropolitan Area, .

There were 3,874 households out of which 40.5% had children under the age of 18 living with them, 59.5% were married couples living together, 13.3% had a female householder with no husband present, and 21.7% were non-families. 17.2% of all households were made up of individuals and 6.8% had someone living alone who was 65 years of age or older. The average household size was 2.86 and the average family size was 3.20.