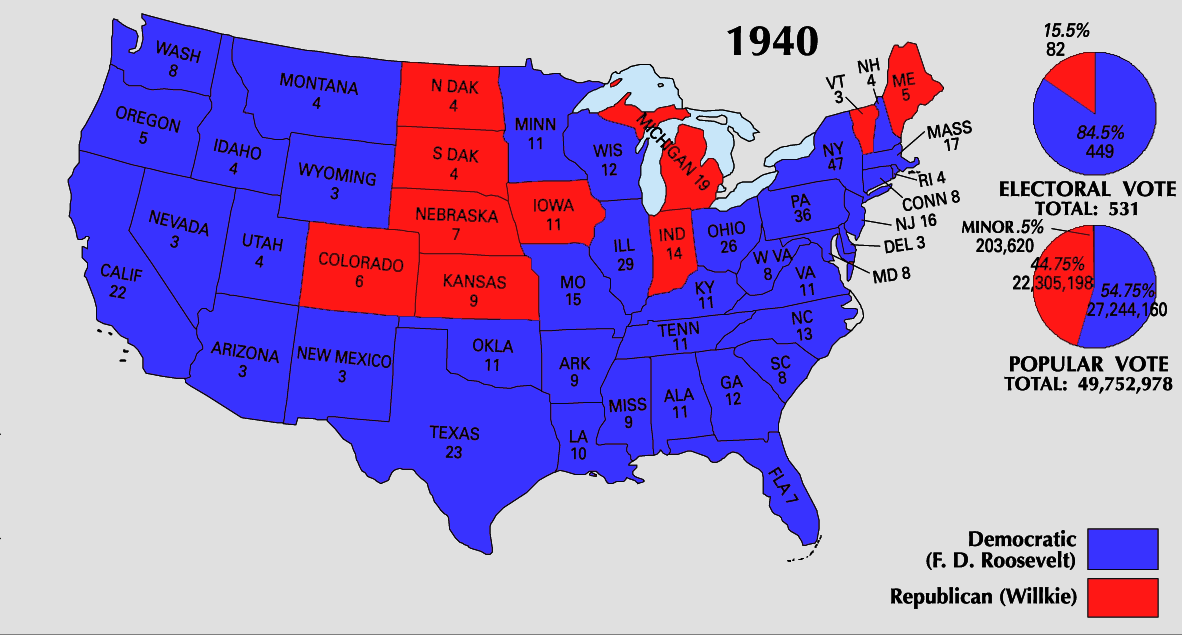 The United States presidential election of 1940 was fought in the shadow of as the United States was emerging from the . Incumbent President (FDR), a Democrat, broke with tradition and ran for a third term, which became a major issue. The surprise Republican candidate was maverick businessman , a who crusaded against Roosevelt's failure to end the Depression and eagerness for war. Roosevelt, aware of strong sentiment in the U.S., promised there would be no foreign wars if he were reelected. Willkie conducted an energetic campaign and managed to revive Republican strength in areas of the and Northeast. However, Roosevelt won a comfortable victory by building strong support from , big-city political machines, ethnic voters, and the traditionally Democratic .

The subsequent passing of the 22nd Amendment of the in 1947 renders this election the only occasion in American history in which a candidate has been elected for a third term as president (Roosevelt would subsequently be elected for a fourth term, although he died after only a few months in office).

Throughout the winter, spring, and summer of 1940 there was much speculation as to whether Roosevelt would break with long-standing tradition and run for an unprecedented third term. The "two-term" tradition, although not yet enshrined in the , had been established by President when he refused to run for a third term in 1796, and no President had ever been elected to a third term. Roosevelt, however, refused to give a definitive statement as to his willingness to be a candidate again, and he even indicated to some ambitious Democrats, such as , that he would not run for a third term and that they could seek the Democratic nomination. However, as swept through and menaced Britain in the spring and summer of 1940 Roosevelt decided that only he had the necessary experience and skills to see the nation safely through the Nazi threat. He was aided by the party's political bosses, who feared that no Democrat except Roosevelt could defeat the popular Willkie.

At the Democratic Convention Roosevelt easily swept aside challenges from Farley and , his Vice-President. Garner was a Texas conservative who had turned against FDR in his second term due to his liberal economic and social policies. As a result, FDR decided to pick a new running mate; he chose of Iowa, his and an outspoken liberal. Wallace was strenuously opposed by many of the party's conservatives, who felt that he was too radical and "eccentric" in his private life (he practiced spiritual beliefs, and often consulted with a Russian spiritual named ) to be an effective running mate. However, FDR insisted that without him on the ticket he would decline renomination. Wallace won the vice-presidential nomination by a vote of 626 to 329 for House Speaker of Alabama.

Willkie crusaded against Roosevelt's attempt to break the two-term presidential tradition, arguing that "if one man is indispensable, then none of us is free." Even some Democrats who had supported Roosevelt in the past disapproved of FDR's attempt to win a third term, and Willkie hoped to win their votes. Willkie also criticized what he claimed was the incompetence and waste in Roosevelt's New Deal welfare programs; he stated that as President he would keep most of FDR's government programs but would make them more efficient. However, many Americans still blamed business leaders for the , and the fact that Willkie symbolized "Big Business" hurt him with many working-class voters. Willkie was a fearless campaigner; he often visited industrial areas where Republicans were still blamed for causing the and where FDR was highly popular. In these areas Willkie frequently had rotten fruit and produce thrown at him, and was heckled by crowds, yet he was unfazed. Willkie also accused Roosevelt of leaving the nation unprepared for war, but Roosevelt preempted the military issue by expanding military contracts and establishing the program to supply the British with badly-needed weapons and warships. Willkie then reversed his approach and charged Roosevelt with secretly planning to take the nation into . The accusation did cut into Roosevelt's support; in response FDR, in a pledge that he would later regret, promised that he would "not send American boys into any foreign wars." On election day - November 5 - Roosevelt received 27 million votes to Willkie's 22 million, and in the Electoral College, Roosevelt defeated Willkie 449 to 82. Willkie did get over six million more votes than the GOP's 1936 nominee, , and he ran strong in areas in the American , taking over 57% of the farm vote. Roosevelt, meanwhile, carried every American city with a population over 400,000 except for .