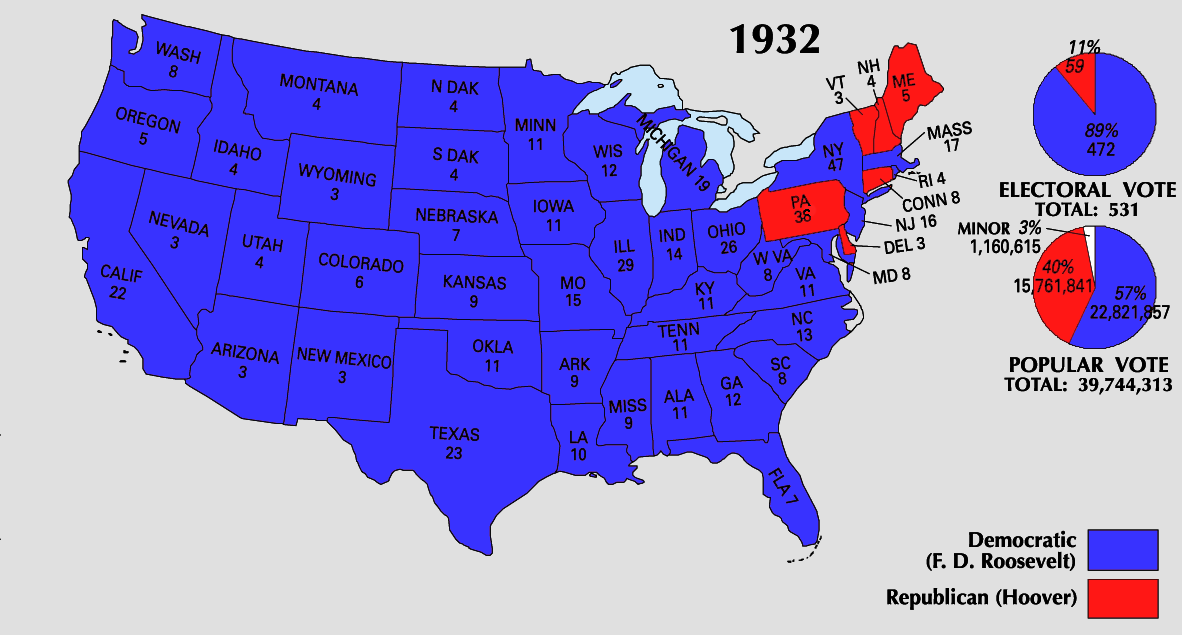 map_size = 400px
map_caption = Presidential election results map. Red denotes states won by Hoover/Curtis, Blue denotes those won by Roosevelt/Garner. Numbers indicate the number of electoral votes allotted to each state.
title = President
before_election =
before_party = Republican Party (United States)
after_election =
after_party = Democratic Party (United States)The United States presidential election of 1932 took place as the effects of the 1929 Stock Market Crash and the were being felt intensely across the country. President Hoover's popularity was falling as voters felt he was unable to reverse the economic collapse, or deal with . saw that Hoover's failure to deal with these problems could be used as a platform for his own election, promising reform in his policy called the . Although vague about how he would remedy the situation, Roosevelt won by a landslide, and this "critical election" marked the collapse of the or . The voters soon were realigned into the , dominated by Roosevelt's .

Throughout the spring and summer of 1932, New York Governor was viewed as the heavy favorite to win the Democratic nomination. However, he did receive some unexpected setbacks, such as when , the 1928 Democratic presidential nominee, defeated Roosevelt in the Massachusetts primary. However, as the Democratic Convention opened in Chicago, Roosevelt was believed to have more delegate votes than all of his opponents combined. Due to the , however, many of Roosevelt's rivals hoped that he would be unable to win the nomination, and that the delegates would turn to them in later ballots.

On the first ballot Roosevelt was well ahead of his rivals, of whom the strongest was Smith. However, he was still below the two-thirds percentage he needed to win. On the next two ballots Roosevelt's total went up only slightly, and his managers - and - became concerned that if he did not win the nomination on the next few ballots, his strength would ebb and move to other candidates. Before the fourth ballot began, Farley and Howe cut a deal with the press baron in which FDR would make , the Speaker of the House of Representatives and also a candidate, his Vice President. Garner and his manager, Texas Congressman , agreed to the deal and on the fourth ballot Garner withdrew his candidacy and supported Roosevelt. Additionally, former Secretary of the Treasury , whose own presidential ambitions were thwarted by Al Smith eight years before, gleefully changed California's votes from Garner to Roosevelt, which set off a stampede that led to Roosevelt's nomination by the end of the fourth ballot.

Both the agricultural Republicans and the extreme hard money Republicans (the latter hoping to nominate Coolidge) balked at the floor managers and voted against the renomination of Vice President , who won with just 55% of the delegate votes.

After making a dangerous airplane trip from his Hyde Park estate to the Democratic convention, Roosevelt accepted the nomination in person. In this history-making speech, he committed himself to battling the with a "" when he stated: "I pledge you, I pledge myself, to a new deal for the American people." Roosevelt's trip to Chicago was the first of several successful, precedent-making moves designed to make him appear to be the candidate of change in the election. Large crowds greeted Roosevelt as he traveled around the nation; his campaign song "Happy Days Are Here Again" became one of the most popular in American political history.

In contrast, President Hoover was widely blamed for the Great Depression; for more than two years Hoover had been issuing statements that the worst was over, only to have the economy make further downturns. Hoover's attempts to publicly campaign were a disaster, as he often had objects (especially rotten fruit and vegetables) thrown at him or his vehicle as he rode through city streets. In his addresses, Hoover attacked Roosevelt as a dangerous radical who would only make the Depression worse by raising taxes and increasing the federal debt to pay for expensive welfare and social-relief programs. However, with unemployment at a record 33% Fact|date=September 2008, Hoover's criticisms failed to gain traction with the public.

The election was held on November 8, 1932. Maine held separate state elections in September.

1932 was a . Roosevelt and the Democratic ticket won a sweeping victory over Hoover and the Republicans, extending their control over the U.S. House and gaining control of the U.S. Senate. Twelve years of Republican leadership came to an end, and twenty consecutive years of Democratic control of the White House would ensue. Until 1932, the Republicans had controlled the Presidency for 56 of the previous 72 years, dating to Abraham Lincoln's election in 1860. After 1932, the Democrats would control the Presidency for 28 of the next 36 years, until the 1968 presidential election created a new alignment which favored the Republicans.The vote for Roosevelt was nearly 8 million higher than that for Smith in 1928, an increase of 52%. Hoover's popular vote was reduced by 26% from his result in the 1928 election. In addition, the vote for most minor parties rose dramatically: increases of 230% for the Socialist Party (Norman Thomas's highest raw vote total of his campaigns); an increase of 112% for the Communist Party; an increase of 305% for the Prohibition Party; and an increase of 57% for the Socialist Labor Party.

Hoover's 17.76% margin of loss is the largest ever margin of defeat for an incumbent President to date.