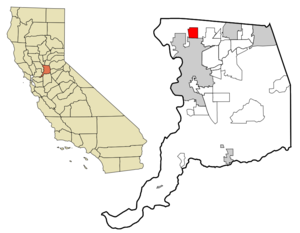 mapsize = 250x200px
map_caption = Location in Sacramento County and the state of

Rio Linda is a (CDP) in Sacramento County, , . It is part of the Sacramento&ndash;Arden-Arcade&ndash;Roseville Metropolitan Statistical Area. As of the 2000 census, the CDP population was 10,466.

The Rio Linda/Elverta community is part of a Mexican Land Grant dating from 1839, known as Rancho Del Paso. In 1910, a Fruit Land Company of Minneapolis acquired 12,000 acres of the Grant and in 1912 the area was subdivided. Renamed in 1913 to Rio Linda it was known as 'Dry Creek Station', a flag stop for the Northern Electric Railroad. Two families settled in Rio Linda by 1912, three more arrived in 1913 and nine more in 1914. By 1918 approximately fifty families in the community, mostly of Scandinavian and Geraman descent. By 1920 poultry farming had proved to be feasible in the area which was advertised throughout several Eastern states during the 1920's. An association was formed in 1942 as the area became well known for its excellent poultry production. [cite web |url= http://www.riolindaelvertaonline.com/index.php?pageId=162666 |title= The Unique History of Rio Linda and Elverta |accessdate= 2008-06-01 ]

There were 3,461 households out of which 38.8% had children under the age of 18 living with them, 54.1% were married couples living together, 15.1% had a female householder with no husband present, and 23.5% were non-families. 17.8% of all households were made up of individuals and 6.6% had someone living alone who was 65 years of age or older. The average household size was 3.01 and the average family size was 3.35.

Rio Linda is home to the Roy Hayer Memorial Race Track. This track is noted as the first track that four-time champion ever competed on. [cite web |url= http://www.nascar.com/2007/news/opinion/06/23/dcaraviello.jgordon.hometown/1.html |title= Only traces of past linger in Gordon's hometown in Cali |accessdate= 2007-12-21 |last= Caraviello |first= David |date= 2007-06-23 |publisher= NASCAR.com ]