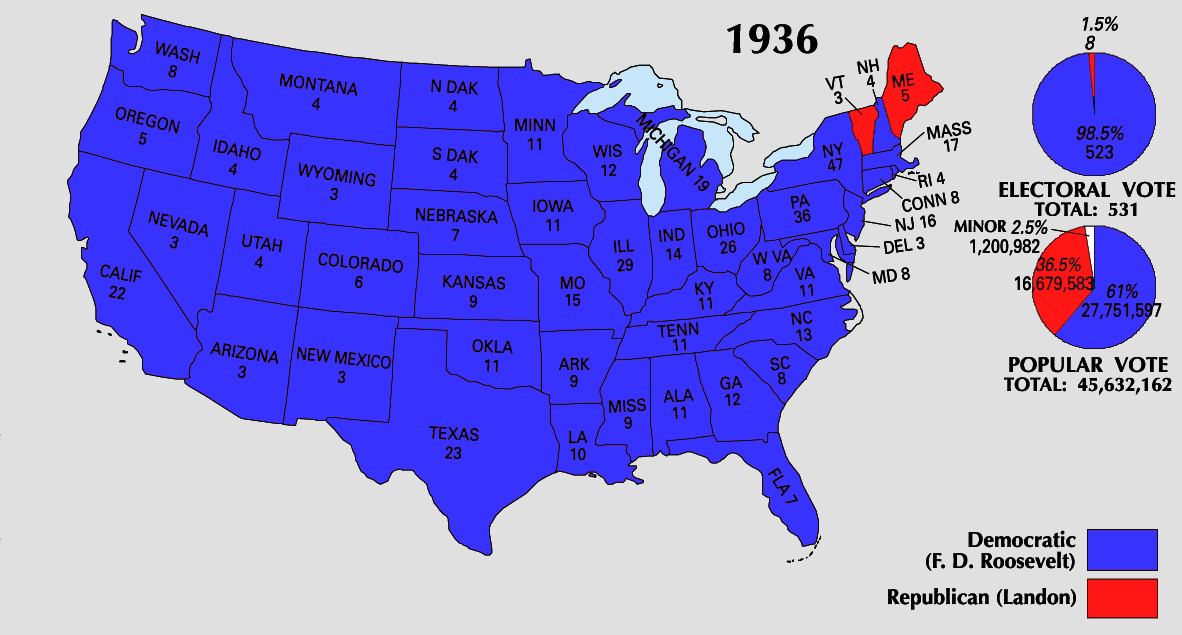 map_size = 400px
map_caption = Presidential election results map. Red denotes states won by Landon/Knox, Blue denotes those won by Roosevelt/Garner. Numbers indicate the number of electoral votes allotted to each state.
title = President
before_election =
before_party = Democratic Party (United States)
after_election =
after_party = Democratic Party (United States)The United States presidential election of 1936 took place as the Great Depression entered its eighth year. Incumbent President was still working to push the provisions of his economic policy through Congress and the courts. However, the New Deal policies he had already enacted, such as Social Security and , had proven to be highly popular with most Americans. Roosevelt's Republican opponent was Governor of , a political moderate. Although some political pundits predicted a close race, Roosevelt would win the greatest electoral landslide since the beginning of the current U.S. two-party system in the 1850s, carrying all but 8 electoral votes.

* , President of the United States from
* , lawyer from

President Roosevelt faced only one primary opponent other than s. , an anti-New Deal lawyer from New York, filed to run against Roosevelt in four primaries. Breckinridge's test of the popularity of the New Deal among Democrats failed, as he lost by wide margins. In New Jersey, President Roosevelt did not file for the preference vote and lost that primary to Breckinridge, though he did receive 19% of the vote on write-ins. Roosevelt's candidates for delegate swept the race in New Jersey and elsewhere. In other primaries, Breckinridge's best showing was his 15% in Maryland. Overall, Roosevelt received 93% of the primary vote, compared to 2% for Breckinridge [http://www.ourcampaigns.com/RaceDetail.html?RaceID=55176] .

The Democratic Party Convention was held in . The delegates unanimously renominated incumbents President and Vice President . At Roosevelt's request, the two-thirds rule, which had given the South a veto power, was repealed.

Although many candidates sought the Republican nomination, only two, Governor Landon and Senator Borah, were considered to be serious candidates. While favorite sons Knox, Warren, Green, and Day won their respective primaries, the 70-year-old Borah, a well-known progressive and "insurgent," carried the , , , , and primaries, while also performing quite strongly in Knox's Illinois and Green's South Dakota. However, the party machinery almost uniformly backed Landon, a wealthy businessman and centrist, who won primaries in and and dominated in the es and at state s.

With Knox withdrawing as Landon's selection for Vice President and Day, Green, and Warren releasing their delegates, the tally at the convention was:

Many people expected , the colorful Democratic senator from , to run as a third-party candidate with his "" program as his platform, but his bid was cut short when he was assassinated in September 1935.

It was later revealed by historian and Long biographer that the senator had never, in fact, intended to run for the presidency in 1936. Instead, he had been plotting with Father , a and populist personality, to run someone else on the soon-to-be-formed "Share Our Wealth" Party ticket. According to Williams, the idea was that this candidate would split the left-wing vote with President Roosevelt, thereby electing a Republican president and proving the electoral appeal of SOW. Long would then wait four years and run for president as a Democrat in 1940.

Prior to Long's death, leading contenders for the role of the sacrificial 1936 candidate included Senators (D-) and William E. Borah (R-) and Governor (FL-). After the assassination, however, the two senators lost interest in the idea and Olson was diagnosed with terminal .

Father Coughlin, who had allied himself with Dr. , a left-wing political activist who was pushing for the creation of an old-age system, and Rev. Gerald L.K. Smith, a well-known and spokesman for the Christian Right, was eventually forced to run Congressman (R-) as the candidate of the newly-created "Union Party." Lemke, who lacked the charisma and national stature of the other potential candidates, fared poorly in the election, barely managing 2% of the vote, and the party was dissolved the following year.

, Chief of the Legion, ran on the ballot in Washington state, managing to secure less than 2,000 votes.

This election is notable for the "" poll, which was based on 10 million questionnaires mailed to readers and potential readers; over two million were returned. The "Literary Digest", which had correctly predicted the winner of the last 5 elections, announced in its October 31 issue that Landon would be the winner with 370 electoral votes. The cause of this mistake is believed to be due to improper sampling: more Republicans subscribed to the "Literary Digest" than Democrats, and were thus more likely to vote for Landon than Roosevelt. This mistake by the "" proved to be devastating to the magazine's credibility, and in fact the magazine went out of existence within a few months of the election.

That same year, , an advertising executive who had begun a scientific poll, predicted that Roosevelt would win the election, based on a quota sample of 50,000 people. He also predicted that the "Literary Digest" would mis-predict the results. His correct predictions made public opinion polling a critical element of elections for journalists and indeed for politicians. The Gallup Poll would become a staple of future presidential elections, and remains one of the most prominent election polling organizations to this day.

Roosevelt won by a landslide, carrying 46 of the 48 states and bringing in many additional Democratic members of Congress. After in 1964, Roosevelt's 60.8% of the popular vote is the second-largest percentage in U.S. history since the nearly unopposed election of in 1820 and his 98.5% of the electoral vote is the highest in two-party competition. Roosevelt won the second largest number of electoral votes in history. Some political pundits predicted that the Republicans, whom many voters blamed for the , would soon become an extinct political party. However, the Republicans would make a strong comeback in the 1938 congressional elections and would remain a potent force in Congress, although they were not able to win the presidency again until 1952.

The Electoral College results, in which Landon only won Maine and Vermont, inspired Democratic party chairman to amend the then-conventional political wisdom of "" into "As goes Maine, so goes Vermont." Additionally, a prankster posted a sign on Vermont's border with New Hampshire the day after the 1936 election; it read: "You are now leaving the United States."