The Cão da Serra de Aires (FCI no. 93) is a medium sized breed of dog of the herding dog type, and is one of the indigenous regional dogs of Portugal. Called the Portuguese Sheepdog in English, the original name refers to the Serra de Aires, a range of hills or mountains marking the boundary between Ribatejo and Oeste, north of the Tagus river. The breed is nicknamed the "cão macaco" (monkey dog, referring to the macaque or monkey) for its furry face and lively attitude.

The Cão da Serra de Aires is a medium-sized dog, standing 45 to 55 cm (17½ to 21½ ins) at the withers for males (females slightly smaller) and 12 to 18 kg (26 to 40 lbs) in weight. The dog's body is long and has a long coat without an undercoat, of medium thickness and described as having a "goat like" texture.[1] The lack of an undercoat made the dog less resistant to extreme weather as a working dog, but as a pet, lack of undercoat makes for easier grooming. Typical coat colours include yellow, chestnut, grey, fawn, wolf grey (fulva e a lobeira), and black, with tan marks. White hairs may be mixed in with the coat, but there should be no large white patches.

The tail should be long, and a natural bobtail is a disqualification under the breed standard, meaning that owners are discouraged from breeding such non typical dogs, and tailless dogs cannot compete for breed championships. The tail should never be docked. The drop (hanging) ears are set high and close to the head. Detailed descriptions of all of the ideal proportions and colours are listed in the original breed standard, as well as faults which are aspects not typical for the breed or that are structural problems.[2] 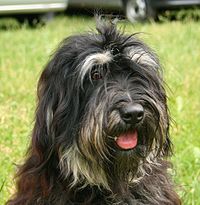 Ancestors of today's breed were traditionally used for herding cows, sheep, goats, horses and even pigs[3] in the Serra de Aires and in the Alentejo.[1] Although there is speculation about the breed's ancestry, as with other breeds who came from undocumented, working dog origins, "...data is rare, or does not exist...most guardian and herding breeds do not have records before 1900".[4] The dog is recognisable as one of the old-fashioned types of European sheepdogs, believed to be closely related to the Pyrenean and Catalan Sheepdogs.[5] It is also believed to be descended from Briards imported into Portugal in the early 1900s by the Conde de Castro Guimarães from Cascais, and crossed with the Pyrenean Sheepdog.[6] The landscape of the Serra de Aires is barren and harsh[7] and it has been noted that the breed would have had a difficult time adapting to the climate there.[8] That it is a recent breed was validated by a DNA study done in Portugal on regional breeds.[9]

The Cão da Serra de Aires breed standard was written by Dr. Antonio Cabral and Dr. Felipe Morgado Romeiros and was accepted by the Portuguese Kennel Club, and the breed was recognised internationally in 1996 by the Fédération Cynologique Internationale. The breed has been exported to other countries, and has become a popular companion and pet in Europe. In the United States, the breed is recognised by the United Kennel Club in the Herding Group as of 2006, using the name Portuguese Sheepdog. It is also recognised and listed under its original name or various translations of the name by minor kennel clubs, specialty clubs, and internet dog registry businesses, and is promoted as a rare breed for those seeking a unique pet.

No health problems or claims of extraordinary health have been documented for this breed.