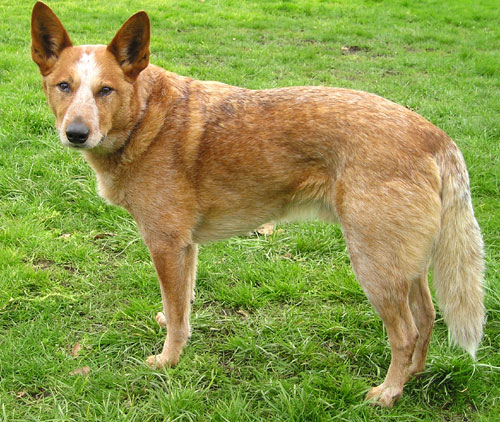 The Australian Cattle Dog, also known as the Queensland Heeler, Blue Heeler and Red Heeler is a breed of developed in for controlling . It is a medium-sized short-coated dog with a lot of energy, intelligence and an independent streak.

The Australian Cattle Dog should be muscular, athletic and substantial in appearance, without any trace of weakness or fragility. However, excessively heavy or cumbersome build is also undesirable as it limits agility, a necessity for any good cattle herder. Along with athleticism, symmetry and balance are also essential, and no individual part of the dog should be exaggerated or draw excessive attention. Even when bred for companion or show purposes, it should have well-conditioned, hard muscles.

Red is the genetically dominant colour in Australian Cattle Dogs and is comprised of a mix of red and white hairs leading to a ginger colouration. The mask of red cattle dogs is solid or nearly solid red. Any has patches on the body should be red also, with an ideal red dog having no blue or black markings whatsoever. However a strongly disfavoured marking occasionally appears wherein a red animal exhibits black 'saddles'.

The more common colour of the Cattle Dog is "blue", where the coat has a bluish appearance, caused by the mottling of black, gray and white hairs all over the dog's body. Blue dogs may have either blue coats with black spots or blue coats with black spots and some red markings. Acceptable red markings on blue dogs include ginger feet, ginger spots on the legs, and some of the ginger colour on the face and underparts. The ginger colouration should not extend up the face, or high above the legs; when it does it is called a "creeping tan." This is not accepted in the breed standard.

The coat of a cattle dog should show an even disposition of colour, save in the coat patterns of 'speckle' and 'mottle'. These two patterns show in dogs with both both red and blue coats and are less common than even coat colouration. A 'speckle' is a dark coat with a heavy mix of white speckles or small spots. A 'mottle' is a light or white coat with regularly-placed denser areas of dark colour showing up as spots. Both of these coat variations are considered unusual and uncommon, but acceptable, by breeders.

The mask is one of the most distinctive features of an Australian Cattle Dog. This mask consists of a blue-black patch over one or both eyes (for the blue coat colour) or a red patch over one or both eyes (for the red coat colour). The blue variety may also show some red on the face. Depending on whether one eye or both have a patch, these are called, respectively, "single (or 'half') mask" and "double (or 'full') mask". Australian Cattle Dogs without a mask are called "plain-faced" and may have small red "eyebrows". Any of these is correct according to the breed standard, and the only limitation is the owner's preference.

Most Australian Cattle Dogs have a stripe or spot of white hair in the center of the forehead, usually 1/2 inch to 1 inch by 2 inches to 3 inches (about 2 cm by 7 cm) called the "Bentley Mark". This is similar in appearance to the blaze or star markings sometimes found on s. This mark can be traced to a purebred dog owned by Thomas Bentley. According to legend, a popular dog owned by Tom Bentley passed on this distinctive mark to all Australian Cattle Dogs. They also frequently have a white tip to the tail and a small white patch on the chest.

Cattle Dog pups are born white (save for any solid coloured body or face markings) and grow darker as they mature. This characteristic is believed to be inherited from a posited Dalmatian ancestry. For dog owners whose interest is primarily in their qualification for s, even markings are preferred over uneven markings, and large solid-colour marks on the body are undesirable. For owners who are more interested in their dogs' performance in activities such as or , the breed's strong work ethic and intelligence are of more importance than the exact coat markings.

Docking Australian Cattle Dogs' tails is a practice peculiar to the United States, and is most often found in mixed- or pet-bred dogs. It is widely believed who the tails are docked because of the mistaken notion that the dog will get its tail caught in doors or mouths of irate livestock.Fact|date=October 2008

Like many s, Cattle Dogs have high energy levels and active minds. They need plenty of exercise and a job to do, so non-working dogs need to participate in , learning tricks, or other activities that engage their body and mind. Some individuals find repetitive training frustrating and dull, so owners should aim to make training sessions varied and more exciting in order to keep their dog interested. Cattle Dogs who do not receive the appropriate exercise and entertainment will invent their own, often destructive, activities. These dogs are, by nature, wary. They are naturally cautious, and grow more so as they age. Their cautious nature towards strangers makes them perfect guard dogs, when trained for this task.

Cattle Dogs drive cattle by nipping at their heels or tails, but they have also been known to herd other animals, such as ducks, chickens, humans, pigeons, and even cars without instruction when left to their own devices.

The Australian Cattle Dog is gregarious to other dogs with whom it is familiar, working well in combination with other Cattle Dogs, s, and s. Because of their plucky nature, the establishing of a pecking order can result in a few scuffles and bites.

It is important for an owner to quickly establish a hierarchy in which they are the dog's pack leader, otherwise the young Australian Cattle Dog may bond to a senior dog, rather than to its owner. If put in any situation where the dog feels threatened, and/or uncomfortable, it will usually resort to aggressiveness towards other, unknown dogs.

Based on a small sample of 11 deceased dogs, Australian Cattle Dogs have a median longevity of 11.7 years (maximum 15.9 yrs)

There is an anecdotal report of an Australian Cattle Dog (or a similar dog) named Bluey who lived 29.5 years, but the record is unverified

Based on a sample of 69 still-living dogs, the most common health issues noted by owners were musculoskeletal (spondylosis, elbow dysplasia, and arthritis) and reproductive (pyometra, infertility, and false pregnancy), and blindness.

The dog is strong and muscular, yet compact and symmetrical, with the ability and willingness to carry out any task — no matter how enduring or hard.

Australian Cattle Dogs are expert Frisbee catchers and with just a little work they can master this activity and enjoy it for a lifetime.

The precise origins of the Australian Cattle Dog are not known, but they appear to have been a distinct breed as early as 1897. It began when Smithfields were originally used in Australia for herding cattle. They were noisy and bit too hard, so they were bred with the , a wild dog prevalent in Australia. The resulting crosses were known as “Timmins Biters,” which were quieter, but still bit hard.

A primitive stage of Collie unlike that of today's and , used for herding sheep, were then bred to the Dingo. In 1840, Thomas Hall bred a couple of Blue Smooth Highland Collies with dingoes and got the “Hall’s Heeler.” Then, in the 1870’s Fred Davis bred some into them to make the dogs more aggressive. These were relatively common as sporting and guard dogs in the late 19th and early 20th century.

The resulting Cattle Dog was of a slightly heavier and more muscular build than the Border Collie and of less temperamental nature, with good herding ability, the stamina to withstand extremes of temperature and the resourcefulness to forage and to feed itself on an omnivorous diet like a wild dog. Physically the Heeler has inherited a big broad head and strong jaws from the Bull Terrier. From the Dingo comes the distinctive sandy colour of the legs and rather large pricked ears.

Like the , the Australian Cattle Dog is fearless with cattle and has a tendency to nip their heels to keep them moving when herding. This trait is undesirable when the dog applies it to humans and horses. It is rumoured that in order to create a breed that had a strong natural affiliation with horses, the Cattle Dog was crossed with the , which although not a working dog, was popular during the 19th and early 20th century as a carriage dog, running beside the horses. As a result of Dalmatian being introduced Australian Cattle Dog pups are born all white and rarely some adult dogs will have floppy ears, although undesirable it is purely superficial and won't affect their abilities.

It was thought that the breeding with the Dalmatian led to the spotted colouration in some Blue Heelers, though this is considered undesirable and is most commonly seen in mixed breed dogs that have Australian Cattle Dog in their ancestry. For many years "Blue Heelers" commonly had large black patches on the body, as well as the Collie's mask. It was also common for them to have ears that lay back against the head like some Collies. The flat ears are now considered undesirable for conformation showing.