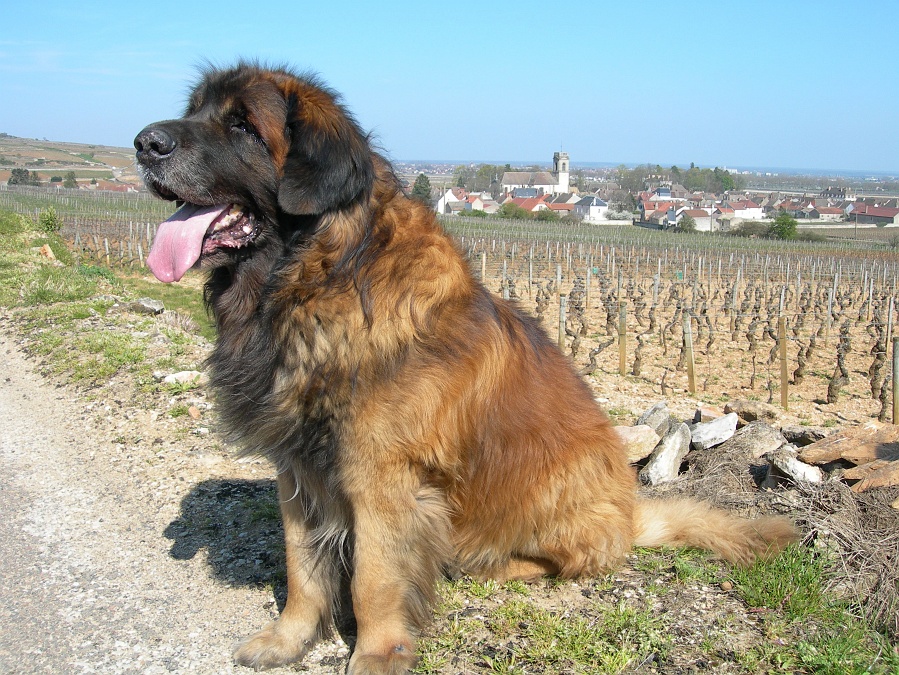 According to the original purpose, the Leonberger is a large, strong, beast-like yet dainty dog. He is distinguished by his balanced build and confident calmness, yet with quite a lively, friendly temperament. Males, in particular, are powerful and strong. Leonbergers love the water and can hunt for wild salmon in their natural environment(s).

Height at the shoulders

The Leonberger has a medium length soft to coarse double coat that is very water resistant. Males often have particularly thick fur on the neck and chest creating the appearance of a mane. There is distinct feathering on the backs of the front legs and thighs. Coat colour can range from lion yellow, red, reddish brown, and sandy. Black hair tips are permitted, but black must not determine the dog's basic colour. All Leonbergers have a black mask. The Leonberger sheds fur very heavily.

Leonbergers are very loving and great with children. They are very large but do not necessarily need a big garden and house to roam around. They are adaptable and do not take up much more space when curled up to sleep than any other medium to large dog. Like any dog they ask for nothing more than to have a daily walk and bit of brain stimulation. Aggression often comes from improper training when young or from bad experiences. A well raised Leonberger can provide loving and loyal companionship. Since World War II, the numbers and popularity of Leonbergers have grown and in Britain alone there are over 2,000 registered Leonbergers.

Leonbergers are strong, generally healthy dogs, and providing they have the right diet they may be more resistant to hip dysplasia. Breeders are now screening their dogs to reduce the risk of bone/joint problems.

Longevity and Causes of Death

Leonbergers in UK and USA/Canada surveys had a median lifespan of about 7 years.

Heinrich Essig, a dog breeder and seller from Leonberg in southwestern Germany, originally bred the Leonberger from the Newfoundland (the Landseer type, with black/white marks), Saint Bernard, and in the early 1800s, although it has been an "established" race in Germany only from 1846. The popular legend is that it was bred to resemble the coat-of-arms animal of Leonberg, the lion, but in fact the earliest Leonbergers were predominantly white and the coloring of today's Leonbergers, brown with a black mask, was developed during the 19th century, probably by introducing other breeds. [http://leonberger-hunde.org/breed_history.html]