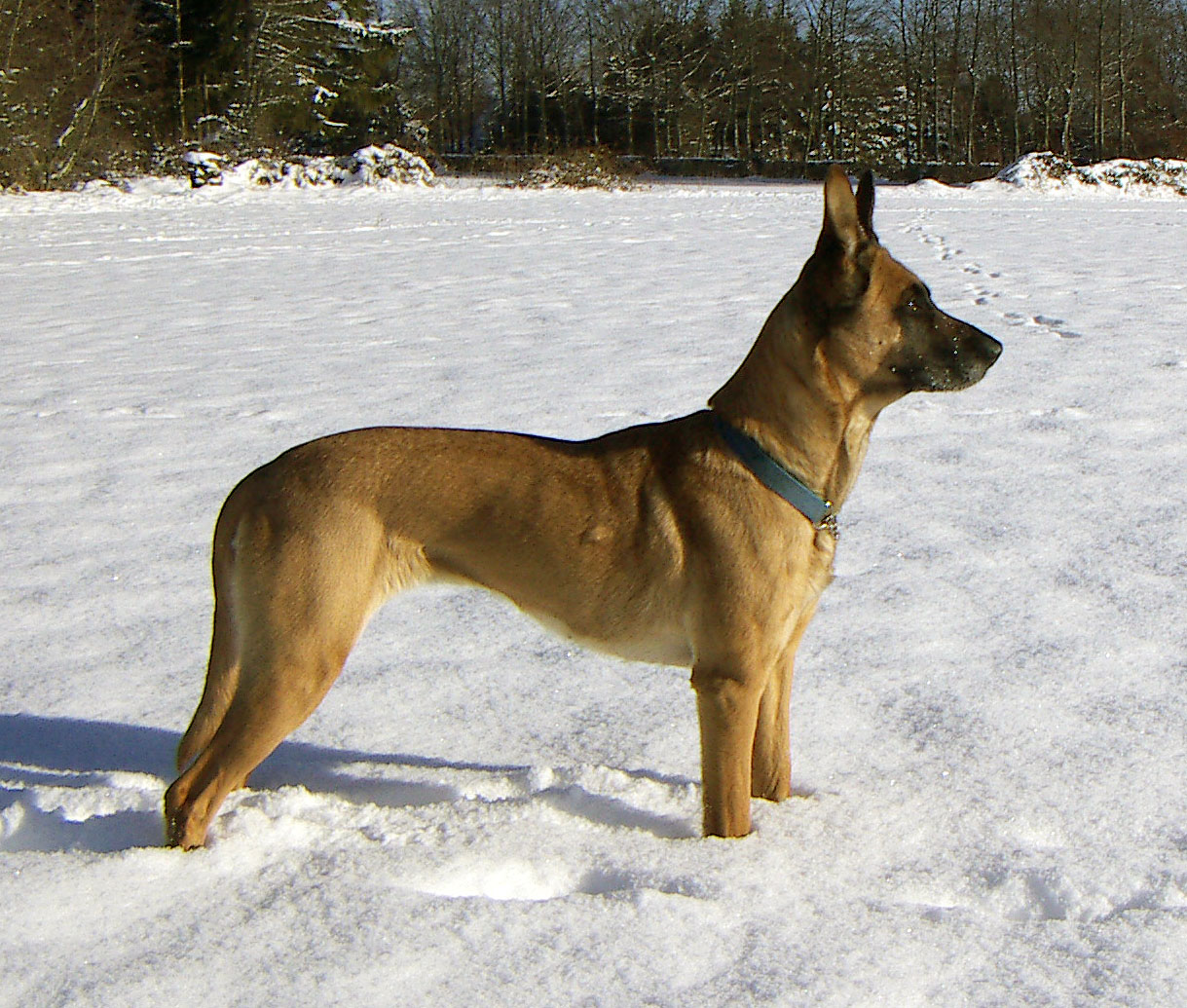 The Belgian Shepherd Dog (Malinois) (pronEng|ˈmælɪnwɑː) is a breed of , sometimes classified as a variety of the rather than as a separate breed. The Malinois is recognized in the under the name Belgian Malinois. Its name is the French word for Mechlinian, which is in Dutch either 'Mechelse' (from ) or 'Mechelaar' (one from ).

Like all Belgian Shepherds, the Malinois is a medium-sized, hard-working, square-proportioned dog in the family. The Malinois is recognized by its short brownish yellow coat and its black ears that stick straight up, cheeks, and muzzle. It very much resembles a smaller German Shepherd.

Due to their history as a working dog (i.e. being bred for function over form) Malinois can vary greatly in appearance. The acceptable colors of pure-bred Malinois are a base color of grey to fawn to mahogany with a black mask and ears, and with some degree of black tipping on the hairs, giving an overlay appearance. The color tends to be lighter with less black agouti or overlay on the dog's underside, breeching, and inside the legs.

The other varieties of Belgian Shepherd are distinguished by their coat & color: the Tervuren is the same color as the Malinois with long hair, the Laekenois is the same color, only it may lack the black mask & ears, and has wirehair, the Groenendael (registered as Belgian Sheepdog by the American Kennel Club) has long hair and is solid black. There are (occasionally and historically) solid black, black-and-tan (as in a Doberman or as in a ), or other colored short-haired Belgian Shepherds, but these are not technically Malinois.If a dog represented as a Malinios is brindle (clear stripes of different colored hair) it is probably a or a mixed breed, although the possibility exists that it is a "throwback" to a common continental shepherd ancestor.

In Belgium, Germany, the Netherlands and other European countries, as well as in the United States, the Malinois is bred primarily as a for personal protection, detection, police work, search and rescue, and sport work (, , , ). The exclusively uses the breed. [http://clinton4.nara.gov/WH/kids/inside/html/spring98-3.html] [http://www.gopetsamerica.com/belgian-malinois/belgian-malinois.aspx] [http://books.google.com/books?id=KMysiHydkQ0C&pg=PA189&lpg=PA189&dq=secret+service+malinois&source=web&ots=6uBwYPgDEK&sig=o-_F7YRefOk91aQ2U05RzjT8dsc#PPA191,M1]

The dog is also used extensively by of the . Oketz favors the more slight build of the Malinois to the German Shepherd and , which were employed formerly.

The lifespan of the Belgian Malinois is 10-14 years, and there are a number of health problems and disorders that are associated with the breed. This includes cataracts, epilepsy, thyroid problems, PRA, HD, and pannus.

Books about the Breed