The Central Asian Ovtcharka (pronounced /ɒvˈtʃɑrkə/; Russian: среднеазиатская овчарка [srʲɪdnʲɪazʲɪˈatskəjə əfˈtʃarkə]) is recognized by FCI, as a Molossoid type dog breed of Russian origin.[1] Most breed representatives reside in Russia, and local kennel club officials refer to Central Asians as one of the most popular dog breeds in the country, often rating it as the #1 breed.[2]

Central Asians most likely originated in a geographical area between the Ural, Caspian Sea, Asia Minor, and the Northwest border of China.[3] Aboriginal Central Asians as well as mixes still can be found in its countries of origin, such as Kyrgyzstan, Tadzhikistan, Turkmenistan, Kazakhstan, Afghanistan, Uzbekistan and surrounding countries.[4] Some serve as livestock guardians, some protect their owners, and some are used for dog fighting, which is a national tradition in many countries of that region.

Russian biologists and scientists have studied the local dog population[5] since the 18th century. After the Communist revolution, the Soviet government focused on working dog breeds for the Red Army, and imported the best breed representatives to Russia as per military dogs' and guard dogs' requirements. Over the decades, this practice harmed the local population. The introduction of new breeds to the region led to crossbreeding. Eventually, purebred dogs only remained with herders, breed enthusiasts and farms, with a surfeit of crosses elsewhere.[6] However, the Central Asian Shepherd Dog population is still stable in general, reproducing some true quality dogs praised for working abilities, regardless of country of origin. Trading bloodlines and purchasing unrelated breeding stock between Russia, other "former USSR republics" (such as Ukraine, Belarus etc. ) and countries where CAO still at aboriginal stage is a common practice nowadays. 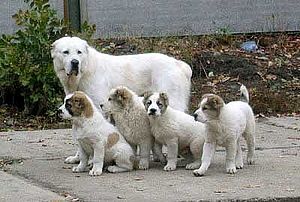 For working qualities, modern Central Asians have been bred into different directions, depending on the demand for specific abilities. Traditional dog fights had always been a national tradition in places of original habitat, but they had never been cruel and destructive as pitbull-type fights. All herders from the same area annually met together, and fought their strongest sheep guardian male dogs to pick the winner. It was about dominance rather than destroying their own kind. Most dogs evaluated each other when met at the field and the weaker or more submissive dog left, taking the loss. Dogs seldom injured each other, inflicting mostly minor scratches within a short period of time. Only true leaders actually had to determine the strongest dog via a real fight; but this was minor, compared to their everyday duties, facing predators and venomous snakes.[8]

They are the most powerful dogs of livestock guardian type dogs, not too much, but slightly more powerful than Caucasian Shepherd, Kangal, Akbash etc. Modern commercial dog fights often differ from traditional as much as livestock guardian dogs differ from fighting dogs. There are different rules, and different breeds involved. Most Central Asians used for modern commercial fights come from fighting lines. The majority of breeders are aware of their dogs’ backgrounds, and will tell whether the dog comes from lines used for fighting. One can always expect a high level of aggression toward other dogs from CAOs with a dog fighting background. It is always important to distinguish whether a dog will display aggression only toward strange, unfriendly dogs entering their territory, while establishing and maintaining the usual social relationships with other animals on the premises; or will attack regardless of whether the other dog is a member of the same social group. Promiscuity in aggression toward strangers and friends is highly atypical for the breed.

Central Asians are still in demand as livestock guardians, though not nearly as much as they used to be. These dogs, to differing degrees, are protective against human intruders; they are very territorial, safe with children; they love and respect elderly people, protect all small animals from predators, and are very gentle with family members.[9]

Dogs for personal protection or working dogs originated from livestock guardian dogs, selectively bred by Russian breed experts for working abilities. As a result, they excel in obedience, territory protection, and personal protection, and are very intelligent. As such, they make perfect house dogs.[10] They do not need any complicated training to learn basic house rules, and treat the owner with the same great respect with which their ancestors treated the herder. These dogs were introduced to the worldwide sheep breeding community with great success. Guard dogs must be able to work as a team to protect sheep against predators; thus excessively aggressive CAOs, as with any other dogs, cannot be members of the pack, and will not pass this simple test for compliance with the breed origination purpose.

Central Asian Shepherd dogs can come from working lines, fighting lines, and livestock guardian lines, and behave accordingly, regardless of the country they come from. Simple pedigree research and conversation with the breeder will reveal what basic instincts one can expect from the dog. Central Asians from pure show lines are very rare, because most registries require working tests prior to breeding.[11]

Selected for centuries for their abilities to destroy predators, and praised for their power and stamina, Central Asians sometimes are called "Volkodav", "The Wolf Crusher" in Russian. It is very important to select only stable dogs for breeding purposes, and avoid starting protection training of dogs of this breed at early age.

The breed presents a robust dog of greater than average size with great strength and power. They are independent, curious and alert, yet imperturbable. The dog is as long as it is tall at the withers, or slightly longer than its height. The hair is short or moderately long with a heavy undercoat. Its ears are, in practice, cropped very short, and the tail is docked moderately long (except for dogs from countries where cosmetic surgeries for dogs are illegal). Most common colors are black/white; fawn of different shades, from almost white to deep red; brindle. Some have a black mask. The head is very solid, without pronounced stop or sculls. The neck is low set, short, with dewlap. The body is fairly broad, proportionate, muscles rather flat. The ribcage appears very long because of developed false ribs. The legs are straight, with heavy boning and moderate yet defined angulation. Leg bones must be in proportion, and shall never give the impression that any bone is short. The rump is broad. The typical gait is a gallop; however CAO can trot for hours without wearing themselves out.[12]

The Central Asian Shepherd Dog is a protective dog who bonds first to its human caretaker and next with its perceived possessions. Bred to solve problems, it is independent minded, strong, brave and responsible. It is a large but agile dog, sometimes described as a cat in dog's clothing. With its strong guarding and territorial instincts, it is not a breed for the novice owner.

Sensitive and smart, the Central Asian Shepherd responds best to someone who can inspire loyalty while also providing strong leadership. Heavy-handed training will backfire with this breed; but respectful, thoughtful training will yield an undyingly devoted companion.

The large Central Asian Shepherd Dog may spend a considerable amount of time moving around in its native lands, and this kind of slow but steady exercise is what it likes best. With a job to do and a piece of property to protect, it will find the highest spot and keep an eye on all that happens.

Neither the longhaired nor shorthaired coat require a lot of grooming, but the thick undercoat results in steady shedding, which can be helped with regular brushing.

The Central Asian is a working breed of dog, and different breed fanciers organizations issue sets or rules and recommendations important to preserve dogs’ abilities to perform certain duties. This includes special tests to determine a dog’s inborn qualities, and training degrees or titles aimed to show what the dog can learn to do.

The National Breed Club in Russia developed a temperament test to reveal a dog’s willingness and ability to protect the premises, as well as titles in Obedience (such as OKD), and in Protection (such as ZKS or KS) for dogs in most pedigrees from Russia and other countries of that region. There are several other types of tests and training titles, from simple to extremely complicated.

Breed Clubs in European countries seldom have requirements, while common dog sports such as Schutzhund or IPO are not perfectly suitable for a Livestock Guardian dog. Some European Union Countries developed special tests for large breeds of dogs aiming to reveal a dog’s overall stability, such as The Mentality Assessment test in Sweden.

Common tests in the USA are Canine Good Citizen by AKC, and the ATTS Temperament Test by American Temperament Testing Society. Both tests aim primarily to reveal temperament stability. ATTS is more important for working dogs, as it also rates the dog’s reactions needed for protection.

Fight tests are common in countries where the breed is still in aboriginal stage, or in the process of formation. Despite adverse reputation of commercial dog fights, fight tests are aimed to reveal a dog’s willingness and ability to fight predators. In countries with highly developed open field sheepherding, major livestock herd losses may be caused by predation from feral dogs and wolf-dog hybrids, and the livestock guardian dogs must be able to protect the sheep from those. The fight tests were established to maintain this important breed trait. However, it is important to notice lots of fight tests are done in the name of breeding, when they actually are nothing but dog fighting included money and criminal interests.

And, finally, the real life test for the Central Asian is simply to be a farm dog, or herd protection dog, in any country. Information on Livestock Guardian dogs behavior and specifics can be found at Livestock Guardian Dog Association.

Aziat is a versatile, universal breed, and fits under different descriptions at a time, what is a reason for different Kennel Clubs to classify Central Asians under different dog breed groups. Russian Kennel Club classified Central Asians as a working dog breed, reflecting tremendous results in obedience, protection and military-related training. Modern breeding requirements by leading Kennel Club in Russia include mandatory temperament test and training title, besides show rating. UKC fit them together with other Flock Guardians of similar breeds, matching breed’ natural sheep guarding abilities, proven by breeders and farmers in USA. FCI classified them as Molossoid dogs, sometimes described in different languages as Moloss or Molosser type dogs, likewise, reflecting the match by confirmation and common ancestry between CAO and related breeds.