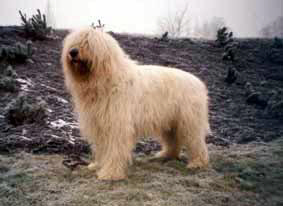 A South Russian Ovcharka, also known as a South Russian Sheepdog, is a large, long-haired (12 centimeters), white . Breeders have not yet developed a precise theory of the dog's origins. However, it is agreed that its ancestors lived in the region between the and the . About 26 inches tall it has a long head, with dangling, small, triangular ears. Its coat constists of long, usually white (although sometimes white with yellow, or with shades of grey), thick coarse hair, that is bushy and slightly wavy.An undemanding dog, it can adapt to any weather conditions.

The South Russian Ovcharka is Robust, lean, with massive bone structure and strongly developed musculature. The Coat is long 4-6 inches (10-15 cm), coarse, thick, dense of equal length on head, chest, legs and tail, with a well developed undercoat. The coat colors are most often white but also white and yellow, straw color, grayish (ashen gray) and other shades of gray; white lightly marked with gray, gray speckled. The head is longated shape with a moderately broad forehead; the occipital crest and the zeugmatic arches are strongly pronounced. The stop is barely visible. The nose is big and black. The ears are relatively small, of triangular shape, hanging. The eyes are oval shape, set horizontally, dark; the eyelids lean, tight. The teeth are white, big, fitting closely. The incisors are set regularly and close in scissor bite. The neck is lean, muscular, of moderate length, set high. The chest is reasonably broad, slightly flattened, deep. The belly is moderately tucked up. The Loin is short, broad, rounded. The withers are apparent but not high. Back straight and strong. The tail is falling at rest, reaching the hock, with the end curved upward. The front legs are straight, parallel, relatively long. The angle formed by the shoulder bone and upper arm bone is about 100 degrees. Pasterns are strong, wide and long, with a slight slant. Hindquarters are powerful, wide set, parallel. Well-angulated. The upper thighs are well-muscled. Stifle bones are long, inclined. Hock joint is clean-cut, angular. The hock is strong, long, slightly inclined. The feet are oval shaped, strong, well arched, covered with long hair.

The South Russian Ovcharka is not for everyone. This very large breed can be dominant, wary of strangers, and is very lively making him difficult to care for. It is a great guardian breed however and would do well guarding cattle or flocks of sheep.The South Russian Ovcharka is a dog of robust constitution, of above average size; it is fierce and distrustful of strangers, not very demanding and can adapt easily to diverse climatic conditions and temperatures. This is most evident according to its sex. The males are more dominant, stronger and larger than the females. They are usually highly nervous when engaging in sports activities; strong, balanced and are also very lively. They have a dominant reaction: active way of defense. As guardians they extend themselves to include their families, their home and as much land as they can scent fully call their own. The possessive nature of this dog requires extensive property, a sizable family, and preferably other animals that it can protect. It has a dominating personality and can enforce its will upon other dogs with ease. This breed needs an owner who knows how to display strong leadership. It socializes best while still young.

The South Russian Ovcharka requires firm and consistent training as he can be very independent and can have a short attention span. Given a dominant trainer/handler, this breed can do exceptionally well

The coat of this breed requires daily brushing down to the undercoat, accepting grooming from puppyhood. As this breed is very active, his coat has the tendency to become matted quickly. Around the mouth should be cleaned daily. The coat plays an important role, protecting the dog against cold and warmth. It is "self cleaning". Even when the weather is dirty and rainy, the coats will be bright white when dried. It is possible to spin and knit the hair. It used to be done in Imperial Russia, and the knitting was used as a form medical treatment of rheumatism.

South Russian Ovcharkas can become quite old. The age of 10 till 12 years is not an exception. In general they are healthy dogs.

and kinologists have different versions about the South Russian Ovcharka's origin. Some believe, South Russian Ovcharka is developed from pra-slavics - arias dogs. Those resided at South Russian Ovcharka place of origin at 4 millennium BC and used the original pre-historic bearded (“broudasti” in Russian) dogs as herd dogs and . Those were described by L. P Sabaneev as 'Russian Shepherd' or 'Russian wolf-killers'. As arias moved west and north, and those tribes were named Slavic; the bearded dogs were referred as Russian Shepherds. Dogs were kept in quantity by Russian . This is a Russian Native Breed, completely developed by 1790.

By another version, South Russian Ovcharkas originated from European s of the same hair type known as Austrian Shepherd. South Russian Ovcharka and European herding dogs of similar hair type look alike and have the same ancestors. Several herding dogs with long, woolly hair were imported to Russia from Europe. In Russian Imperial Law Books (XXVI volume, 1830) mentioned a special breed of dogs imported at 1797 from Spain with sheep. Those dogs were used for both herding and protection against predators, highly praised for their abilities. Law books recommended to breed these dogs. Russian scientists specializing at southern steppes before 1797, wrote that local sheep herds are protected by wolf-looking dogs and hounds.

Small Austrian shepherds were not suitable for Russian steppes. Sizable territory and natural merino sheep's instinct, keeping the herd together, excluded the need for small herding dogs. There only was the great need to protect from predators. So Austrians were crossbred with “tatar” shepherds (similar to Caucasian) and sight hounds, the most common breed in the Crimea area at that time. Offspring selected were large, aggressive, hardy.

So, arguments about the South Russian Ovcharka's ancestry are endless. However, there are facts nobody can argue with. SRO definitely have wolf as the direct ancestor. A South Russian Ovcharka skull is built almost identical to wolf’s with only slight differences, what could be explained by domestication.

Starting in 1797, there were flock of sheep sold from Spain to Russia. These sheep had to be brought to the steppe so they were driven over land, all the way on foot; sometimes up to 2500 or 8000 sheep. Transports like these could take two years and were accompanied by shaggy haired sheepdogs. Once the sheep arrived in Russia most of them were brought to Askania Nova, a large area in the Crimea. The small sheepdogs were crossed with local dogs such as the Tartar (Caucasian) Ovcharka, the Crimean Greyhound and the Hungarian Komondor, because there was a strong need for larger dogs which were suitable to guard and protect the herds against wolves and other predators. The ability to drive sheep wasn't as relevant anymore.

Askania Nova was the largest and best-known "sheep colony" in Russia. For a long time the breeding of SRO was in the hands of the Falz-Fein family that owned Askania Nova. By 1850 the SRO was already settled and widespread. Records show about 2000 Ovcharkas, permanently working, with 4 or 5 dogs for every 1000 sheep.

In the 1870's the South Russian Ovcharka reached its greatest numbers, after which a decline set in, due to steppe reclamation for agriculture, growing grains etc. And with a rather fast decline in the number of wolves, the need for dogs also reduced. When the Russian Revolution took place, Askania Nova was almost completely plundered and destroyed. Most of the dogs were killed or stolen, and many were shot because they did not accept new masters. Thanks to the famous biologist Prof. A. Brauner the SRO still exists. When he came to Askania Nova in 1923 he only found a few young Ovcharkas. With the help of military kennels, shepherds and other enthusiasts he collected them. In 1928, after the foundation of a state breeding center in Dzhankoi (Crimea), a successful resurrection of the breed took place. The number of dogs increased and they even found their way to other cities like Moscow. In 1930 there were some official Russian entries at a German dog show and in 1939 there was a special breed exhibition in Simferopol.