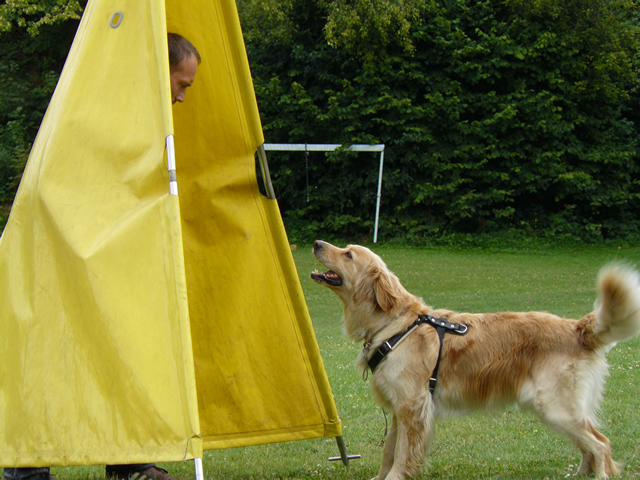 The Hovawart is a German . The name of the breed means "an estate guard dog," which is the original use for the breed. The breed originated in the region and was first described in text and paintings in medieval times.

The Hovawart is an outstanding watch dog and somewhat reserved towards strangers. They make excellent family dogs as they are totally devoted to their family. They are a working dog breed, and require a consistent and loving yet strict training and meaningful activity throughout their lives.

One of the first documented recordings comes from the year 1210 when the German castle was besieged by Slavic invaders. The castle fell and its inhabitants including the Lord were slaughtered, however the Lord's infant son was saved by one of the castle's Hovawarts. In spite of being wounded itself, the dog dragged the tiny child to a neighbouring castle and thus saved the boy's life. This young boy, , grew up to become a legendary figure in the history of German law. He later published the , the oldest Code of Law to survive from medieval Germany. Not surprisingly, the Hovawart is mentioned with praise. The , a law text published in 1274 and based on Eike von Repkow's Sachsenspiegel, lists the Hovawart among the dogs you have to replace and pay for if they are killed or stolen.

By 1473, described the Hovawart as one of "The Five Noble Breeds" and among its uses listed that it was useful for tracking the robber and miscreant. This along with references to the Hovawart in German law show that it was a readily identifiable breed and held in similar esteem to that of hunting dogs.

Following the medieval period, the popularity of the Hovawart began to decline. Newer breeds such as the slowly replaced the Hovawart as a guard and working dog until it had almost disappeared by the beginning of the twentieth century. Around 1915 a group of enthusiasts decided to try and save the breed. Predominant in this group was the "." They started by looking for dogs in the farms of the region. König then started a careful breeding program using these dogs and crossed them with ok, Newfoundlands, German Shepherds, s, a and an . After much work the group was rewarded in 1922 when the first Hovawart litter was entered into the German Breeding Registry. The enthusiasts continued their work and in 1937 the officially recognised the Hovawart. All this work was almost undone with the outbreak of the . Because of their abilities many Hovawarts were used in the German war effort and perished. By 1945 only a few remained. Enthusiasm for the breed remained and in , and some fellow enthusiasts in formed a new club, the "Rassezuchtverein für Hovawart-Hunde Coburg" which is still in existence today. In 1964 the German Kennel Club recognised the Hovawart as the country's seventh working breed and around this time enthusiasm for the breed started to develop in other countries.

The Hovawart does exceptionally well in , tracking and working dog activities. The females are generally lighter in build and often love agility. In training and especially obedience work the trainer must keep positive reinforcement in mind all the time, as the Hovawart is not as eager to please as many other working dog breeds. It is important to realize that the Hovawart works "with" you and not "for" you. They do have the ability to think and act independently. Their guarding instinct for example does not require any real training, it is inherent, its what they were bred for. The Hovawart may easily become reluctant if training is built only on punishments.

The owner of a Hovawart should ideally have previous experience in owning and training a dog and as such the Hovawart is not usually suitable as a first dog.