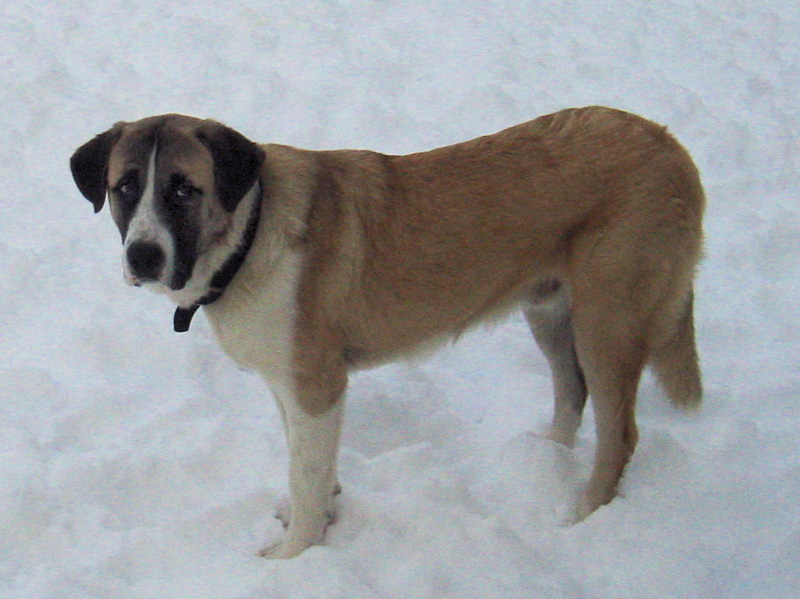 The Rafeiro is a very large dog, averaging 47.5 kgs (104.5 lbs) and 73 cms (28.7 ins) at the . [ [http://www.fci.be/uploaded_files/096gb2002_en.doc Fédération Cynologique Internationale Breed Standard] ] The head is described as bear-like. Eyes should be dark, never yellow. The ears are set medium high and fold downwards. The dog has a deep chest, and should have a general aspect of length (not "whippety", the standard says.)

The fur is short to medium, the same length all over, and can be black, yellow, and fawn (a light brown colour) with white markings, or white with other colours. The coat can be streaked or brindled or dappled.

The breed standard describes the breed as "sober" (meaning "marked by seriousness, gravity, or solemnity of conduct" [The American Heritage Dictionary of the English Language, Fourth Edition] ), his movement as slow and rolling, and as having a calm expression. Individual dogs may vary in behaviour and temperament, and puppies must be well socialized.

As with all very large dogs, they are not the dogs for beginners. Dogs of this size and type have the potential to be a danger to others if not well socialized at an early age, and are recommended only for the experienced dog handler who has the time to socialize and train the dog. They mature slowly, are very independent, and often do not respond to traditional force methods of dog . They are extremely territorial and will protect the sheep, households, and families they feel were placed under their protection. They are not aggressive but protective and are said to get along quite well with children.

Rafeiro do Alentejo are of the very ancient type that migrated with humans from Central Asia. When the dogs arrived in the Iberian Penninsula is not known; they may have come with nomads sometime in prehistory, or have been brought by the Romans when they ruled the area thousands of years ago. It is often supposed that the breed is related to the , but no proof of this exists. Perhaps in the future, DNA evidence will prove when the dogs arrived and what their ancestry is, but for now there is no proof, only legends, guesswork, and speculation.

What is known is that this breed and the ancient types from which it descended have been used to move sheep from mountains in northern Portugal to the plateau of Alentejo and back to the mountain. Due to changes in agriculture and livestock raising, and the elimination of large predators, the breed ceased to have economic use and began to decline. Fanciers, however, have been able to keep the breed alive, although, in Portugal, it is still considered "vulnerable". [ [http://rafeirodoalentejo.net/main.htm Associação Dos Criadores Do Rafeiro Do Alentejo, official breed club for the Rafeiro do Alentejo in Portugal (in Portugese)] Less than 5,000 females is considered vulnerable, the estimate is 1700 Rafeiro do Alentejo in 2002.] Today the Rafeiro do Alentejo is most often kept as a companion and .

The Rafeiro do Alentejo (Alentejo Mastiff) is recognised by the in Group 2, Section 2.2 Mastiffs, Mountain Type, Portugal (breed number 96). Other Portuguese breeds in Section 2.2 include the (number 173) and the , number 150. [ [http://www.fci.be/nomenclatures_detail.asp?lang=en&file=group2#section2 Fédération Cynologique Internationale Group 2, Section 2.2] ] The "Associação Dos Criadores Do Rafeiro Do Alentejo" is the official breed club for the Rafeiro do Alentejo in Portugal. [ [http://www.cpc.pt/?clubes/filiados Affiliated Clubs page of the Clube Português De Canicultura] ] Rafeiro do Alentejo are now included in the of the (as the Rafeiro do Alentejo) and fully recognised by the in the United States, in the (as the Alentejo Mastiff). It may also be sold by commercial breeders under the Rafeiro do Alentejo name or any of the various translations and English versions of the name, with registration by minor kennel clubs that require little to no breed verification for registration, or listed by internet-based dog registry businesses where it is promoted as a rare breed for those seeking a unique pet.

Little data exists for health problems in this breed. However, when bred to be very oversize, they may be subject to hip displaysia, and dogs with deep chests sometimes suffer from bloat. [ [http://www.scamperingpaws.com/health/dogbreeds.shtml Dog Breeds and Their Health Problems] ]

* [http://rafeirodoalentejo.net/origem.htm Origins of the Rafeiro do Alentejo (in Portugese)]
* [http://www.ambienteinsular.uac.pt/arquivo/abril2004/artigos3.htm Mitochondrial diversity of strains of Four Dog Breeds (in Portugese) Biology Department, Univerity of the Azores, retrieved 3 Oct 2008]