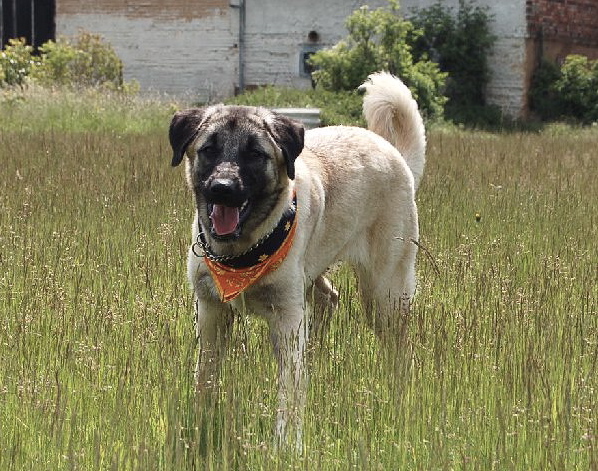 image_caption =
name = Kangal Dog
note = Still primarily found in Turkey, with some enthusiasts in Europe, Africa and North America.
ukcgroup = Guardian Dogs
ukcstd = http://www.ukcdogs.com/breeds/guardiandogs/kangaldog.std.shtml The Sivas Kangal Dog is a breed of (" lupus familiaris"), and is the national breed of . This dog, which can grow as large as 120 pounds (64 kg), was originally used as a . It is of an early type with a solid, pale tan or sabled coat, and with a black mask; indeed, another name for the breed is "Karabash" which translates into "black head".

The breed is often referred to as a , but it does not herd its charges. Instead, it is developed to live with the flock and act as a , fending off wolves, bears and jackals. The Kangal Dog's protectiveness and gentleness with small children and animals has led to its growing popularity as a guardian for families as well, as it watches members of its flock with extreme devotion.

Adult males stand about 28 inches (75 cm) high at the shoulders and weigh about 120 lb (60 kg). females are usually significantly smaller and less heavy in build.

The color and coat are perhaps the most visible traits that distinguish the Kangal from the Akbash and Anatolian. The coat must be short and dense, not long or feathery, and of a pale fawn or tan color with varying amounts of sable guard hairs. All Kangal Dogs have a black facial mask, and black or shaded ears. White at certain points (chest, chin, toes) may or may not be allowed, depending on the standard. Some heavily sabled Kangals also have darker legs and chests. Most importantly, the coat should not be broken, brindled, or spotted.

Some working Kangals may have their ears cropped at the age of a few weeks by shepherds. This is done for appearance and for protection, as long ears can be vulnerable in a physical confrontation with a predator.

The ideal Kangal dogs should be calm, controlled, independent, and protective. They may be aloof towards strangers, but a well-socialized Kangal Dog is friendly with visitors and especially children. They must never be shy or vicious. A well-trained Kangal is sensitive and alert to changing situations, responding to threats with judicious warnings and courageous action if necessary. They make good guardians of livestock and humans alike, but they may not be suitable for inexperienced dog owners, as the independent intelligence of the Kangal makes for a difficult pupil.

A working Kangal on duty will station itself on a high vantage point overlooking its flock. On hot days, the dog will dig itself a hollow in the ground to keep cool. Novices learn by staying close to older dogs. The dogs will work in pairs or teams depending on the size of the flock, taking up positions around the sheep and changing position. The intensity of their patrols around the sheep increases at nightfall.

When suspicious, a Kangal will stand with its tail and ears erect and give an alarm call, inciting the sheep to gather around it for protection. The Kangal’s first instinct is to place itself between the perceived threat and the sheep or master. Once the sheep are safely behind it, the Kangal confronts the intruder. When faced with a , the Kangal usually need do no more than intimidate it into retreating, though it will resort to a physical confrontation if the predator stands its ground.

Inside Turkey, the Kangal dog is an object of pride even for urban Turks, and has been declared a "National Cultural and Historic Treasure" by the Turkish government. Outside Turkey, the Kangal dog's status as a separate breed is disclaimed by fanciers of the Anatolian Shepherd Dog. Anatolian breeders point out that Turkish sheepdogs come in a variety of colors and coat lengths, and claim that all of these dogs constitute a single breed that subsumes the Kangal Dogs and Akbash dogs. Kangal and Akbash defenders point out that these breeds were developed in isolated regions where sheep herding was most intensive, and became distinct from the generic sheepdogs scattered elsewhere in the country. There are no breeders of "Anatolian shepherds" in Turkey; nor is the generic çoban köpeği (lit. shepherd dog) considered to be a breed. It is possible to find karabash-colored dogs being bred throughout Turkey; some are Kangals, many are crossbreeds. Crossbreeding and mongrelization are increasing as Turkey continues to urbanize, and this has led to increased local efforts to preserve the indigenous Kangal and Akbash breeds.

Kangal dog breeders feel that the standard they have laid out for the breed reflects the working dogs of the Kangal region, and mixing Kangal Dogs with other Turkish dogs undermines the preservation of the breed, as well as introducing unwanted temperament traits. They point to the preference for Kangal breeding stock and "Karabash" color by Anatolian breeders in recent years as a tacit admission of the value of the Kangal breed.

In general, the controversy about breed status comes from outside Turkey; Turks remain committed to their national breed, and are perplexed by the claims by western canine groups that Kangal Dogs are "the same" as all other "çoban köpeği" in Turkey.

The arguments boil down to whether the Turkish villagers, university researchers, and government are valid in their description and assessment of their native dog breeds, or whether western dog clubs should be the arbiter of what is and is not a breed in Turkey. Increased internet access and education in Turkey has led to a strong movement to preserve the native breeds, and to establish recognition for Kangal and Akbash dogs with international registries such as the FCI. It is likely that the arguments will be settled by the Turks themselves, along with compelling evidence that is emerging from DNA studies in Turkey and Finland.

Sculptures of dogs resembling the Kangals of modern-day Turkey, are seen accompanying the hunting parties of the n King . mentions a large, powerful breed described as "Indian Hound" kept by the .

Although it seems likely that there is common ground between the ancient Turkish dogs and those from neighbouring countries of the Middle East, current thinking tends to favour the theory that the anscestors of the Kangal migrated from due to lack of evidence in modern-day and of any cousins resembling the Kangal.

It is assumed in Turkey that the Kangal dog accompanied the , fleeing from as working dogs on their long journey from Central Asia to Anatolia in the . Dogs similar to the Turkish shepherd dogs can be found in rural communities along this historic route.

The earliest reliable account of Turkish shepherd dogs comes from . In his Seyahatname (Book of Travels) he describes the ceremonial parades of the , an elite Ottoman force, in which guarding-dogs were displayed in full regalia by their keepers.

The Kangal in Turkey

A contemporary national treasure in Turkey, the Kangal dog is one of over 30 livestock guardian breeds from various countries in Europe and Asia. Each is considered an important part of the culture and history of its region. To protect and conserve the genetic purity of the Kangal Dog, the of Turkey has established several state-sponsored breeding centers.

Although introduced many measures to replace Turkey's ic law with a secular system, many of the religious traditions still remain, one being the belief that the dog is an unclean animal that should not be allowed to enter a household. Dogs are however tolerated around human habitations and Kangal dogs are a common sight within the villages of central Anatolia. Some are kept on running chains outside their master’s house while others are allowed to wander about freely, having learned the boundaries of their access.

During an explosion of interest in the breed in the s, the decided to train the breed for jobs already being done by s and s. The project was abandoned after several years and numerous failures due to the breed's headstrong nature making it unsuitable for military work. Kangal numbers declined alarmingly as interest in them flared, exacerbated by the arrival of . Due to their size and independent nature, many dogs imported to urban settings were abandoned. Today, the kangal is protected by the Turkish government as part of Turkey's national heritage, making it now illegal to export Turkish Kangals to non-Turkish nationals. Government sponsored breeding centres have been established at town and , where the breeding, development and health records of every dog are charted, regardless of location. Pedigrees are recorded, and certificates of origin are issued to owners of genuine Kangal Dogs.

Britain’s first kangal litter was produced in by Gazi of and his mate Sabahat of . Dogs from this original line formed the foundation of the so-called "Seacop" stock.

In the US, the first purebred breeding programs for Kangal Dogs began in the early 1980s. The Kangal Dog is recognized by the United Kennel Club in the US, and by the national kennel clubs of South Africa, New Zealand, and Australia. Many Kangal Dogs are being bred in Germany as well, mostly by immigrant Turkish workers. Some are registered as Anatolians, that being the only registration option open to them in Germany; most are unregistered. The Turkish Kennel Club is currently petitioning the FCI for recognition of both the Kangal Dog and the Akbash Dog.