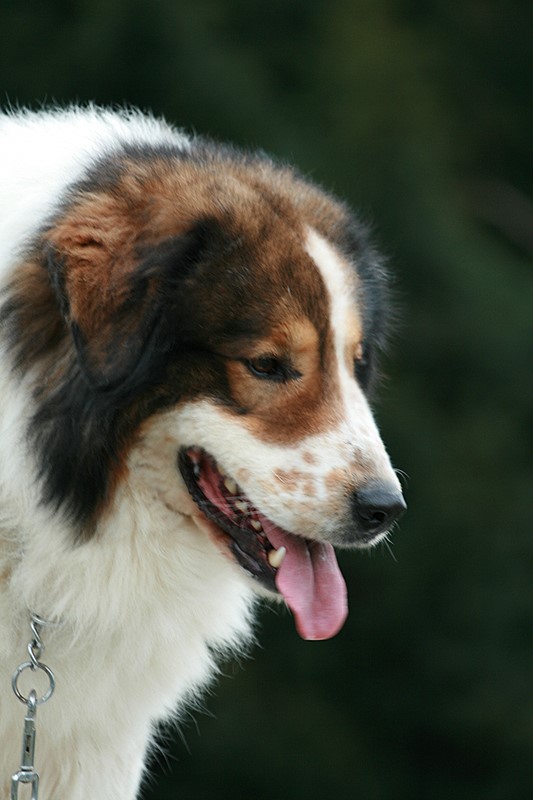 Tornjak is a large and powerful dog, well proportioned and agile. The shape of the body is almost square. The bone is not light, but nevertheless not heavy nor coarse. His coat is long and thick. The body of this dog is strong and well built, with harmonious and dignified movements. The hair is long and thick and adequately protects the body against bad weather conditions. The tail is shaggy, kept high like a flag. Tornjak has a clear, self-confident, serious and calm look to it. In general, Tornjak is a long coated dog with short hair over the face and legs. The topcoat is long, thick, coarse and straight. It is specially long on the upper part of the croup, over the shoulders and the back it can be slightly wavy. On the muzzle and the forehead, up to the imaginary line connecting the ears, over the ears and on the front parts of legs and feet it is short. It is especially abundant around the neck (mane), dense and long over the upper thighs (breeches). It forms feathers along the forearms. With well coated dogs it is also especially abundant on the rear of hind pasterns. The tail is richly coated with very long hair. Winter undercoat is long, very thick and of nice woolly texture. Hair is thick and dense and should not part along the back.

As a rule Tornjak is parti-colored with markings of various solid colors. The colour of Tornjaks is in fact unrestricted. It ranges from nearly completely white to almost black, with yellow, red, brown and not-quite-desired gray in between. There are two main types: piebald and Irish spotting. The goal is multicolourdness and distinction regarding towards other breeds.Usually the dominant ground color is white. There may be dogs with a black mantle and with white markings most often found around the neck, over the head and along the legs. There may also be almost white dogs with only small markings.

* HeadLupine, wedge-shaped and elongated. Due to the heavy coat it could look too small sometimes. Powerful and long jaws, teeth complete, scissor bite. The back of the muzzle is straight. The zygomatic arches above the eyes may be slightly noticeable. Back of skull elongated but not narrow, straight from zygomatic arches to occiput. Top of the muzzle straight, proportional, never pointed or excessively fleshy, lips fitted tightly to the jaws. Almond shaped eyes, eyelids close to the skull. Large ears, that are single turn down, set high up, nearer to the vertex than in other sheepdogs breeds.

* NeckLong1, carried low, set at 45 degree when alert. Neck muscles firm and taut. Skin quite thick especially at the nape of the neck and adheres to the inner tissue not only on the upper but also on the lower side of the neck. Covered with a rich crop of long hair (ruff).

* TailLong, can be saber-shaped, annular or hooked (slight upward turn at the tip), set medium high. Highly mobile, at rest hanging downwards. When in motion - trotting - or when alert or excited, always carried above the back.

* ChestVery broad, conically deep, wide and rounded, but ribs not heavy. The breast is well-proportioned and forms a firmly connected unit between shoulder joint and chest. As a rule, the sternum (breast bone) tip is a little below the shoulder joint.

* BellyFirm muscles, continuous lower line, moderately tucked-up from the back end of sternum to the inside of loins.

* CoatAs a rule, long coated with short hair on face and front part of legs.Top coat is long, hard textured (similar to goats) and straight. On the front part of shoulders and backside of rump it can be slightly wavy. Particularly well developed on the neck also below the tail very rich and long, forming trousers. Feathering on the forearm and very rich feathering on the tail. Upper hair is especially long on the upper rump just before tail set.Firmly closed and not able to be opened in parting.

Generally calm, not nervous and not aggressive. A very tough, not demanding, sturdy dog. Tornjak has a calm temperament. A typical adult Tornjak is very calm, peaceful, on first sight an indifferent animal, but when the situation demands it, it is a vigilant, a very alert watchdog.The character of Tornjak is equal to the temperament, they are not nervous and not aggressive in general, they are very tough, not demanding, and sturdy dogs. With their human family they are very emotional. When the Tornjak live in a pack they are highly social animals, and there is not any fighting between pack members. Toward strangers or other animals, as a rule, Tornjak is not emphasized aggressive. But when the situation calls upon it, Tornjak acts very determined and it can without consideration attack much stronger rivals. Shepherds use to say that a Tornjak who guards the flock is a fair match to two wolves, and a couple will encounter and chase away a bear without any undue respect. In this situations Tornjaks are very, but brusque, persistent and unpleasant ("angel becomes a demon").

Tornjaks belong to the rare livestock protection breeds. The Tornjak is one of the very old breeds from ancient times, and it was mentioned in handwritten papers for the first time in the 9th century, in a 's document. The breed was later mentioned in the 11th and 14th century. Tornjaks from these documents is the very same as they are today, except for the name of the breed, which was Hrvatski pas planinac, meaning Croatian dog from the mountain.The dogs in these documents was described entirely equal (function and exterior) as they are today: a protective guarding dog which keep and watch all what their humans ask from them, but highly intelligent and selected without sufficient aggression, and they are pleasant against strangers that they meet outside of their own property.It is considered that dogs of the Tornjak's type have existed in Dinaridi (region around Mountain , Croatia),as well as in the region around (region close to the city of , Bosnia), from the s . The Romans used their dogs as war and guardian dogs, as well as for fighting in the arena.Although the Tornjak is a very old breed, with the vanishing of nomadic sheep-breeding also the Tornjak vanished gradually. In the early 70's, a group of cinologs began to collect the remained dogs which best corresponded to the old writings about their race.

The first written tracks about the existence of Tornjaks date back to the 9th century. Description given to the Tornjak were found in the writings of Peter Horvat bishop of , , which date back to the year , those descriptions were also found in the writings of Peter Lukić canon of the Đakovo diocese, which were written in 1752. The term Tornjak evolves from the Bosnian/Croatian word "tor", which means an enclosed area where sheep live in. Still today, these dogs are called Torashi in the surroundings of the city of and on the - mountains, whereas the shepherds of the Dinara-mountains call them Dinarci.

According to research, Tornjak is most likely the descendant of the , or from where the today's Iran is. The environment has created a healthy and strong dog, with modest needs for food and shelter, and a great watchdog.

Exercise level is not too high, especially in first 9 - 12 months (during the last intensive growth). After that period, we can exercise our Tornjak as much as we can, the more the better. They prefer long walks without a leash, and a lot of playing with other dogs. The Tornjak will also be almost equally satisfied with a walk for only 20 minutes if we are in a hurry.Learns quickly and does not forget things easily, gladly performs tasks assigned to him. He is easy to train. Strong and hardy, during the snowing winter nights, these dogs lie on the ground and often get covered by snow. Tornjak is used for herding and protection of livestock; farmyard guard dog.

Tornjak is not recommended for apartment life. They need space and will do best with at least a large yard. Because its thick coat protects it so well, it can happily cope with living out-doors provided it has proper shelter.This breed of dog is best suited to a family with lots of space surrounding the home where it can attend to its own exercise needs.

Tornjak is a very healthy breed, but because they were very poorly fed in their past, they now do not need so much proteins in the food. For feeding Tornjaks a low protein diet is suitable. Feeding with a lot of protein in theirs food, can develop coat problems.Climbing up and downstairs the first six months can ruin theirs hock joints, or develop hyp-dysplasia.

Tornjak needs early socialization. The first experiences, until 9 months of age, has the most important influence to their entire life. In the first period of their life they have to meet all fearful situations, the earlier the better -for preventing later fear reactions on the stimulus: traffic noise, big trucks and buses will provoke fear reactions in adult age, if the puppy Tornjak already has not faced these situations several times.In this early age all Tornjak puppies have to meet as many strange people as possible, and also other animals, dogs, and pets especially, for developing a good and stable behaviour as an adult.No special training or equipment is needed.