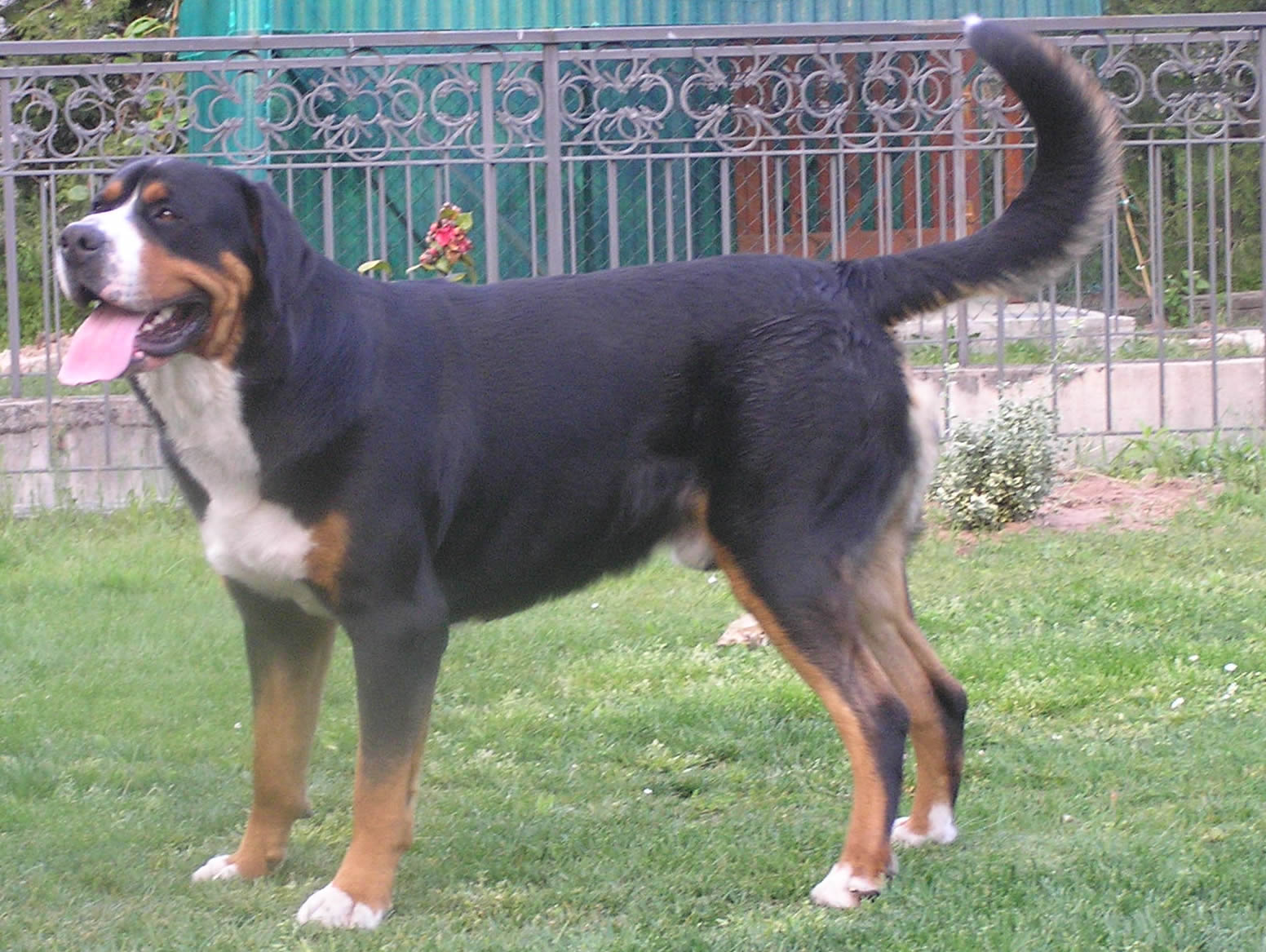 The Greater Swiss Mountain Dog is a large, muscular, tricolour (black, rust, and white; typically with a white blaze) dog. Males should weigh around 60 - 70 kg (132 - 154 lbs) the height is 65 - 72 cm (25.6 - 28.6 in) at the shoulders. The females weigh 50 - 60 kg (110 - 132 lbs) and are 60 - 68 cm (23.6 - 26.8 in) tall at the shoulders. The length to height ratio is around ten to nine. This breed must have a double coat to be considered show quality. There is black on top of the dog's back, ears, tail and the majority of the legs. There should be rust on the cheeks, a thumb print above the eyes and also rust should appear on the legs between the white and black. There should be white on the muzzle, the feet, the tip of the tail, on the chest down and some that comes up from the muzzle to pass between the eyes. The fur is a double coat, the top coat being around 5 cm long, the bottom coat being thick and a type of gray which must be on the neck, but can be all over the body; with such an outstanding coat, most Swissies blow coat twice a year.

The Greater Swiss Mountain Dog has a reputation of combining protectiveness with a gentle nature, particularly with respect to its love of its family, especially children.

These dogs are strong, active, and remarkably agile for their size. A Greater Swiss Mountain Dog can be trained for weight-pulling competitions and/or to pull carts behind them carrying goods or even a person. They also excel at herding and pack hikes. Also, unlike other mountain dogs, they do not drool excessively.Fact|date= August 2007 Prospective owners need to be prepared to give them lots of time and attention.

Swissies have a very strong pack instinct. They are protective of their family and training is important for them to learn their place. They want the pack to be together and get distressed when a member wanders off.

The Greater Swiss Mountain Dog was originally a herding dog, but was later used for draft. There are still farms today that use the dogs for pulling cheese or dairy carts to market, though today it is mostly ceremonial. It may have been the advent of mechanized vehicles, combined with the rise in popularity of the Saint Bernard Dog (the Greater Swiss Mountain Dog helped produce the Saint Bernard Dog), that led to the decline in popularity of the GSMD. However it happened, the breed was believed to be extinct, or nearly so, by the turn of the 20th Century.

In 1908, an owner named Franz Schertenlieb entered his mountain dogs in the Swiss Kennel Club (SKG) jubilee , knowing that they would be seen by an expert in native Swiss dogs, Dr. Albert Heim. Dr. Heim, an avid fancier, was apparently delighted to find a living example of the "Großer Schweizer Sennenhund", and exhorted the members of the Kennel Club to do all that they could to safeguard the breed, including scour farms and villages for healthy specimens for a breeding program.

His suggestion was acted upon, and a careful breeding program was begun. Due to the meticulous nature of the selection process, the lack of worthy brood bitches, and the requirement that all puppies be reexamined as adults for temperament and conformation to the requirements of the selection process before being certified as suitable for breeding, breed numbers grew slowly.

The Greater Swiss Mountain Dog, now often known as the GSMD or ‘Swissy’, is an example of an ancient, well-documented and established pure breed that was nevertheless not recognized by large all-breed s around the world. The first GSMDs were introduced to the in 1968, and were recognized provisionally by the AKC in 1985 and received full recognition in 1995, an ironically late date for such an old breed of dog. It was recognized by the UKC in 1992. The Swissy was recognized by the Canadian Kennel Club (CKC) June 1, 2006 and is shown in the working group.