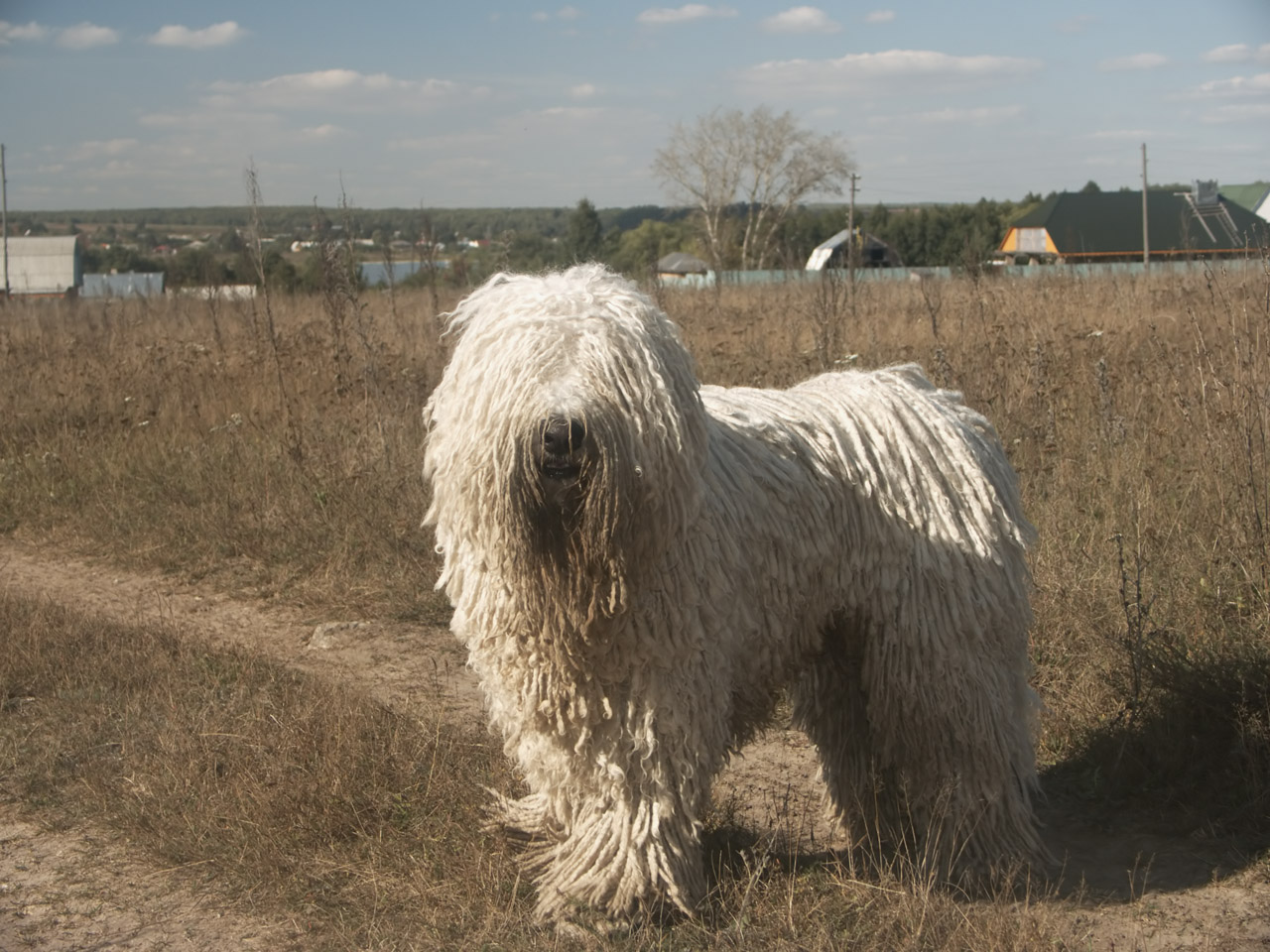 Females are minimum 27 inches (69cm) at the , often much taler. Male Komondors are a minimum of 28 inches at the withers, but many are over 30 inches tall, making this one of the larger common breeds of dog. The body is not overly coarse or heavy, however, and people unfamiliar with the breed are often surprised by how quick and agile the dogs are. The komondor has a similar appearance to a mop.

Its long, thick, strikingly corded white coat (the heaviest amount of fur in the canine world) resembles or a . The puppy coat is soft and fluffy. However, the coat is wavy and tends to curl as the puppy matures. A fully mature coat is formed naturally from the soft and the coarser outer coat combining to form tassels, or cords. Some help is needed in separating the cords so the dog does not turn into one large matted mess. The length of the cords increases with time as the coat grows. Shedding is very minimal with this breed, contrary to what one might think (once cords are fully formed). The only substantial shedding occurs as a puppy before the dreadlocks fully form. The Komondor is born with only a white coat, unlike the similar-looking , which is usually white, black or sometimes grayish. However, a working Komondor's coat may be discolored by the elements, and may appear off-white if not washed regularly. Traditionally the coat protected the Komondor from the wolf's bite. The wolf wasn't able to bite the dog through the thick coat.

The Komondor's temperament is like that of most livestock guarding dogs; it is calm and steady when things are normal. In cases of trouble, the dog will fearlessly defend its charges. It was bred to think and act independently and make decisions on his own. [ [http://www.5stardog.com/dog-breeds-komondor.asp Komondor Dog Breeds ] ] It is extremely affectionate with its family and friends and gentle with the children of the family. Although wary of strangers, it will nonetheless accept them when it is clear that no harm is meant. It is very protective of its family, home and possessions. It will instinctively guard them. The breed has a natural guardian instinct. An athletic dog, the Komondor is fast and powerful and will leap at a predator to drive it off or knock it down. It can be used successfully to guard sheep against wolves or bears. [ [http://www.5stardog.com/dog-breeds-komondor.asp Komondor Dog Breeds ] ] An explosion in the coyote population and a reluctance to use poison baits has led to a renaissance in the use of the Komondor as a flock guardian in the United States.

Because of the Komondor's huge size, power, and speed, its owner must have it under control. Obedience training is a must, preferably starting at an early age (4 - 8 months). Komondors generally take well to training if started early. A Komondor can become obstinate when bored, so it is imperative that training sessions be upbeat and happy. Praise is a must, as are consistent and humane corrections. Once a Komondor gets away with unfriendly or hostile behavior, it will always think such behavior is appropriate. Therefore, consistent corrections even with a young puppy are necessary to ensure a well-adjusted adult. Socialization is also extremely important. The Komondor should be exposed to new situations, people and other dogs as a puppy. Because it is a natural guard dog, a Komondor that is not properly socialized may react in an excessively aggressive manner when confronted with a new situation or person. Again, puppy training is strongly recommended for all Komondors.

Given the proper environment and care, a Komondor is a responsible, loving dog. They are devoted and calm without being sluggish. As in any breed, there is quite a range of personalities, so your needs should be outlined clearly to your breeder. An experienced breeder can try to identify that personality which would be happier as an independent livestock dog, or that which wants more to please and would make a good obedience dog or family pet. Adolescence can be marked by changes in a Komondor's temperament, eating habits, trainability and general attitude. Many Komondor are "late bloomers", not fully mature until nearly three years of age.

Komondors do not suffer many heredity problems. Perhaps because the breed has descended from centuries of hardy working stock, Komondors have few genetically linked problems. In particular, there is no evidence of the retinal eye problems found in other breeds, nor is there dwarfism or hereditary blood disorders.

As in all large breeds (and some small ones) there is some hip dysplasia, though the incidence is about 10% of all radiographs submitted, according to statistical studies of the OFA.

There are two eye disorders found in the breed. Entropion is indicated by the curling inwards of either the upper or lower eyelid. This lid deformity causes the lashes to rub against the cornea causing lacerations and infections. More recently, juvenile cataracts have been documented. The Canine Eye Registration Foundation, CERF, located at , evaluates eye exams and assigns a CERF number to it if the dog's eyes are free from genetic problems.

There is some indication of bloat, a life-threatening condition. The incidence of bloat is no greater than with any other large breeds. To possibly help to avoid bloat do not feed soon before or after any exercise.

External parasites can be a problem due to the heavy coat. As with any long-haired dog, a skin check should be part of a regular grooming routine. If fleas or ticks are found, aggressive measures are in order. Shampoos and powders work well, but great care should be observed as it is easy to miss a spot where the fleas can hide. Owners should check anti-flea and tick preparations carefully as the Komondor can be extremely sensitive to some of these products. It is recommended to spot-test the coat before dipping as some flea dips have been known to discolor the white coat. Flea collars can also discolor the hair beneath them, so look for a white or transparent one.

Ear care should also be routine. As Komondors have ears which prevent air circulation, it is especially necessary to keep them clean and hair-free. Some ear canals are more hairy than others, but commercial powders, cleansing fluids and plucking of the hair can greatly reduce infections.

Thick hair grows between the pads of the feet which also requires maintenance. This hair can pick up burrs, or become a source of irritation and infection when wet. For the health and comfort of the dog, this hair should be cut out with an electric clipper or scissors to keep mats from forming between the foot pads.

As in all breeds one should be careful that a Komondor have the proper s against , , , etc. Dogs should also be checked periodically for worms and other internal parasites. Like all stock guard dogs Komondorok are usually extremely sensitive to anesthetics. These drugs should always be administered to effect, never by weight.

The origin of the Komondor is debated. Some believe the Komondor were a dog of the , while others believe it to be a dog of the . According to the most probable explanation, Komondors were brought to Hungary by , the Turkish speaking, nomadic people who settled Hungary during the 12th and 13th century. The name "quman-dur" means "belonging to the Cumans" or "the dog of the Cumans," thus distinguishing it from a similar Hungarian sheepdog breed which later merged with the Komondor. The name Komondor is found for the first time written in 1544 in the History of King Astiagis by Kákonyi Péter, in Hungarian. Later in 1673 Amos Comenius mentions the Komondor in one of his works. [Komondor, kuvasz. Ujváriné Lukács Ildikó.]

The unique appearance gives a hint of common origin with the Puli and the . There might also be a link between the Komondor and the big, white Russian livestock dogs, the . The dreadlock coat must have developed under a dry and extreme temperature climate as it provides superb protection against cold and hot weather, but is not too comfortable in wet weather.

The Komondor is built for livestock guarding. It is big, strong, and armored with a thick coat. The coat provides protection against wild animals and the weather and vegetation, the coat of the dog looks similar to that of a sheep so it can easily blend into a flock and camouflage itself giving it an advantage when predators such as wolves attack. The coat is the trademark of the breed.

Today the Komondor is a fairly common breed in Hungary, its country of origin. Many Komondors were killed during and local stories say that this is because when the Germans (and then the Russians) invaded, they had to kill the dog before they could capture a farm or house that it guarded.