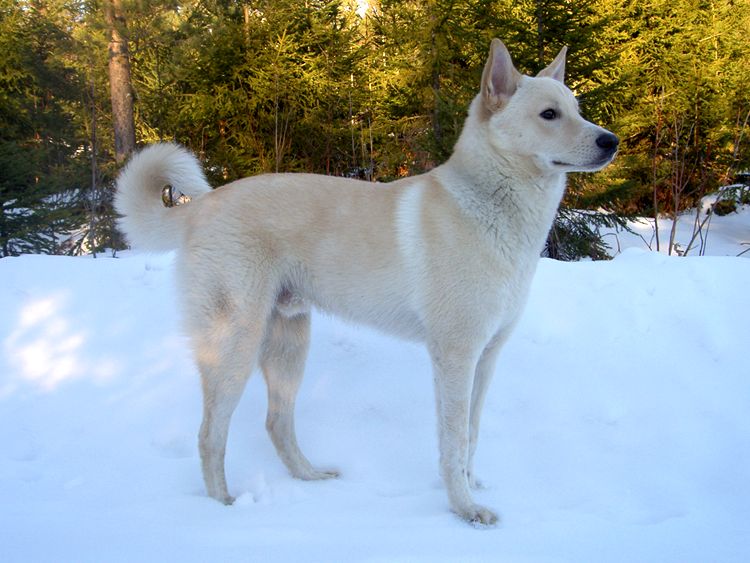 The Canaan Dog is the national dog breed of . It may have existed in the for millennia.

The Canaan Dog, known in Israel as ( _he. כלב כנעני, lit. "dog of Canaan", Kelev K'naani), is a typical in appearance. They are a medium-sized dog, with a wedge-shaped head, medium-sized, erect and low set ears with a broad base and rounded tips. Their outer coat is dense, harsh and straight of short to medium-length. The undercoat should be close and profuse according to season. Colour ranges from black to cream and all shades of brown and red between, usually with small white markings, or all white with colour patches. Spotting of all kinds is permitted, as well as white or black masks.

Dr. Menzel concluded that the Canaan Dog is a derivative of the Type III pariah dog - the collie type (referring to the type of farm found in the 1930s, which was a medium dog of moderate head type more similar to today's , not the modern rough coated ).

In writing the first official standard for the Canaan Dog, Dr. wrote: "Special importance must be placed on the points that differentiate the Canaan-Dog from the German Shepard Dog, whose highly bred form he sometimes resembles: the Canaan-Dog is square, the loin region short, the forequarters highly erect, the hindquarters less angulated, the neck as noble as possible, the tail curled over the back when excited, the trot is short (see also differences in head and color)". [http://www.thecanaandog.co.uk/details/1960---israel-kennel-club-225.html]

Type varies somewhat between the American lines of Canaan Dogs and those found in Israel and the rest of the world, with many of the American dogs being rectangular in shape.

Canaan Dogs have a strong survival instinct. They are quick to react and wary of strangers, and will alert to any disturbances with prompt barking, thus making them excellent watchdogs. Though defensive, they are not aggressive and are very good with children. They are intelligent and learn quickly, but may get bored with repetitive exercises or ignore commands if they find something of more interest.

In general, the Canaan Dog does not suffer from known hereditary problems.

Although the breed is one of the healthiest, Dr. George A. Padgett, DVM, listed diseases been seen, at one time or another, in the Canaan Dog in the : hypothyroidism, epilepsy, progressive retinal atrophy (PRA), cryptorchidism, hip dysplasia, osteochondritis dissecans (OCD).

The Canaan dog began in ancient times as a in . It belongs to one of the most ancient family of dogs, the .

This dog is one of the oldest, dating back to biblical times. The caves of Einan and Hayonim are sites in which the oldest remains of dogs have been found (more than 10,000 years ago). In the Bible there are a number of references to roaming dogs and dogs that worked for man. [http://www.cdca.org/inrnpa.html Report on the Canaan dog by Israel Nature Reserves and National Parks Authority]

In the , a rock carving, from the first to third century AD, depicts a dog that in size and shape appears to be a Canaan type dog.

In , a graveyard was discovered, believed to be from the middle of the fifth century BC. It contained 700 dogs, all carefully buried in the same position, on their sides with legs flexed and tail tucked in around the hind legs. According to the archaeologists, there was a strong similarity between these dogs and the "Bedouin pariah dogs," or the Canaan dog. A sarcophagus dated from the end of the fourth century BC, was found in Sidon, on which and the King of Sidon are painted hunting a lion with a hunting dog similar in build to the dogs of Ashkelon, and similar in appearance to the Canaan dog. [http://www.babrees.co.uk/faq.htm Where does the Canaan Dog come from?]

The Canaan is very similar to the Jindo dog, both in looks and characteristics. There is a legend that the Jindo arrived in Korea with one of Genghis Khan's generals and his army which eventually got stranded on the island of Jindo and incorporated itself into the local community. Perhaps they followed the army back from Canaan; this would explain the similarities in both look and character as well as their restriction, in Korea, to the island of Jindo. Unsurprisingly the Canaan dog is considered a national treasure in Israel as is the Jindo dog in Korea.

They survived this way until the 1930s, when Dr. came up with the idea to use these intelligent dogs mainly found in the , as guard dogs for the scattered settlements. Prof. Menzel was asked by the to help them build up a service dog organization (later to become ). She captured and acquired wild and semi-wild Canaan dogs. She worked with semi-free and free-living dogs of a specific type, luring them into her camp and gaining their trust. She also captured litters of puppies, finding them remarkably adaptable to domestication. The first successful adult she called Dugma (meaning example). Dr. Menzel found the dogs be highly adaptable, trainable and easy to domesticate. It took her about 6 months to capture Dugma, and within a few weeks she was able to take him into town and on buses.

She began a breeding program in 1934, providing working dogs for the military and she gave pups to be pets and home guard dogs. She initiated a selective breeding program to produce the breed known today as the Canaan dog. In 1949 Dr. Menzel founded The Institute for Orientation and Mobility of the Blind, and in 1953, she started to train Canaan dogs as guide dogs for the blind. Although she was able to train several dogs, she found that the breed was too independent and too small for general guide dog use, although some of her dogs were used successfully by children.

Her breeding program was concentrated with the Institute, where a foundation of kennel-raised Canaan dogs was established, carrying the name "B'nei Habitachon". She later supplied breeding stock to Shaar Hagai Kennels which continued in the breeding of the Canaan dog. After her death in 1973, Shaar Hagai Kennels continued the breeding program according to her instructions. In addition, a controlled collection of dogs of the original type was continued, primarily from the Bedouin of the Negev.

Collection of wild Canaan dogs has all but ceased. The last two dogs that were collected in the Negev in the mid-1990s, and most of the Canaan dogs living in the open were destroyed by the Israeli government in the fight against rabies. Even the majority of Bedouin dogs today are mixed with other breeds, [ [http://www.cdca.org/inrnpa.html Report on the Canaan Dog by Israel Nature Reserves and National Parks Authority] ] although Myrna Shiboleth visits the Negev annually, looking for good specimens living by the Bedouin camps, that she can breed with her dogs and strengthen the gene pool. [http://myrnash0.tripod.com/shaarhagai-canaandogs/id64.html Dogs of the Desert]

The Canaan dog was first recognized by the Israel Kennel Club in 1953 and by the FCI (Federation Cynologique Internationale) in 1966. The first accepted standard was written by Dr. Menzel.

The Kennel Club in the officially recognized the breed in December 1970.

In 1986, the first Canaan dogs were brought to from Sha'ar Hagai Kennel, in .

Canaan dogs in the U.S.

On , , Dr. Menzel sent four dogs to of , the first Canaan dogs in the . The Canaan Dog Club of America was formed the same year, and stud book records were kept from these first reports.

In June , the Canaan dog entered the Miscellaneous Class and dogs were registered in the AKC Stud Book as of , . The dogs began competing in conformation on , .

The Canadian Canaan Club (CCC) was formed in 1972, and the first executive of the Club was elected on March 15, 1973. The club has since been dissolved.

Canaan Dogs in the UK

A Mrs Powers brought the first Canaan Dog into the UK from Damascus where her husband worked at the University situated on the outskirts of the city. 'Sheba' spent May-October 1965 in quarantine before Mrs Powers could bring her home.

Mrs Connie Higgins met Shebaba when Mrs Powers brought her to a beginners obedience class she was teaching. Sheba was rather aggressive with other dogs, but good with people, especially children, but their was something about her that appealed to Connie. A bit later, due to personal circumstances, Mrs Powers agreed to give Sheba to Mrs Higgins who renamed her 'Shebaba' as she already had a German Shepherd named Sheba. Connie was convinced that 'Shebaba' had to be a breed of dog and began her search for an answer as to what kind of dog she had. The Israeli embassy gave Connie the address of a dog sanctuary in Jerusalem and Connie wrote to them. Then out of the blue, on 21st August 1968, she had a letter from Israel. it was from Prof Menzel herself. Connie's letter to the sanctuary had been forwarded on to her. She sent Connie a long list of questions about Shebaba -- eyesight, hearing, measurements, hair, reactions, character, accomplishments, etc., which Connie replied to with every photograph she could lay her hands on.

Connie soon had a letter from Prof. Menzel which said that if Shebaba were in Israel she would be accepted for registration and qualified at least “Very Good”. Dr Menzel eventually sent a dog named Tiron to Connie to be bred to Shebaba and then with the help of Dr Menzel, Mrs Higgins finally got Shebaba, Tiron and the puppies recognised by The Kennel Club in December 1970. Saffra Shebaba was the first Canaan Dog to be registered in the UK, and the breed was placed in the Utility Group.

It wasn't until May 1992 that the inaugaral meeting of the Canaan Dog Club of the United Kingdom took place. It has only been since 1996 that the breed has really begun to grow in numbers in the UK, though it is still quite numerically small. However, the quality is there and a good foundation is being laid for future generations.