The Dutch Shepherd Dog is a breed of dog. The breed is an old herding breed of Dutch origin. In the old days shepherds and farmers needed a versatile dog, a jack-of-all-trades, with few demands and adapted to the harsh and meager existence of that time.

From those working dogs the Dutch Shepherd Dog as we know it today was created. This background also explains the character traits which have been well preserved.

The length of the body (from point of shoulder to point of buttock) exceeds the height at the withers approximately in a ratio of ten to nine, as suits a trotting dog. The breed is similar to the German Shepherd.

Short hair: All over the body, quite hard, close-fitting, not too short coat with woolly undercoat. Ruff, breeches and tail plume are clearly visible. Long hair: All over the body, long, straight, well fitting, harsh to the touch, without curls or waves and with a woolly undercoat. Distinct ruff and breeches. Tail abundantly coated. Head, ears and feet and also the hind legs below the hocks are short and densely coated. The backsides of the forelegs show a strongly developed coat, shortening in length towards the feet, the so-called feathering. No fringes at the ears. Wire hair: Dense, harsh tousled coat and a woolly, dense undercoat all over the body except for the head. The coat should be close. Upper- and lower lip should be well-covered with hair, the whiskers and beard, and two well defined, coarse rough eyebrows that are distinct but not exaggerated. Furnishings are not soft. The hair on the skull and on the cheeks is less strongly developed. In profile it seems as if the head has a more square appearance. Strongly developed breeches are desirable. Tail is covered all round with hair. The brindle colour may be less pronounced because of the tousled coat.

Colour Brindle. The basic colour is golden or silver. Golden can vary from light sand- coloured to chestnut red. The brindle is clearly present all over the body, in the ruff, breeches and tail. Too much black is undesirable. A black mask is preferable. Heavy white markings on chest or feet is not desirable

The Dutch Shepherd is a high-energy, intelligent dog which requires a great amount of daily exercise. Lack of exercise can result in boredom and destructive behavior. They do best in a household with assertive people to give them leadership, consistency and guidance. Dutch Shepherds can be territorial and protective of their property and family. 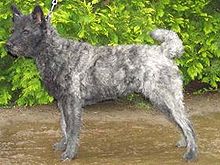 The short-haired Dutch Shepherd is used extensively throughout Europe and the United States as a working dog, primarily in police service, including search and rescue. Dutch Shepherds and similar sized working breeds such as the Belgian Malinois are increasingly popular with police agencies because the Dutch Shepherd breed has not been subject to extensive breeding as has the German Shepherd. This can adversely affect the health and temperament of the individual dog as well as the breed. For example the preference for the German Shepherd's sloping back has resulted[citation needed] in a 19.1% incidence of hip dysplasia compared to a 6.2% incidence found among the Dutch Shepherds.[1] 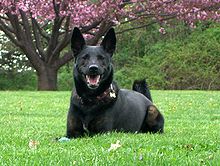 Dutch Shepherds are very active dogs. They have a strong "work ethic", constantly wanting to work and move. Thus it is exceptionally suited for all types of dog sports, particularly schutzhund, Service Dogs Of America, competitive obedience, agility, flyball, and sheepdog trials.

The long-haired variety needs to be groomed about once a week, or more frequently depending on work and environment. The short coated variety needs to be brushed and combed several times a week during the spring shedding period. Other times of the year, they only need occasional combing. Over-bathing this breed should be avoided to prevent dryness in the coat which may cause the dog to chew or scratch.

This breed typically lives 12 to 14 years. This breed is very healthy but as with many large breeds they do suffer from some hip dysplasia and heart defects, however far less frequent than German Shepherds. In many cases hip and joint problems are caused by owners running or jumping juvenile dogs before they are done growing. A dog should be 1 year old before forced exercise or jumping is done to avoid possible joint and hip problems.