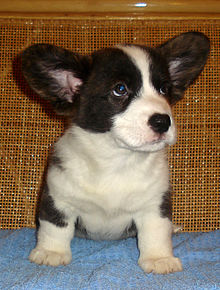 /ˈkɔrɡi/) is one of two separate dog breeds known as Welsh corgis that originated in Wales, the other being the Pembroke Welsh corgi. It is one of the oldest herding breeds.

Cardigan Welsh corgis can be extremely loyal family dogs. They do, however, need daily physical and mental stimulation. For their size, they need a surprising amount of exercise. Cardigans are a very versatile breed and a wonderful family companion. They can live in a variety of settings, from apartments to farms. 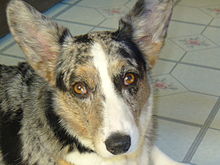 The face of a female Cardigan Welsh corgi.

The Cardigan is a long, low dog with upright ears and a bottle brush tail. The old American Kennel Club standard called it an "Alsatian on short legs". The Cardigan's tail is long (unlike the Pembroke Welsh corgi, whose tail may be long, short,[1] naturally bobbed or docked[2]). Cardigans can be any shade of red, sable, or brindle; they can also be black with or without tan brindle or blue merle with or without tan or brindle points. They usually have white on the neck, chest, legs, muzzle, underneath, tip of the tail, and as a blaze on the head, known as the "Irish pattern." Other markings include ticking on the legs and muzzle, smutty muzzles, monk's hoods, and others. A few other unofficial colors can occur, such as red merle. These colors are not considered an acceptable color per the Cardigan standard. An average Cardigan is around 10.5 to 13  inches (260 to 315 mm) tall at the withers and weighs from 30 to 38 lb. (13.6 to 17.2 kg) for the male and 25 to 34 lb. (11.3 to 15.4 kg) for the female.

Originally bred for farm work, including herding sheep and cattle, they have proven themselves as excellent companion animals and are also competitive in sheepdog trials dog agility, competitive obedience and rally obedience. Cardigan Welsh corgis were bred long and low to make sure that any kicks by cattle would travel safely over the dogs' heads without touching them. Like most herding breeds, Cardigans are highly intelligent, active, athletic dogs. Affectionately known as "a big dog in a small package," Cardigans are affectionate, devoted companions that can also be alert and responsible guardians. Some Cardigan corgis are 'one-man dogs'. They tend to be wary of strangers and to reserve their affection for a select few with whom they are familiar. If socialized at a young age, they can be nice with other dogs and housepets.

Cardigans are typically excellent watchdogs, as they are highly alert to the approach of strangers to their territory, and will be very vocal until they and/or their owner are assured that the stranger poses no threat.

Cardigans are said to originate from the Teckel family of dogs, which also produced Dachshunds.[4] They are among the oldest of all herding breeds, believed to have been in existence in Wales for over 3,000 years. The phrase "cor gi" is sometimes translated as "dwarf dog" in Welsh. The breed was often called "yard-long dogs" in older times. Today's name comes from their area of origin: Ceredigion in Wales. Originally used only as a farm guardian, they eventually took on the traits of a cattle drover, herder, and many more. They are still highly valued for their herding, working, and guarding skills, as well as their companionship.