The Maremma Sheepdog, in Italian Cane da pastore Maremmano-Abruzzese, usually referred to as just Maremmano, is a breed of livestock guardian dog indigenous to central Italy, particularly to Abruzzo and the Maremma region of Tuscany and Lazio. It has been used for centuries by Italian shepherds to guard sheep from wolves. The English name of the breed derives from that of the Maremma marshlands, where until recently shepherds, dogs and hundreds of thousands of sheep over-wintered,[1] and where the breed is today abundant although sheep-farming has decreased substantially. The breed is widely employed in Abruzzo, where sheep herding remains vital to the rural economy and the wolf remains an active and protected predator. Similar breeds include the Pyrenean Mountain Dog, the Kuvasz of Hungary, the Tatra of Poland and the Šarplaninac (although not white), with all of which it may share a common ancestor;[2][3] and the Akbash Dog of Turkey. See Mountain dog breeds.

Some divide the breed into various subtypes, largely based on small differences in physical attributes and with subtype names based on village and provincial names where the dogs may be found, e.g. the Maremmano, the Marsicano, the Aquilano, the Pescocostanzo, the Maiella, and the Peligno.[5] However, biologists dispute this division, as well as over reliance on minor physical differences, as the dogs were bred over the centuries for their behavioral characteristics as flock guardians.[citation needed]

Despite their large size, Maremma Sheepdogs can be good companion dogs in areas with adequate open space. Centuries of breeding the dogs to be gentle with lambs but fiercely protective of their flock has created a breed that will bond to families and show a calm, intelligent disposition. However, the dogs may display hostility towards outsiders and they are not suitable companion dogs for urban areas due to their large size and need for open space. A ranch type environment works best, away from neighbor's property lines and road traffic. In this environment, a dog house is not necessary because the dogs prefer to sleep with livestock.[6] 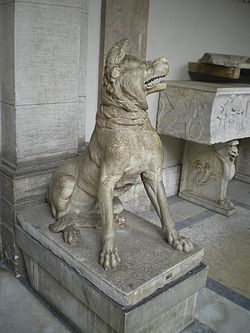 The canis pastoralis of Classical antiquity, in the Vatican Museums; the ears are a restoration. See also the Duncombe Dog

Descriptions of white sheep defence dogs are found in ancient Roman literature, in works such as those of Columella, Varro and Palladius. Similar dogs are depicted in numerous sculptures and paintings from Roman times to the present.[7] Among the earliest is the series of large statues (two in Rome, one in Florence, one – the Duncombe Dog – in England) copied from a Hellenistic bronze from Pergamon.[8] Iconographic sources that have been identified as relevant to the history of the Maremmano include:[8] 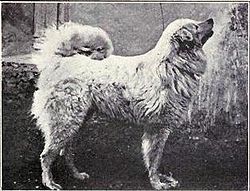 Sheepdog of the Abruzzes circa 1915

Until 1958 the Pastore Maremmano ("Shepherd Dog of the Maremma") and the Pastore Abruzzese ("Shepherd Dog of the Abruzzi") were regarded as separate breeds. A breeder's society for the Pastore Abruzese was formed in 1950, and one for the Maremmano in 1953. On 1 January 1958 the breeds were unified by the ENCI, the Ente Nazionale della Cinofilia Italiano, the national dog association of Italy. The explanation given is that a "natural fusion" of the two types had occurred as a result of movement of the dogs due to transhumance of sheep flocks from one region to another, particularly after the unification of Italy.[15] Until 1860, the mountains of the Abruzzo and the plains of the Maremma lay in different countries.

As sheep farming developed into an annual trek or transhumance from mountain grasslands of Abruzzo and Molise (and other parts of central Italy) south to lower pasture land in Puglia where sheep were over-wintered[citation needed], the dogs came to play a central role in the centuries-old migration, an annual event vital to Abruzzese culture. Maremmano dogs continue to be widely used by Italian sheep farmers in areas where predation is common, such as the Apennines of central Italy and the open range land of national parks in Abruzzo. Besides their wide use in Italy, Maremma Sheepdogs are extensively used as Livestock guardian dogs in Australia, the United States, and Canada.[16]

The traditional use of the Maremmano dog is as a guardian for the protection of sheep flocks against wolves. Columella, writing in the first century AD, recommends white dogs for this purpose, as the shepherd can easily distinguish them from the wolf, while Varro suggests that white dogs have a "lion-like aspect" in the dark.[17] The dogs work in groups; three or four dogs are an adequate defence against wolves and stray dogs. Their function is mostly one of dissuasion, actual physical combat with the predator being relatively rare.[18] Nevertheless, working dogs may be fitted with a roccale (or vreccale), a spiked iron collar which protects the neck in combat. The ears of working dogs are normally cropped.

Maremma used as LGDs are introduced to sheep flocks as puppies so they bond to the sheep. Some ranchers place Maremma puppies as young as 3–4 weeks old with young lambs [19] though beginning this bonding process at 7–8 weeks is more typical.[20] Although it is easiest to bond Maremma to sheep and goats, cattle ranchers have found that the dogs bond with cows and Maremma are increasingly used to protect range cattle.[21] Some ranchers have found success training Maremmas to protect free-range fowl like chickens from predation from both ground threats such as coyotes, stray dogs and foxes as well as aerial threats such as raptors (hawks, eagles, owls, etc.).[22]

Recently in Warrnambool, Australia, the world's first trial utilized a Maremma to guard the dwindling penguin population of Middle Island.[23] This project won the 2010 Australian Government Coastcare Award.[24] While using Maremma to guard an endangered species is rare, Maremma along with other breeds of livestock guarding dogs are appreciated by environmentalists because they make it possible for livestock to coexist with endangered predators such as wolves and coyotes, reducing their predation by 70% to 80% or more.[20] National park authorities in Italy, the United States and Canada have promoted use of the Maremma Sheepdog, as well as other types of LGDs, to minimize conflict between endangered predator species and ranchers.[citation needed]