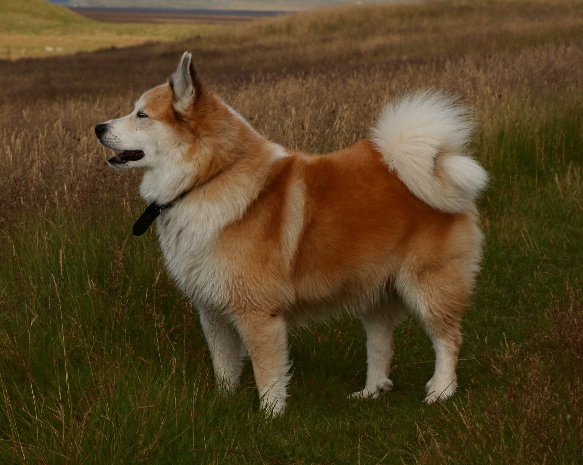 The Icelandic Sheepdog is a breed of of type originating from the dogs brought to by the s. It is of similar type to the and to the ancestor of the modern . They are still commonly used to herd sheep in the Icelandic countryside.

The Icelandic sheepdog is often described as a large dog in the body of a small dog.

These are the current breed standards:

Icelandic Sheepdogs are tough and energetic. Hardy and agile, they are extremely useful for herding and driving livestock or finding lost sheep. However, the dogs are not known for hunting. Icelandic Sheepdogs are very alert and will always give visitors an enthusiastic welcome, without being aggressive. Friendly and cheerful, the Icelandic Sheepdog is inquisitive, playful and unafraid. Most adore children and get along well with other dogs and pets.

The Icelandic sheepdog very much resembles dogs found in graves in Denmark and Sweden from about 8000 B.C. Dog imports to Iceland were limited and from 1901 even forbidden.

In 1650 Sir Thomas Brown wrote "To England there are sometimes exported from Iceland ... a type of dog resembling a fox ... Shepherds in England are eager to acquire them!"

Plague and destroyed over 75% of the breed in the late 19th century, leading to a ban on the importation of dogs to Iceland. The purebred Icelandic sheepdog was again bordering extinction in the late 20th century and in 1969 the Icelandic Dog Breeder Association ( [http://www.hrfi.is/ HRFÍ] ) was established to preserve the breed, among other aims.

The breed is sometimes denoted in Latin as "canis islandicus" even though it is a breed and not a species.

As the name implies, it is a , but is also used as a and general . When herding, the Icelandic sheepdogs were not mainly used to take the sheep from one point to another, but to prevent animals from straying. Additionally, the dogs were in charge of herding horses and other animals as well. When herding failed, the dogs drove the animals by barking. Thus, they tend to bark when they want something, although this behaviour can be controlled by training.

In the Icelandic landscape, sheep often get lost and it has historically been the dog's job to find them and return them to the herd. They are therefore used to working on their own and to figuring things out for themselves, so owners have to beware lest they learn things they shouldn't. As a guard dog, their main task was to alert the inhabitants when somebody was coming, so these dogs tend to bark a lot when they see people approaching.

The Icelandic sheepdog is very loyal and wants to be around its family constantly. It follows its owner everywhere. Unlike most working dogs, these calm down when indoors and will happily lie down at their master's feet.