Dronfield railway station serves the town of Dronfield in Derbyshire, England (population 25,000), south of Sheffield, on the Midland Main Line between Chesterfield and Sheffield.

Construction of the Sheffield & Chesterfield line was authorised by the Midland Railway Act of 1864 but it was not until Monday 2 February 1870 that the line and Dronfield station were opened to traffic. Railwaymen know the line as the "New Road" as against the "Old Road" built by the North Midland Railway which took an easier route along the Rother Valley and bypassed Sheffield. The station is on the long climb up the Drone valley to Bradway Tunnel at the point where the gradient steepens from 1 in 201 to 1 in 102.

The station had single storey wooden buildings on both platforms. The main buildings, including booking office and staff offices, were on the up platform (nearer Chesterfield Road). The smaller building on the other platform contained a waiting room and a ladies' waiting room.

To the south of the passenger station, on the land now used as a car park, was the goods station with a brick-built warehouse and several sidings. 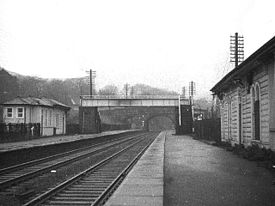 The original Midland Railway station buildings were still standing at the centenary. 1 February 1970

The station was closed to passengers with effect from Monday 2 January 1967, the last passenger train to call being the 21:41 Sheffield - Derby local on Saturday 31 December 1966. The station remained staffed for a year or two longer until the goods station closed. The buildings were demolished in June 1973 leaving only the platforms.

The station reopened to passengers on 5 January 1981 with a limited service at peak periods only.

The station is managed by Northern Rail, however, until 14 December 2008 no Northern services stopped there. A residents' pressure group, Friends of Dronfield Station, successfully campaigned for rail services to the town to be improved and continue to beautify the station and press for better facilities. Its president is local MP Natascha Engel.