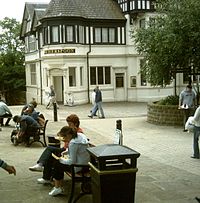 The Hotel, named after the Duke of Portland, at present

Chesterfield Market Place was a railway station in the centre of the town of Chesterfield, England. It was opened by the Lancashire, Derbyshire and East Coast Railway in March 1897 and was the headquarters of the line. It was closed by British Railways in 1951 following a collapse of the Bolsover Tunnel. The station possessed four platforms on two islands - 1 & 2, 4 & 5. In the centre, in place of the missing platform 3, was a release line for the locomotives.[2] The adjacent goods depot was, at the time, the largest covered area in the town.

Leaving the station, the line travelled along an embankment 700 feet long at Horns Bridge, which passed, in turn, over the River Hipper, the Great Central Railway, the Midland Railway and the main road. It consisted of four brick arches and four girder spans, 63 feet high. From there, the line climbed at 1 in 100 as far as the first summit at the 501 yard Duckmanton Tunnel, to the station at Arkwright Town

Market Place station was situated on West Bars, adjacent to two old inns; the White Horse and the Bird in Hand. To take advantage of the additional custom generated by the railway, the owners of the White Horse, William Stones brewery of Sheffield, applied to build a new hotel. This was approved by the licensing magistrates in April 1898.

As the licensing laws of the time prevented a pub from closing down during rebuilding, the new hotel was built in two parts. Building of the first phase commenced on the site of the Bird in Hand which had closed and had recently been demolished, its licence being transferred to the refreshment rooms in Market Place station. When the first part was complete the licence was transferred from the White Horse, along with the landlord, Job Siddall. The second phase was then erected on the site of the White Horse. The hotel, named after the Duke of Portland, on whose estate much of the railway ran, was officially opened Christmas 1899 by the Earl of Rosebery Archibald Primrose.

Until 1927, the station was also served by Chesterfield Tramway which ran from Brampton to Whittington. A dead end spur was built near the station and was situated on Market Place.

Chesterfield was, at one time, served by three railway stations. The other two are