British Rail Class 158 Express Sprinter is a diesel multiple-unit (DMU) train, built for British Rail between 1989 and 1992 by BREL at its Derby Works. They were built to replace many locomotive-hauled passenger trains, and allowed cascading of existing Sprinter units to replace elderly 'heritage' DMUs.[citation needed] Class 159 trains are almost identical to Class 158s, having been converted from Class 158 to Class 159 in two batches.[3][6]

As built, interiors were described as fully carpeted, with "panoramic" windows and a variety of seats arranged both airline-style and in bays of four around tables. Unlike previous members of the Sprinter family, such as the Class 156 SuperSprinter, the Class 158 featured air conditioning, an on-board payphone, power-operated interior doors, a toilet in each carriage, and provision for a refreshment trolley service. Despite an increased top speed of 90 miles per hour (140 km/h), the train also promised a smoother, quieter ride than its predecessors.[7]

Class 158 trains were expected to achieve 13,500 miles of operation between major services and a range of up to 1,600 miles from each refuelling.[7]

Despite the attention given to passenger facilities, the phrase "garden shed engineering" has been used to describe the build and technology of the Class 158.[8] As a lightweight unit and the first members of the Sprinter family to use disc brakes, autumn leaf mulch built up on wheel rims and prevented the trains from correctly operating signalling track circuits.[9] Though later solved by installing scrubbing blocks to clean the wheels, temporary solutions were sought in October 1992, with some units split and formed into hybrid units with Class 156 coaches,[10] as the latter had tread brakes which cleaned the wheels as a by-product of their operation.

The class has also suffered from unreliable air-conditioning systems[8] since the outlawing of the CFC gases with which they were originally designed to work.[11] Following privatisation, many operators undertook to re-engineer or entirely replace such equipment.[12] As a result, the systems in use and their effectiveness now vary across the fleet.

The lightweight aluminium body of the Class 158 leads to a good 'route availability' score,[1] meaning that it is able to operate in parts of Britain where heavier units cannot. However, the trains were once blocked from operating between Manchester and Buxton due to the possibility of the large roof-mounted air vents striking low bridges[citation needed] and have also been refused permission by Network Rail to operate on the Conwy Valley and Borderlands lines due to station dwell times and issues of platform clearance.[13][14]

ScotRail was the first part of British Rail to introduce the Class 158 to service, gaining a fleet of 46 units which entered squadron service in 1989. These were employed on Glasgow Queen Street to Edinburgh Waverley services, as well as services to Aberdeen and Inverness. The Class 158 then went on to be deployed elsewhere in Britain, primarily in the Midlands, northern England and Wales.[7]

With the majority of the fleet coming under the control of the Regional Railways division, the train became a mainstay of secondary express services between provincial towns and cities. Examples included long-distance trans-Pennine services in the north of England, as well as a range of upgraded regional services under the Alphaline brand in the Midlands and Wales.

A small batch of units numbered 158747-158751 were used by InterCity to supplement its core fleet on some cross-country services, mainly from the North West to Scotland, but also to Portsmouth.

After the privatisation of British Rail, the Class 158 fleet was divided among several franchises. There is an ongoing fleet shuffle with many units being swapped between operators.[citation needed]

The first privatised incarnation of ScotRail inherited a 46-strong fleet which continued in service. Following the introduction of newly built Class 170 units on primary express services in 1999, the Class 158 fleet was reduced in number by six, with those remaining cascaded away to secondary routes such as the Far North Line. This in turn allowed older trains in the company's fleet to be withdrawn.[citation needed]

In 2003, plans existed for part of the fleet to be swapped with Class 156 units operated by Central Trains, as the latter were thought better suited to some of the short-distance routes now being operated by ScotRail's 158s.[15] However, this failed to materialise and by the mid-2000s operations of the ScotRail 158s ranged from short hops (such as Glasgow Queen Street to Anniesland) to rural lines and long-distance expresses, supplementing other express units. In 2010 these units started to appear at Glasgow Central station to run on the Glasgow Central to Edinburgh via Shotts line, and on to the Glasgow Central to Whifflet line. Some additional units have since been acquired from other operators to provide extra capacity.[16][17]

Refurbishment and reliverying has also taken place since privatisation. The original ScotRail franchise applied its own livery to trains, followed by a further repaint by First Group after it took control of the franchise. The fleet has now gained a permanent blue-and-white livery based on the Scottish Saltire, after Transport Scotland announced in September 2008 that it was specifying a permanent livery for all Scottish trains, which will not be changed in the event of a change of franchisee.[18] Interiors have also seen attention on more than one occasion. The most recent refurbishment of 25 units involved repainting, new seating, extra luggage space and new customer information systems.[19][20][21] Toilet retention tanks were also fitted.

In the early days of privatisation, 158s were in regular use by Wales and West on its long-distance Alphaline services from south Wales to north-west England, north Wales, Cornwall and London Waterloo, as well as on some Central Trains services to Cardiff and along the Cambrian Line.[22] Successor companies Wales and Borders Trains (2001) and Arriva Trains Wales (2003) continued to use this type of unit on similar workings, with a total allocation of 40 trains also allowing Cambrian Line services to become entirely Class 158-operated.[23] By the end of 2006, a total of 16 units (158815-158817 and 158842-158854) had returned to the leasing company[24] as Arriva gained exclusive use of the entire Class 175 Coradia fleet which had previously been shared with other train operators.

The remaining 24-strong Class 158 fleet became permanently based at a purpose-built depot in Machynlleth during 2007.[25] Despite initial problems in retro-fitting the necessary 'glass cockpit'-style driver controls,[26] Arriva's fleet of Class 158 units has become the first such fleet in the UK to be enabled for regular ERTMS operation.[4][27] Accordingly, the units operate all Cambrian Line services between Mid Wales and Birmingham, as well as supplementing the Class 175s on other long-distance routes such as Holyhead to Birmingham.[28] In 2009, Arriva also proposed using the fleet to provide direct service between Aberystwyth and London,[29] although this proposal was later rejected by the Office of Rail Regulation.[30]

A complete refurbishment programme to provide the trains with an 'as new' interior is taking place over an 18-month period from December 2010,[31][32] funded by the Welsh Assembly Government at a cost of £7.5m.[33] Until this refurbishment, the fleet had seen only minor attention to its interior since a refit by Wales and West in the late 1990s, as well as having been only partially repainted into Arriva colours externally.[24]

Class 158s were introduced to the East Midlands to replace the then-new Class 156s on the express services such as Norwich to Liverpool. Regional Railways Central used Class 158s to operate express, long-distance Alphaline-branded services. Following privatisation, Central Trains operated these services but quickly procured a large fleet of Class 170 Turbostar units for such services and displaced the Class 158 fleet to secondary routes such as Birmingham New Street to Hereford and Derby to Matlock.[citation needed]

East Midlands Trains (EMT) has a fleet of 25 units inherited from Central Trains, with some units transferred from First Great Western and South West Trains. EMT's 158s operate on secondary non-express workings such as Nottingham to Skegness, Nottingham to Matlock and Leicester to Lincoln Central. The 158s also operate long-distance services such as Liverpool Lime Street to Norwich via Nottingham.[citation needed]

The Norwich-to-Liverpool service has been criticised for overcrowding.[34] Four additional Class 156 DMUs which will be leased from Angel Trains (currently in operation with Northern) to enable more route 2 services to run as four-coach trains are now overdue (this is due to London Midland not yet releasing Class 150 units to Northern Rail to replace the Class 156s). From December 2012 when the sprinter refurbishment programme is complete, all route 2 services between Liverpool and Nottingham will be able to operate as four-coach trains. In addition, between May 2011 and December 2011 the 13:52 from Liverpool will operate through to Norwich.[35] 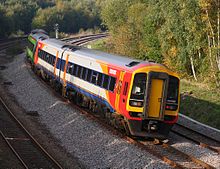 The Wales and West franchise (later named Wessex Trains) originally operated twelve Class 158 trains on long-distance services on the Wessex main line. These units were extended into three-coach formations with the acquisition of further units. Unlike the purpose-built three-car Class 158s and Class 159s, the centre car was a Driving Motor with the cab locked out of use and an adapter to connect the different-sized gangways.[citation needed]

In 2006, First Great Western (FGW) inherited the Wessex Trains fleet following the merger of the Great Western and Wessex companies. FGW then swapped their Class 158s for former Transpennine examples;[36] this was so that the fleet could be standarised with Porterbrook owned units.[citation needed]During late 2007 and early 2008, the FGW Class 158 fleet was refurbished. Improvements included: re-upholstery of seats, and repainting or replacement of interior fittings, alterations to interior lighting and total replacement of toilets. Additionally the windows have been replaced with safer laminated glass and Halon fire extinguishers replaced with foam ones. Concurrent with the refurbishment was a scheduled engine overhaul. When released the units were reliveried in FGW's own lilac and blue colours.[37]

The fleet is now used on the long-distance Cardiff Central to Portsmouth Harbour/Brighton, and Weymouth to Worcester Shrub Hill/Great Malvern services.[citation needed] 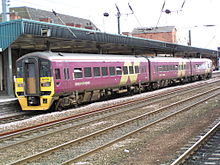 Following privatisation Northern Spirit (later renamed Arriva Trains Northern, and subsequently Northern Rail in 2004) was created from Regional Railways North East. Northern Spirit inherited a large fleet of Class 158 units, many of which were used on TransPennine Express services, the rest on West Yorkshire Metro-sponsored services. First North Western (descended from Regional Railways North West) had eight Class 158 trains, which were based at Newton Heath and used on various mid- to long-distance routes, which were transferred to Leeds Neville Hill depot at the start of the Northern Rail franchise and are now exclusively used on former Arriva Trains Northern routes. A number of 158s are currently sponsored by Merseytravel despite the fact that they do not go near Merseyside. This sponsorship is to ensure that Class 156s were cascaded from West Yorkshire to the busiest Merseyside services.[citation needed]

Virgin CrossCountry also operated a small number of Class 158 trains, numbers 158747-158751, before the introduction of the Class 220/221 Virgin Voyagers. These were used on Manchester Piccadilly/Liverpool Lime Street to Glasgow Central/Edinburgh Waverley services via the West Coast Main Line as well as services through the Stroud Valley between Swindon and Birmingham New Street. Most of these units are now operated by First Great Western.[citation needed]

Currently South West Trains operates Class 158s from Salisbury to Waterloo and on the Salisbury to Romsey via Southampton Central service, between Brockenhurst and Lymington on weekdays, and on a variety of local journeys within Hampshire.[3]

Prior to the introduction of the Class 220/221 Virgin Voyagers, Virgin Cross Country operated a small number of Class 158 units, numbers 158747-158751. These were used on Manchester Piccadilly/Liverpool Lime Street to Glasgow/Edinburgh services via the West Coast Main Line. One also did the Swindon-Stroud-Birmingham route. Most of these units are now operated by First Great Western.[citation needed] 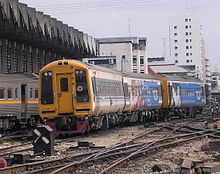 In 1990-91, BREL built twelve 3-car units based on the Class 158 for State Railway of Thailand.[38][39] These differ from the British units in being fitted to Thailand's metre gauge, featuring differently styled outer-end gangways, manually operated inward-opening hinged doors, and additional air-conditioning. They retain the original white, blue and black 'Regional Railways Express' livery.[39] All units of Class 158 of State Railway of Thailand will be refurbished in 2011.[40]