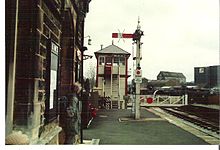 Darley Dale Station in the 1990s

Lying at the bottom of Station Road in the settlement of Darley Dale, Darley Dale in its current form is not the first station to have existed upon the site. That halt was built in 1849, by the Manchester, Buxton, Matlock and Midlands Junction Railway, and existed on the other side of the level crossing. The present structure dates back to 1873, and at one time the station possessed both a footbridge and a goods yard.

The station survived into the British Rail era, but succumbed to the round of closures that followed the government economies of the 1960s. The station reopened in its current guise at the beginning of the 1990s, as a result of the efforts of heritage and preservation group Peak Rail. Since then, the latter have run heritage steam services on the former London, Midland and Scottish Railway route to both Matlock via Matlock Riverside and since 1997, to Rowsley South.

Both platforms are now in use by Peak Rail. The station building on the Up platform contains an exhibition and waiting room, other facilities at the location include toilets with disabled access and parking for a small number of cars. Tickets must be purchased on the train however, as there is no longer a dedicated ticket office at this location.

The station also possesses a signal box at the southern end of the Up platform, with a level crossing (Station Road) just beyond it. Contrary to first impressions, this signal box is merely of cosmetic use, with the crossing controlled by a crossing keeper's hut at road level (located on the Down side, and across the road from the station). Part of the reason for this is the visibility required to operate the crossing is unavailable from the raised signal box, a structure once located at Bamford. In March 2008, the crossing keeper's hut was replaced by a more extensive traditional structure (albeit a new build), required as part of the increased signalling equipment on the railway. The latter has, in effect, split the operation into three controlled sections, permitting better timetabling and more efficient services, while also providing the necessary infrastructure to cater for extensions to the present line.

Darley Dale also possesses two small yards, at the north and south ends of the station. Previously used to stable small amounts of rolling stock and locomotives, these have now been cleared pending a full-scale refurbishment of the life-expired facilities. Ultimately, it is anticipated that the yard will effectively form the railway's Diesel Depot, although no date has been set for this to happen. Neither yard at Darley Dale is open to the public.