The station has the PlusBus scheme where train and bus tickets can be bought together at a saving. In late 2009, Chesterfield became a Penalty fare station for East Midlands Trains services.

The first line into Chesterfield was the North Midland Railway from Derby to Leeds in 1840. The original station was built in a Jacobean style similar to the one at Ambergate but it was replaced in 1870 by a new one further north in the current location, when the Midland Railway built the "New Road" to Sheffield.

In 1893 the Manchester, Sheffield and Lincolnshire Railway, later to become the Great Central Railway, crossed under the North Midland line 0.5 miles (800 m) south, at Horns Bridge, to a station a few yards west. In 1897, the Lancashire, Derbyshire and East Coast Railway arrived, with a viaduct seven hundred feet long, above both lines, with a station at the Market Place.

This station is currently[update] owned by Network Rail but is operated by East Midlands Trains, which operates trains between Sheffield and London St Pancras International, and is part of the Stagecoach Group. The station was extensively rebuilt shortly after Midland Mainline took over its operation from British Rail in 1996. Midland Mainline lost their franchise in November 2007 the running of the station was therefore passed onto East Midlands Trains.[1] 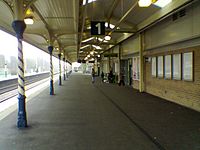 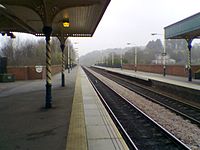 Entrance to the station is on Crow Lane and includes a car park, taxi rank and bus stop. There is also a small car park on the other side of Crow Lane which does not have a parking charge. The main entrance leads to the station concourse, which is very spacious and was built in the late 1990s. It includes a ticket office, a newsagent, a café and a waiting room. The concourse and the waiting room both have direct access to platform 1. There is also a waiting room on platform 2, which is accessed via a tunnel, using the stairs or lift in the concourse.

The fast lines have two large side platforms, one for each direction. These platforms are covered for around half their length. The goods lines pass around the rear of platform 2, and there is a third large platform here that serves the southbound goods line.

Platform 3 is bidirectional and was opened in July 2010. At present it has no regular services and is used during engineering works to reduce dependence on replacement bus services.[2] It is located on the down slow line, backing on to Platform 2, and long enough to accommodate a 10 car train. Platform 3 had existed in a previous incarnation decades earlier, although it was a bay platform.[3][4]

Down iron ore train north of Chesterfield (Midland) in 1957

The building of platform 3 was originally planned for 2007/8 to go with the East Midlands North Erewash resignalling scheme and would have allowed passenger services to run on the bi-directional down slow line (goods line) from a new Chesterfield South Junction to Tapton Junction during perturbation or engineering work on the fast lines in this area. It would have also facilitated the turn back of trains at Chesterfield during the Bradway Tunnel blockade in 2008/9.[5] Work on the platform actually began in March 2010 [6] 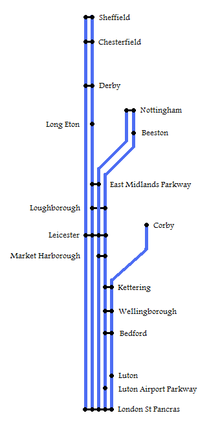 The 07:39 East Midlands Trains Master Cutler service runs to London via Derby and Leicester Mondays to Fridays providing a fast business train, arriving at London by 09:37.[7]

Based on the above, there are typically 12 trains per hour passing though the station on weekdays (6 in each direction), with 9 of those calling.

Chesterfield was, at one time, served by three railway stations. The other two are