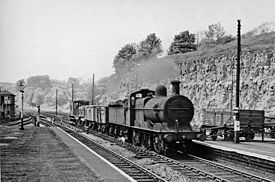 Up local goods at Miller's Dale Station in 1957 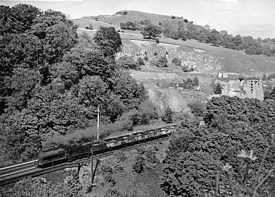 Millers Dale, with Down freight passing in 1957

Millers Dale railway station was a station situated in Millers Dale in the Peak District. It was built in 1863 by the Midland Railway on its extension of the Manchester, Buxton, Matlock and Midlands Junction Railway from Rowsley.

It served an important junction where passengers for Buxton joined or left the trains between London and Manchester. It was originally to be called "Blackwell Mill" but, in the end, was named "Millers Dale for Tideswell". For such a rural location it was unusually large; indeed, it was one of the largest stations on the line, and was one of the few stations in England to have a post office on the platform. Millers Dale also sent dairy, agricultural and quarried products from the surrounding areas to the major cities. While also serving local towns and villages—notably Tideswell, Taddington and Wormhill—much of its activity was concerned with the connecting service to and from Buxton. Traffic for Buxton actually followed the main line north for nearly two miles, before diverging at Millers Dale Junction, beside Blackwell Mill Halt.[4]

Built on a shelf carved out of the hillside, Millers Dale station originally had two platforms, but a bay platform was added in 1905 to accommodate Buxton trains, plus the down platform became an island platform to serve the extra tracks. At this time the second (northerly) viaduct was added. Whilst the piers for the two viaducts are identical, the older viaduct is supported by an arch structure, whereas the later one is a more practical box structure.

For a while, 'through' carriages for Buxton were attached to and detached from expresses. Part of the original Parliamentary Act, approving the line, considered the needs of invalids taking the waters at Buxton. This therefore alleviated the problem of changing trains. In addition, the two main platforms were connected by a subway.

Changing at Millers Dale often involved a wait, and the High Peak News of November 1900 referred to the station as "Patience Junction".[4] The station was later immortalised in the 1964 song "Slow Train" by Flanders and Swann.[5]

Since the railway was closed in 1967 the station has become a car park serving the Monsal Trail, although the main buildings remain, partly being used as public toilets. Although disused, the hamlet of Millers Dale is still dominated by the two large viaducts over the Wye valley. The older of the viaducts today forms part of the Monsal Trail, an 8.5-mile (13.7 km) walking and cycle track.