Derby Friargate Station was the main station in Derby on the Great Northern Railway Derbyshire Extension popularly known as the (Derby) Friargate Line. 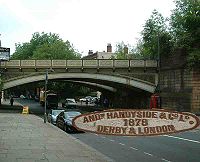 Today little remains of the station except Andrew Handyside & Co's bridge over Friargate. Although the remaining arches attached to the south side of Friargate bridge on the right side reveal a boarded-up arch, the inside of which contains the original staircase to the central island platforms. Now vanished is the canopy that provided passenger access to the station, which was situated directly adjacent to the boarded-up arch. It is now impossible to access this from below or from the boarded-up recess where the staircase ascended to the platforms.

Friar Gate Station remains can be found under the trees and scrub to the right. The arrow shows the old track bed over the bridge. The houses on Friar Gate can just be seen beyond the trees.

It is possible to walk the old station site and to inspect Handyside's bridge, although the crossing has been fenced off for safety reasons. The old route of the line was towards Mickleover over a steeped bridge taking the line under Uttoxeter Old Road. The main line and sidings are now an industrial estate. 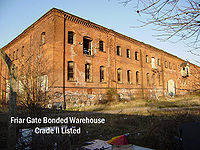 The Great Northern Railway Goods Wharf, viewed from Friar Gate, is a Grade II listed building, though derelict, plans still exist to turn this into apartments. As the building is listed it is protected from demolition.

From here the route approaches the site now occupied by Sainsbury's and there are still some signs of the existence of the old railway, such as a disused bridge over where the line once stood. Further along and a bridge carrying the old Kingsway part of Derby outer ring road can be observed, although today it only carries a little used pavement.

Next the line crosses the line of the A38 and climbs through a deep cutting to a summit at Mickleover tunnel. Neither end of the 464-yard tunnel is visible, having been hidden beneath spoil since 1982. For further information about the route of the line and its history see Great Northern Railway's Derbyshire Extension.

In late 2007 many members of the public and people with local businesses near Friar Gate railway bridge have noticed the poor state of maintenance of the bridge. Several letters appeared in the local paper about this issue.[citation needed] An on-line petition was set up for people to show their support for getting the council to restore the bridge. The bridge was sold by British Rail to Derby City Council for a pound in the 1960s. The transaction was carried out on the promise that the bridge should be maintained in good condition in perpetuity.[citation needed]

Published in 1998, the book Memories of Friargate Station by local author Susan Bourne, chronicles the station from its early days until its demolition. It also looks at the people who worked there.[3]

The Flanagan and Allen song "Underneath the Arches" may be about the bridge. According to a TV programme broadcast in 1957, Bud Flanagan said that he wrote the song in Derby in 1927, and first performed it a week later at the Pier Pavilion, Southport.[4]