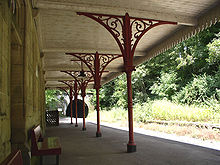 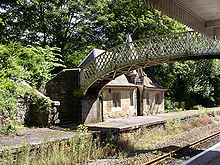 Cromford railway station is a railway station owned by Network Rail and managed by East Midlands Trains (EMT) Train operating company (TOC). It is located in the village of Cromford in Derbyshire, England. The station is on the Derwent Valley Line 25 km (15½ miles) north of Derby towards Matlock.

The now unstaffed station is served by East Midlands Trains Local, who operate the service from Nottingham to Matlock (via Derby). For journeys beginning at Cromford, the full range of tickets for travel for any destination in the country are purchased from the guard on the train at no extra cost. Journey time to Derby is approximately 26 minutes. During service disruption, buses will pick up or set down on the A6 main road. Services are approximately hourly, Monday to Saturday, following service improvements in December 2009.

The station, and, in particular, the old Waiting Room, was the setting for the cover artwork of Oasis' single "Some Might Say".

Originally known as "Cromford Bridge", it was opened by the Manchester, Buxton, Matlock and Midlands Junction Railway in 1849.[1] This is one of the few stations on the line that has been preserved and is a Grade 2 listed building. It is said to have been designed by G.H.Stokes, son-in-law of Joseph Paxton. It is believed that Stokes also designed Station House (built in 1855), the extremely ornate former Station Master's residence opposite the station on the side of the hill as well as the ornate villa style waiting room, on what was the 'up' platform. According to English Heritage,[2] this is the original station building. The present station building on the opposite (down) platform was added by the Midland Railway at a later date

Following many years of neglect and decline, a long lease on the main station building was purchased by the Arkwright Society, and the building has been restored and improved, re-opening as office space in May 2009. Station House, of which the old Waiting Room is a part, is now self-contained holiday accommodation.[3]

In September 2009, the station was the site of the motiveless murder of a taxi driver by gun fanatic, Colin Cheetham.[5]