Martinique (French pronunciation: [maʁtinik]) is an island in the eastern Caribbean Sea, with a land area of 1,128 km2 (436 sq mi). Like Guadeloupe, it is an overseas region of France, consisting of a single overseas department. To the northwest lies Dominica, to the south St Lucia, and to the southeast Barbados. As with the other overseas departments, Martinique is one of the twenty-seven regions of France (being an overseas region) and an integral part of the Republic. The first European to encounter the island was Christopher Columbus in 1502.

As part of France, Martinique is part of the European Union, and its currency is the Euro. Its official language is French, although many of its inhabitants also speak Antillean Creole (Créole Martiniquais). 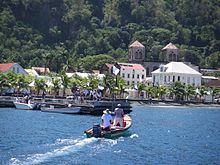 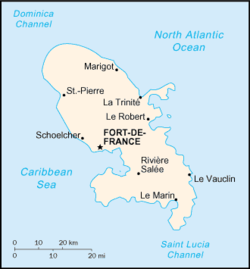 The island was occupied first by Arawaks, then by Caribs. It was charted by Columbus in 1493, but Spain had little interest in the territory. It was claimed by France in 1635 and, despite several interludes of British occupation, once during the Seven Years' War and twice during the Napoleonic Wars, has remained a French possession. In 1946, the French National Assembly voted unanimously to transform the colony into an overseas department.

Martinique is divided into four arrondissements, 34 communes, and 45 cantons.

Location: Caribbean, island in the Caribbean Sea, north of St. Lucia and south of Dominica 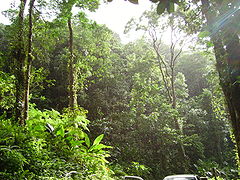 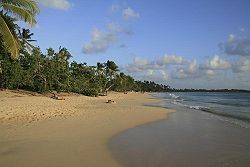 Les Salines, wide sand beach at the western end of the island.

The north of the island is mountainous and lushly forested. It features four ensembles of pitons (volcanoes) and mornes (mountains): the Piton Conil on the extreme North, which dominates the Dominica Channel; Mount Pelée, an active volcano; the Morne Jacob; and the Pitons du Carbet, an ensemble of five extinct volcanoes covered with rainforest and dominating the Bay of Fort de France at 1,196 metres (3,924 ft).

The highest of the island's many mountains, at 1,397 metres (4,583 ft), is the famous volcano Mount Pelée. Its volcanic ash has created gray and black sand beaches in the north (in particular between Anse Ceron and Anse des Gallets), contrasting markedly from the white sands of Les Salines in the south.

The south is more easily traversed, though it still features some impressive geographic features. Because it is easier to travel and because of the many beaches and food facilities throughout this region, the south receives the bulk of the tourist traffic. The beaches from Pointe de Bout, through Diamant (which features right off the coast of Roche de Diamant), St. Luce, the continent of St. Anne and down to Les Salines are popular.

The economy of Martinique is based on trade. Agriculture accounts for about 6% of GDP and the small industrial sector for 11%. Sugar production has declined, with most of the sugarcane now used for the production of rum. Banana exports are increasing, going mostly to France. The bulk of meat, vegetable, and grain requirements must be imported, contributing to a chronic trade deficit that requires large annual transfers of aid from France. Tourism has become more important than agricultural exports as a source of foreign exchange. The majority of the work force is employed in the service sector and in administration. 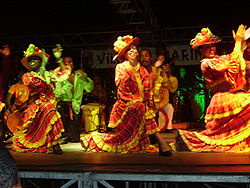 As an overseas département of France, Martinique's culture blends French and Caribbean influences. The city of Saint-Pierre (destroyed by a volcanic eruption of Mount Pelée), was often referred to as the "Paris of the Lesser Antilles". Following traditional French custom, many businesses close at midday to allow a lengthy lunch, then reopen later in the afternoon. The official language is French.

Many Martinicans speak Martiniquan Creole, a subdivision of Antillean Creole that is virtually identical to the varieties spoken in neighboring English-speaking islands of Saint Lucia and Dominica. Martiniquan Creole is based on French, Carib and African languages with elements of English, Spanish, and Portuguese. It continues to be used in oral storytelling traditions and other forms of speech and to a lesser extent in writing. Its use is predominant among friends and close family. Though it is normally not used in professional situations, members of the media and politicians have begun to use it more frequently as a way to redeem national identity and prevent cultural assimilation by mainland France. Indeed, unlike other varieties of French creole such as Mauritian Creole, Martinican Creole is not readily understood by speakers of Standard French due to significant differences in grammar, syntax, vocabulary and pronunciation, though over the years it has progressively adapted features of Standard French

Most of Martinique's population is descended from enslaved Africans brought to work on sugar plantations during the colonial era, generally mixed with some French, Amerindian (Carib people), Indian (Tamil), Lebanese or Chinese ancestry. Between 5 and 10% of the population is of Indian (Tamil) origin. The island also boasts a small Syro-Lebanese community, a small but increasing Chinese community, and the Béké community, descendants of European ethnic groups of the first French and British settlers, who still dominate parts of the agricultural and trade sectors of the economy. Whites represent 5% of the population.[3]

The Béké people (which totals around 5,000 people in the island, most of them of aristocratic origin by birth or after buying the title) generally live in mansions on the Atlantic coast of the island (mostly in the François - Cap Est district). In addition to the island population, the island hosts a metropolitan French community, most of which lives on the island on a temporary basis (generally from 3 to 5 years).

There are an estimated 260,000 people of Martiniquan origin living in mainland France, most of them in the Paris region.

Today, the island enjoys a higher standard of living than most other Caribbean countries. French products are easily available, from Chanel fashions to Limoges porcelain. Studying in the métropole (mainland France, especially Paris) is common for young adults. Martinique has been a vacation hotspot for many years, attracting both upper-class French and more budget-conscious travelers.

Martinique has a hybrid cuisine, mixing elements of African, French, Carib Amerindian and South Asian traditions. One of its most famous dishes is the Colombo (compare Tamil word kuzhambu for gravy or broth), a unique curry of chicken (curry chicken), meat or fish with vegetables, spiced with a distinctive masala of Tamil origins, sparked with tamarind, and often containing wine, coconut milk, cassava and rum. A strong tradition of Martiniquan desserts and cakes incorporate pineapple, rum, and a wide range of local ingredients. 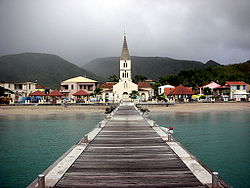